Every year, a group of GDC attendees travel to the show via train, and hold a 60-hour game jam while they ride the rails. A reporter who was on the Amtrak California Zephyr describes what went down.
Simon Carless
Blogger
February 28, 2017

When the announcement came for this year’s Train Jam theme, there was more than a little confusion--but that was appropriate.

After much doubt about whether the Amtrak California Zephyr would even be able to make its normal run--owing to miserable weather and obstructed tracks in the Sierra Nevada--at the last minute, Amtrak and Union Pacific announced that that the Train Jam train would be able to take its normal route.

Thus it was that Adriel Wallick, doyenne and major domo of the jam for the last four years, settled on “Unexpected Anticipation” as the theme for all of this year’s games. She spoke above the cheers of a 300-strong crowd in the newly refurbished Burlington Room of Chicago’s Union Station, christened by the opening ceremonies for this unique event.  For the first time, this eclectic bunch of game developers would have the train entirely to themselves, with Amtrak’s enthusiastic blessing.

The California Zephyr beats a winding path across the continent, taking upwards of sixty hours to reach San Francisco from Chicago, and it’s hard not to appreciate why tickets sell out in seconds once you drink in the views of painted canyons and burbling icy rivers; deserts and snowcapped peaks embrace you on the long journey.

There’s the undimmed romance of transcontinental train travel, of sleeper cars, panoramic windows, and white cloth dining service--the vicious bumps and lurches of freight rail tracks notwithstanding. The vistas and the wi-fi free isolation of the three-day journey do wonders for one’s inspiration, to say nothing of the incubation that occurs when so much brainpower and technical skill can hive together for that length of time.

But beyond all of that: I came to understand Train Jam as a celebration of the miracle of travel in itself. 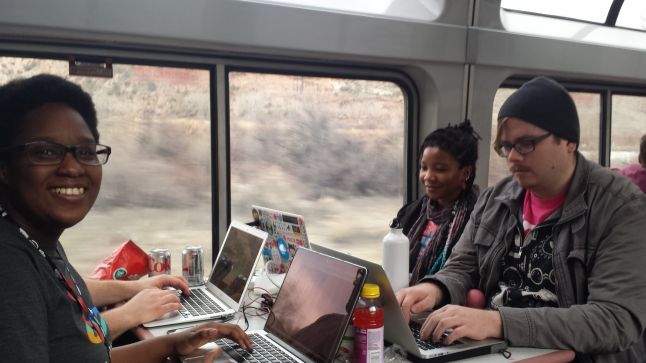 In his famous speech at the Great Dictator’s climax, Charlie Chaplin observed “the aeroplane and the radio have brought us closer together; the very nature of these inventions cries out for the goodness in man, cries out for universal brotherhood.” It’s an underappreciated line in the film that I couldn’t get out of my head as I traveled with a crew of devs who’d literally come from every continent but Antarctica to be on this train.

Despite the generosity of companies like Amazon and Intel in sponsoring far-flung devs' flights to Chicago, there was another unexpected obstacle that emerged for some developers: Donald Trump’s ban on Muslim travelers. Putatively, Trump’s executive order was directed at nationals of seven countries; in practice it’s ensnared countless others who were not from one of the named countries the only consistent factor in enforcement appearing to be fear and loathing of anyone perceived to be Muslim. One such person was a Moroccan game dev whose visa was revoked at the last minute before Train Jam and was thus unable to make it; Morocco was not one of the seven countries enumerated in the executive order.

A train is a liminal space where everyone is a stranger; even the staff, for whom every jammed door or duct-taped vent carries a homespun familiarity, cannot claim to be from the train. It is a rolling knot of crossed paths. Something vital would be lost if the only threads on this train were American in origin.

Train Jam has become a kind of pipeline for diversifying GDC, bringing in more global developers than ever. It has two scholarship programs that serve to get its beneficiaries to both Train Jam and GDC: one for women--cis and trans--and genderqueer people, and the other for developers in non-Western countries. A flight from Johannesburg, Lahore, or Kuala Lumpur would be prohibitive in the extreme for many of these devs, but Train Jam’s scholarships remove that obstacle.

One person who did make it this year, Sadia Bashir, flew from Islamabad, Pakistan. There, she runs the Pixelart Games Academy--the first school of its kind in Pakistan, bringing together gaming talent from around the world to help teach a new generation of up and coming Pakistani game developers. Train Jam ferries developers like her from Chicago to GDC, networking and sharing all along the way. But for Bashir the knowledge shared at an industry conference like GDC is absolutely vital; it’s taken home and fed back to local developers who could never afford to make the trip, or even afford to watch the videos in the Vault.

The internet makes global collaboration and learning possible, but there remains value in the indelibility of a face to face meeting. In the dining car you’re seated with a stranger if your party is made up of fewer than four people.

My antisocial New Yorker self bristled at this at first, but I came to treasure it as I always walked away knowing something new. This gently applied force moves you out of your comfort zone--and it’s the sort of thing that can be most rewarding in a physical setting, particularly one where mentors are on hand to teach you everything from Twine to C+. “Coding in unfamiliar languages” takes on a new meaning here. 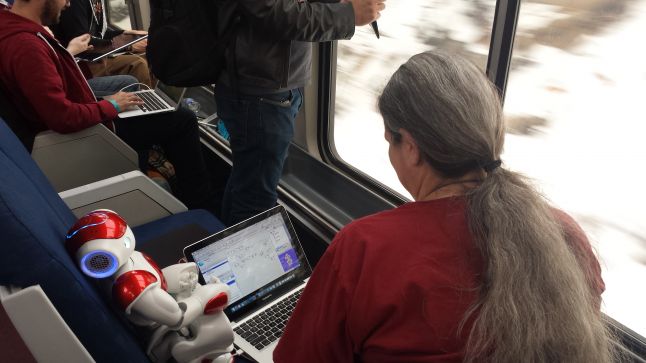 Train Jam kaleidoscopically shakes its participants together in these rolling tin cans, and the resulting patterns are invariably pretty. One that stood out to me is a lovely game made by a truly global team from every continent save Asia: Metro Mori. The game visualizes the afterlife as a paranormal subway system, facing your demons and virtues alike, operating from a minimalist transit map interface.

So many of the games were about travel, and that’s not at all surprising. Kate Compton’s Travels in Od, Metro Mori, or even a collaborative travellogue of the California Zephyr’s route itself--highlighting landmarks along the way like Car-henge or the ghost town of Thistle, Utah--clearly took the train itself as a theme. But aside from the obvious source of inspiration we were all riding in, our very presence owed itself to the act of crossing a border (or ten).

The benefits of free movement are incalculable; the planet becomes a world of neighborhoods where streets 10,000 miles away carry the homey memories of your local bodega. Free movement is not just about the movement of bodies, but of ideas and expertise.

The inkblots of cultural diffusion begin from that moment of exchange. “Seeing someone from South Africa work with someone from Canada on a game is the coolest thing to me,” said Adriel Wallick, who waxed rhapsodic about the “whirlwind of different knowledge bases” that swirl across the twin decks of the train. 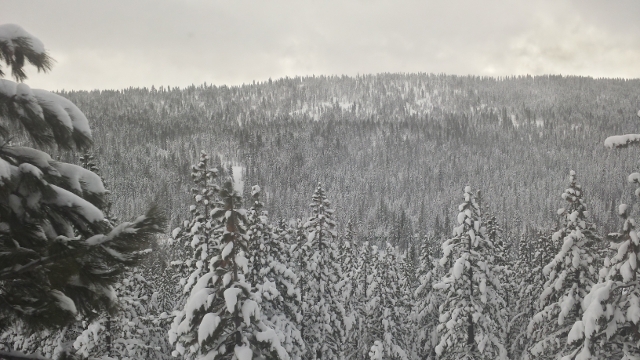 As the Sierra Mountains gave way to gentler hills and the first peeks of Californian palm trees, it was hard to avoid the impression that a bit of magic had happened. Travel is the alchemy of changing one place into another, after all.

More than most forms of long-range transport, a train is a destination in its own right. It’s a kind of rolling hotel where you’re in close proximity with all the guests and staff for three days, and thus the miracle of flight is unraveled into a slow motion film that allows you to savor every change. Cornfields become snow, which become red canyons that give way to scrub, which become verdant valleys. You adjust your watch one hour at a time each day after you wake up, instead of all at once as the flight attendant begins her post-landing spiel.

Less appreciated is the subtle transformation undergone by you the traveler. For the Train Jammers, they walked away in San Francisco having made new friends--or even lovers--and with more than a few accomplishments. Several people made their very first finished game here, while others worked in programming languages or software that they’d never used before. Even I used Twine for the first time, adding a little to a collaborative game that sent up Train Jam itself with the aid of everyone on board.

For many others, this was the first time they’d left their home country or continent, and the first time they’d ever visited America. They were met with an embrace and walked away with something they could only get here: an experience that seals in everything they learned. To learn by doing, in face-to-face collaboration and communication with others, is infinitely more memorable than reading dry PDF documentation online.

The video game industry thrives on events like this; they’re worth fighting for.