The Unforgivable Annoyances of Skyward Sword

Call them staples of Zelda games, or just bad design. Nintendo continues to express the notion that it is alright to constantly annoy the player.
Cary Chichester
Blogger
January 13, 2012
I’m on the final dungeon of Skyward Sword, and rather than spend time collecting treasure and upgrading equipment, I’m doing my best to reach the credits and finally end this game. I had no idea after hearing so much praise for it that I would be so frustrated while playing it. The only game in the past year that has tested my patience as much as Skyward Sword is Dark Souls, except Zelda doesn’t offer any relief from the frustration. While ripe with many enjoyable experiences, there are some annoying elements of Skyward Sword that almost completely ruin the experience.


I couldn’t quite figure out why these things annoy me so much in this game compared to other Zelda games, as many of these things are Zelda staples. I believe the main reason is that before playing Zelda I had finished all of the other Game of the Year nominees, and going from playing those games to Zelda feels like a step backwards. Without going too far into Zelda’s design, I’ll just look at the ways Nintendo patronizes the player, which is really what got to me.

Low Health Beeping: Everyone knows this one. Long before Navi started nagging players, they were constantly subjected to a beeping sound to signify that they were low on health. This might have been the only solution to conveying low health a few decades ago, but they’re way past due on finding a less hair-pulling method of conveying this. They actually make it worse in this game by having your companion chime in when you’re low on health, and she has her own annoying beeping sound. That’s right, you get DOUBLE BEEPING when you’re low on health. 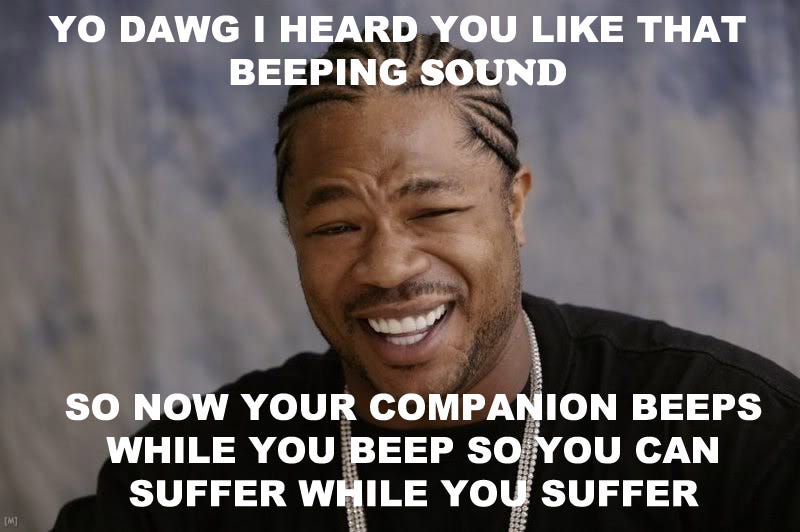 I was slightly annoyed when playing Modern Warfare 3’s campaign to find out that in addition to having your screen turn red when you’re injured, they constantly flash the text “You are injured. Get to Cover”, as if I didn’t already know that. Several levels later however they stopped flashing the text, assuming that I had learned the signs of low health by then. Nintendo however, seems to never assume that you have properly learned something.

Dowsing: You use dowsing in this game to find important objects, and every time you need to find a story item you are prompted to use dowsing by a flashing icon on the screen accompanied by another annoying beeping sound. Until you actually use dowsing, the beeping will not go away, as the game is sure that you haven’t figured out by the 10th time just how to use this mechanic.


There is one area that the player keeps returning to, that instructs them to backtrack to other places in the game to retrieve objects, so they pester you to use dowsing every time you go here and learn of a new important object; the problem here however is that dowsing is only useful when searching for nearby objects in the same area, and the objects they send you to search for are in completely different parts of the world. They end up pestering you constantly to use something that is COMPLETELY USELESS until you actually get to the right area, and you don’t need dowsing to find the right area because they tell you where to go and mark it with a colorful beacon. Once you get to the right area, then is the proper time to use dowsing, but the player probably already used it long ago to stop the game from beeping, meaning the game won’t remind them when they ACTUALLY NEED REMINDING.

New Items: Usually when you receive a new item you’ll have to read a description of it, however Nintendo’s definition of “new” here is somewhat interesting. When you encounter a new item you will have to pause to read its description, and from that point on you won’t see the description pop up when you encounter the item again. However once you quit your game and later load your save to continue, every item you encounter will be considered “new”, so you will have to pause and reread descriptions for items you already own if you encounter them again. I’ve caught about 50 blessed butterflies right now--they’re everywhere--and every time I catch one after loading my game I have to watch that text pop up and see the same animation of it being placed in my inventory that I’ve seen dozens of times already. HOW IS IT THAT THE GAME WON’T ASSUME THAT I KNOW WHAT A BUTTERFLY IS AFTER CATCHING 50 OF THEM!?!?

Fi: *sigh* I don’t know Nintendo, why do you do this to me. When I played Spirit Tracks, my companion was Zelda, and she proved to be a helpful and entertaining companion; describing her as “annoying” never even crossed my mind. Then you gave us Fi, who, like many of the annoying mechanics described above, simply assumes that the player has no idea what’s happening in the game. I don’t need to go too deep what makes her annoying, as I’m sure most people know by now, but she will insist on giving you advice when absolutely anything notable happens to the player in the game.

There is, surprisingly, an exception to this. At one point the player acquires an item  that lets them safely pass through an area where they would normally take damage. When I entered the area with the item equipped, I saw my character pause for a second and noticed that the item flashed briefly, and then the game continued. This lasted maybe 2-3 seconds, involved no reading or outbursts from Fi, and successfully conveyed important information to me in a non-annoying manner. I was amazed. I had no idea that Nintendo actually possessed the ability to subtly explain something to me, meaning that they simply chose not to for the majority of the game.

You’re either an idiot, or a genius: This is something that confused the heck out of me. The puzzles don’t feel condescending at all, they offer a very respectable challenge. There were more than a few moments where I was stumped on how to proceed and enjoyed working my way towards finding a solution. But then how is it that these puzzles can be this difficult if the game is simultaneously assuming that I’m incapable of doing simple things myself. The game is assuming I’m two different people, one who enjoys solving mental challenges on their own, and one who needs help doing everything else. Here’s some of the things the game expects from you:

So this game is pretty much terrible--well, actually--I guess it’s not. The motion controls works at least most of the time, the story is interesting, and the level designs are fantastic. I’m just saddened that I was unable to enjoy most of the game because it tried way too hard to always help me instead of letting me do things on my own. I’m sure I could nitpick about how there’s no way to skip text, dialogue choices are meaningless, and you’re no longer able to save anywhere in the world, but what I’ll always remember are the many times the game pulled me out of the experience to help me enjoy the experience. Nintendo should be able to teach players about the game without nagging them constantly; if you can’t trust the player to play the game without always needing to remind them on how to play it, then you haven’t really taught them anything.