If you're a sucker for outlandish, quirky, or otherwise 'out-there' video game hardware, you'll want to feast your eyes on the Ocelot Arcade System.
Chris Kerr
News Editor
May 15, 2018

If you're a sucker for outlandish, quirky, or otherwise 'out-there' video game hardware, you'll want to feast your eyes on the Ocelot Arcade System.

Designed and built from the ground up by Mathew Carr, the Ocelot is a unique vector-based home-brew console that outputs to an oscilloscope, resulting in some rather funky pseudo-retro visuals.

As explained by Carr, the system uses a high-speed, precise, dual-channel DAC to generate 2D vector outputs, while two phono connectors on the side of the unit allow it to be hooked up to an oscilloscope configured in X-Y mode.

The Ocelot's microcontroller is powerful enough to calculate and draw complex 2D and 3D wireframe graphics in real-time, and is also capable of producing four-channel polyphonic sounds.

As for how you control the device, a 9-pin port on the front panel is compatible with Amiga and Atari joysticks, and can also power and read both Master System and Mega Drive controller pads.

Given the Ocelot is a one-of-a-kind creation, Carr has developed some exclusive titles to show off the hardware: an arcade shooter called Starlynx (shown below), and an Asteroids inspired effort dubbed Mattsteroids.

You can see both titles in action by checking out Carr's in-depth Ocelot explainer, where he also reveals more about how the fascinating console works, and how he went about building it. 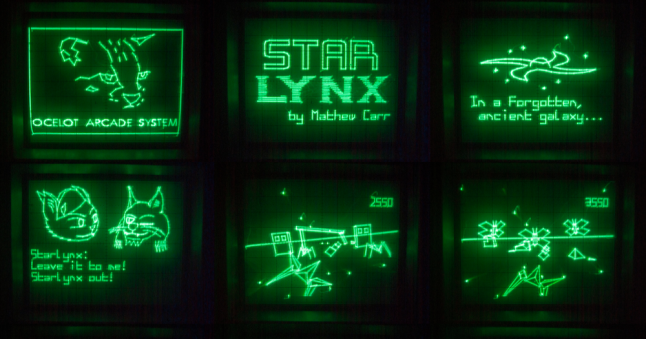