The Magic of Reality

A look at how games based on realistic portrayals of life can still create unique and powerful stories.
Alice Rendell
Blogger
April 03, 2014

Video games transport us into a fantasy world, or propel us into a situation where we play as larger (and often cooler) versions of ourselves, complete with powerful weapons and epic enemies. The familiar premise of some chosen hero being predestined to be the saviour of the world/kingdom/day is abundant in game scenarios and is not necessarily an unwelcome thing. Theses types of scenarios promote “epicness” and remove us from the reality we seem determined to escape. They invoke feelings of power and grandeur in us as we play. Who doesn’t love being the most badass Master Chief, or the pre-destined hero Link? Taking down a Colossus or some other monstrous goliath pitted against an insignificant David who eventually conquers all. It is undeniably exhilarating and pride-inducing and the terms awesome, heroic and epic are well placed within these worlds. However, in the last year or so there has been a new wave of games centered around “normal” life. The comparatively boring and mundane universes of Gone Home and The Novelist have replaced the fantastical, but they still manage to deliver epic and powerful stories without fantasy and magic to back them up. So why is it that the fantastic and the grand are still dominating game scenarios? If we compare games to films or literature (which they so frequently are) the genres of fantasy and sci-fi are still popular, but the amount of stories about everyday people going through everyday problems are just as common place. So why in games do we always try and step away from reality?

*Spoiler Warning: I talk about the main plot and ending of Gone Home*

When I first picked up Gone Home I knew almost nothing about either the gameplay or the story other than I (the avatar) had just arrived home and my family were not here, with no clear explanation as to why. My head immediately came up with a dozen or so different scenarios as to what could have happened. Many different dramatic theories entered my head from plausible kidnapping to more elaborate notions of ill-timed wormholes and parallel dimensions. Ok the last was quickly rejected as a far reach but the point is my dozen or so ideas were all concerned with fantasy, the supernatural and/or the sensational. My favourite theory - or at least the one that seemed most likely - was that the house was apparently haunted and my little sister, who had been kindly leaving me little nuggets of information all over the house, had been dabbling in the supernatural and got into trouble with some mightily pissed-off ghost. A theory which I thought was almost certainly confirmed when I came across the ouija board and other ghost hunting paraphernalia that was left behind in a secret room. The arrogant part of my brain proceeded to exclaim “I knew it!” whilst at the same time being slightly disappointed at such an obvious conclusion to the mystery. As I continued through the game it gradually dawned on me that there was nothing supernatural going on in the slightest, which actually peaked my interest in Sam's story even more. What could possibly have been so important in the “real world” to account for a missing family? By the time I reached the end and discovered Sam had simply run away with her girlfriend to escape the intolerance from my (Kate’s) parents, it was so far away from all my ridiculously over-the-top assumptions at the beginning that I scolded myself for underestimating and condemning Gone Home for being yet another boring ghost story. 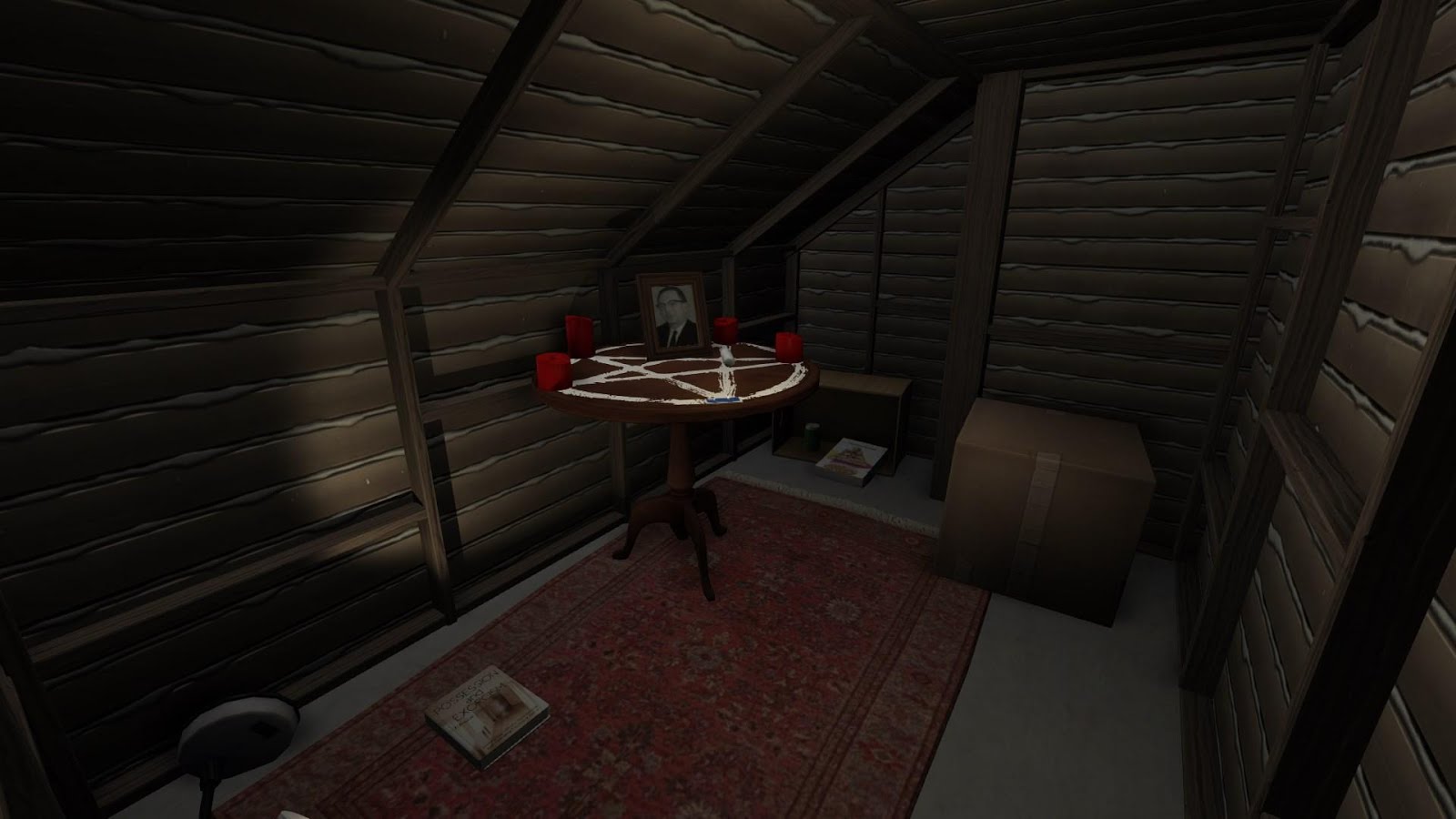 Ok so I know that The Novelist does places you (the avatar) as a sort of ghostly presence in the game, with the goal of meddling in the lives of the Kaplan family as they go about their business. However, I still want to count it as a story based on reality as I believe the supernatural element of the game is more of a mechanic for driving the interaction with the family members than a core necessity for the story. The Novelist focuses on the power of choice within an arguably muted and undramatic situation, that of everyday family life. However, the game builds upon its own absence of drama in the story by evoking real, emotional uneasiness within the consequences of choices and creating a powerful sense of drama from no particularly dramatic event. During the game you are asked over and over again to try and juggle the main character Dan’s job as a novelist with his wavering marriage and young son. The result is the increasingly tense task of trying to balance being a good father, husband and novelist as well as the impossible task of trying to make everyone happy. This idea of balancing life is such a familiar scenario to those even without a direct comparison to the situation, that it has almost universal resonance. Simply replace husband with friend, novelist with a hobby or anything else that fits in with your life and the essence of The Novelist will pull on a least a few common threads. Personally the scenario is one very removed from my own life but as I was playing I certainly felt a few heart-sinking moments when I had upset my son because I had no time to play with him, or I’d missed a big work opportunity because I was trying to keep my family happy. The reality of the The Novelist is that it manages to tell a dramatic story with subtlety and restraint, which is a welcome change of tempo from the urgency of the save the world scenarios. The intensity of the relationships which you watch from behind the scenes creates an instant emotional attachment to the characters, and their desires are humble and understated enough to not feel as though your decisions will be of any great impact. But the impact is huge, and that is why it is so powerful. 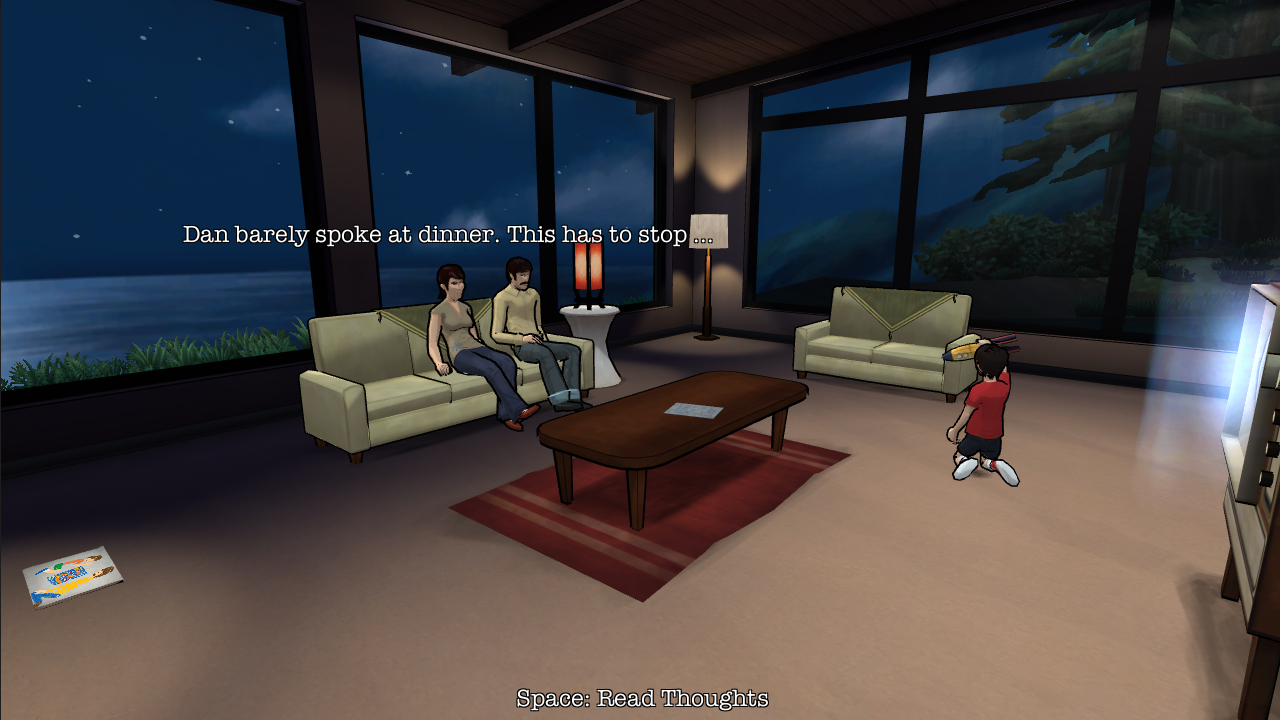 For those of you unfamiliar with this game Fragments of Him was a Ludum Dare game jam entry from indie company Sassybot and has now been released on Kongregate. I do believe the game is in further development for a V2 so I will just comment on the version playable on Kongregate, as the game’s narrative still gave me an incredibly emotional reaction even in its alpha state.

You are introduced to the game knowing that the main character's partner has died in a car crash, an obviously dramatic and upsetting scenario, but the game places you in the aftermath of this disaster while never showing you the event itself. Throughout the game you explore various different scenes such as parks, homes and restaurants. Each scene is full of memories from this couple’s lives and you are asked to find objects which unlock their memories and then relieve them through a lens of pain as the character tries to come to terms with the loss of the person he loves. As someone who lost a parent in the last couple of years I felt like I was relieving 2 years of grief and bereavement condensed into a 20 minute story, which of course is not only emotionally devastating but was completely unexpected when I first went to play the game. However, the fact that game was stirring up emotional nuggets that I would normally keep well hidden did not deter me from continuing, in fact it was the exact opposite. Fragments of Him captured the notion of grief with such gut-wrenching yet majestic accuracy that this traumatic emotion was somehow transformed from one anchored in pain, to one edged with melancholic beauty. As you progress through the devestation and anger of the character you see it eventually being turned into hard-earned acceptance. Sassybot have obviously been careful about how they dealt with this topic, that being one of softness and obvious respect, which only enhances the power of the story. The subtly of Fragments with Him allows the player to explore something dramatic without the need of being sensational. 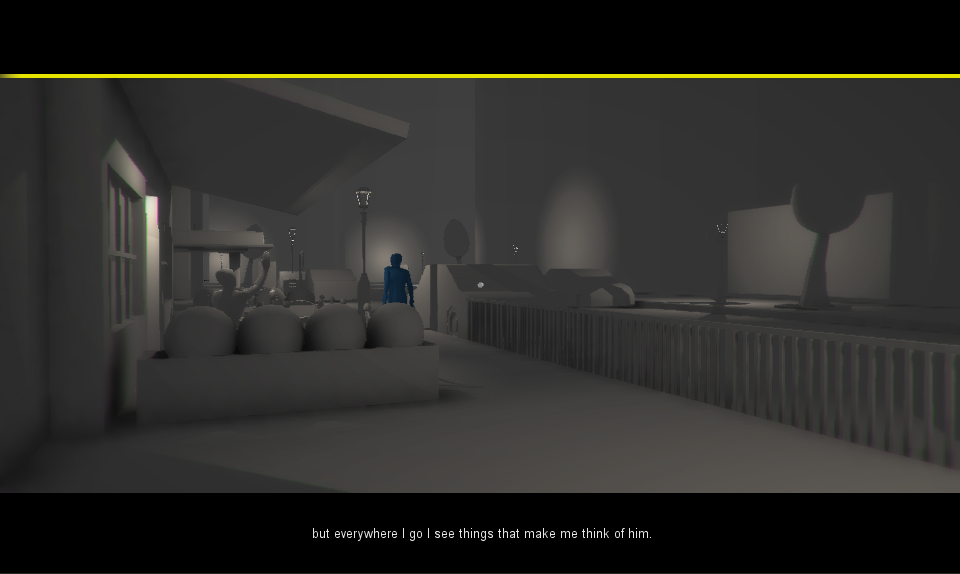 The above games are just some examples of powerful stories based on reality but it is still a fairly unwalked genre. There is the danger to believe that games about normal, everyday things can be mundane and bland, but what games like these prove is that you don’t need epic battles through space, or neverending quests to save the world to create a strong and powerful story. Characters don’t need to be muscular heroes to be interesting. Environments don’t need to be dripping in magic to be sensational, and stories do not need to be eventful to be dramatic. Games can be powerful and emotional by purely relying on the humbleness and magic of reality.