The Outriders approach to looter-shooter design

Even though loot was a "day one" part of Outriders its creators explain why creating a loot system that worked closely with the players' skill tree took a long, long time.
Bryant Francis
Senior Editor
April 13, 2021

If there’s one kind of game that Polish game studio People Can Fly has been known for in the last decade, it’s shooters. The company’s done contract work on titles like Gears of War and Fortnite, found a cult following in its original game Bulletstorm, and now it’s stepping up its game with the looter-shooter Outriders.

It’s no surprise that when you pick up Outriders, the gunplay and abilities feel exceptionally good. But to launch a massive game like this in 2021, where you want players to come back and play together over and over again, means your studio needs to learn about what captures players’ attention: that sweet sweet loot.

Game director Bartosz Kmita and producer Piotr Nowakowski sat down with Gamasutra to discuss what the studio has learned in a years-long development process that ran right up through the release of the game’s demo in January.

Brother may I have some loot

Kmita explained that figuring out Outriders’ loot system began with a pretty conscious decision in 2016, as the studio worked to figure out what title it would be working on next. Surveying the competition, he said the team became conscious of how many other shooters on the market has begun to integrate loot systems, like Borderlands, The Division, and beyond.

“We realized that those other games that still had loot were still more shooters than system-driven games,” Kmita said, explaining that in many of these games “you don’t have a lot of freedom to create your builds and to play with it.”

Kmita and Nowakowski said there was a lot of confidence at the studio that they could put out a competent shooter, but to properly understand a good loot system, they expanded the range of games they were studying to figure out what worked and what didn’t. “The competition,” as Kmita put it, expanded to older titles like Final Fantasy X, so that the team could “merge fantasy games with shooter games.” 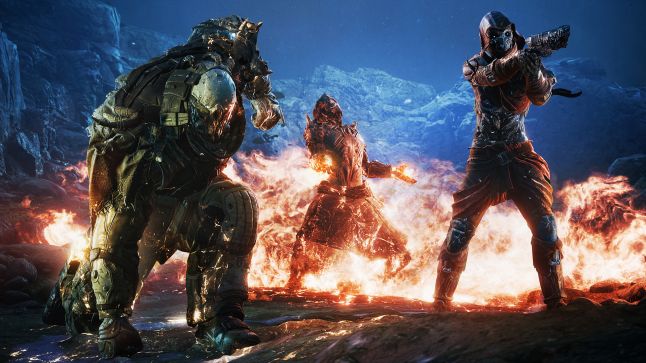 Loot in Outriders goes beyond just pushing a player character’s raw stats (like damage, health, armor, etc.) higher and higher--it also helps players experiment with the different abilities that come with each of the game’s four classes (the Devastator, Pyromancer, Technomancer, and Trickster). Each class comes with a set of abilities that can be unlocked to match a player’s playstyle, and those abilities are each boosted by specific pieces of loot.

“You have to build your game around the [loot] or you don’t have a loot-based game, you have a [shooter] with loot in addition to it,” Kmita said. He gave credit to other developers who’ve found interesting twists in the space, but said that in their research, he found that players wanted more agency and ability to experiment with their playable character. “That’s why all the choices and tools we gave to the player were related around loot.”

“Skills are 50 percent of the gameplay…We know that this has to be this whole design philosophy behind the loot. It has be to connected to your tools of destruction. It has to be connected with your movement, your behavior, with all the stuff you’re doing in the game.”

Speaking of player behavior, Kmita broke down how early on, it was difficult to get players to conceive of the game’s loot as impacting their abilities. He described how early playtesters would equip items that were of a higher level, and distinctly showed a higher power level, but they would still feel weaker and die. “That was super hard in the beginning for us--we tried to make it work, we changed the distribution of the loot to try and help people understand our game takes a different approach.”

“We were a little bit afraid, because if people look at the game and go ‘okay the numbers drive the gameplay,’ we’d fail, because people would be failing and people would not be playing.”

Another struggle with those early playtesters was that early in the game’s development, there weren’t plans for classes at all. Players would pick from a pool of abilities to create their own character, and use loot to augment those abilities.

The problem: “Players were building such unrealistic builds!” Kmita exclaimed. It’s not hard to see how someone might grab say, abilities from the Devastator class, meant to tank and soak up damage at close range, and the Technomancer, meant to support from long range, and realize they don’t work well together.

This was apparently even behavior that came from experienced players, who would have been more familiar with creating synergies with abilities. Kmita said that’s actually what led to the creation of classes in Outriders.

By silo-ing the many abilities People Can Fly created into different classes, it helped players better identify what abilities they wanted to build their character around--and therefore, which of the many, many pieces of loot they were picking up that fit their builds.