The Fun is Over, We Have to Get Serious about Games

Players emulate what they play into the community: when games don't take violence and trauma seriously, they become joke subjects. We need games that encourage players to think and reflect on actions, but it can be hard when the environment fights change.
James Cox
Blogger
December 11, 2017

Good While It Lasted

On December 6th 2017, Joe came into my room asking a question, “Hey James? Do we have any Steam Keys left for You Must be 18 or Older to Enter?”

“We got an email today from a Youtuber asking for one.”

“Maybe he just wants a key?”

Not more than an hour later, we got a message on our company Twitter: “Hi! Do you still have keys for ‘You Must be 18 or Older to Enter’?”

I called to Joe, “Hey Joe! Someone is asking for a key on Twitter. I wonder what’s going on.”

He responded, “Maybe we got a new write-up somewhere?”

With such an untraditional horror topic, our game had made its rounds both online and in public, landing us Media Choice at IndieCade 2016, a Student Honorable Mention at IGF 2017 (with the game even being featured in a comedy bit during the award ceremony), it was shown at Slamdance Film Festival as part of their return to Park City with videogames for the first time in 10 years. It was displayed at SXSW as part of their inaugural student showcase, and was covered in Paste Magazines “Best of Toyko Game Show 2016”

Occasionally press would reach out to us to talk about the game, and I would often use the opportunity to promote sex positivity, discuss my desire to subvert the harmful genre tropes of horror, and of course to talk about how dang well the game works as a horror. I like to call it a tangible horror game; a frightening experience many people agree is “too close to home.”

But no, there was no new press for You Must be 18 or Older to Enter.

Joe messaged back our Twitter companion “We do have keys but the game is also on Steam for free!”

Our Twitter companion immediately responded. “I think it was removed from the Steam store. I cannot find it.”

We were confused. I sent a message to Steam Support asking if there was a bug. We began looking through Steam press releases trying to figure out what could’ve happened.

With that said, You Must be 18 or Older to Enter continues to be available on Game Jolt and Itch.io for free and DRM free.

While I will be using examples from distribution sites and platforms, I want to address a larger games cultural issue. One I’ve been meaning to write about for a while but never quite had the fire to do so. It's one of the reasons I made You Must be 18 or Older to Enter. I now know there is no one way to explain my concern. The problem is a self-serving web of games culture. One that Nathalie Lawhead spears in her posts regarding Day of the Devs and her follow-ups to it. If you haven’t read them, you should.

To paraphrase, during Day of the Devs, Nathalie Lawhead’s game Everything is going to be OK was ridiculed by younger players. In her words, Everything is going to be OK is “an interactive zine based on abstract life experiences about trauma, PTSD, and surviving difficult situations.” It’s a game that deals with serious topics and makes you think about them. Nathalie looks towards Youtubers and streamers as the source of this poor behavior. As influencers and trendsetters, these video-creators demonstrate to young players how to interact and respond to games. The players didn’t respond appropriately at Day of the Devs, but they learned their behavior from somewhere. I’d like to expand on her concern and contribute to the conversation. I don’t think its just streamers and Youtubers, I think it’s a cycle.

If I Didn’t Want to Be Banned

In Nathalie’s follow up, she points out that a primary criticism of her work is “if [she] didn’t want to receive toxicity then [she] should have made a funner game”

In that same vein, if I didn’t want to be banned from Steam, I shouldn’t have made You Must be 18 or Older to Enter. The logic follows. If the game had monsters, or violence, or death, or used other traditional horror aspects over childhood curiosity, it probably wouldn’t have been banned from Steam.

Then again, I can’t say this hypothetical alternative game would have gotten any attention or made it onto Steam in the first place. It would be one drop in an evergrowing sea of horror games; games with dedicated loving developers who may not see a salary’s worth of purchases due to an overcrowded market.

At Seemingly Pointless, an aspect of being low-budget Indies that we embrace is our ability to take risks that larger companies can’t. It’s both a practical and individual drive. For practical, we can’t compete with larger companies. As a two-brother company, we don’t have the manpower or resources to make a competitive First Person Shooter. Why bother competing with Call of Duty or DOOM? Secondly, I firmly believe that Nathalie is right that mainstream game culture needs to be expanded to encompass a wider range of digital experiences. More so, if Indies want to survive, expanding into uncharted territory is exactly what we need to do.

In the past year, I’ve heard fellow developers repeat “it's harder to make a living on games now than it has ever been” so often, it might as well be a mantra. Discussing the climate with a prominent Indie developer, they revealed to me that even with a substantial following, they didn’t have a blow out release day on their latest game.

I began wondering: what’s the underlining similarity in the content being reinforced? What are players and platforms expecting to consume? 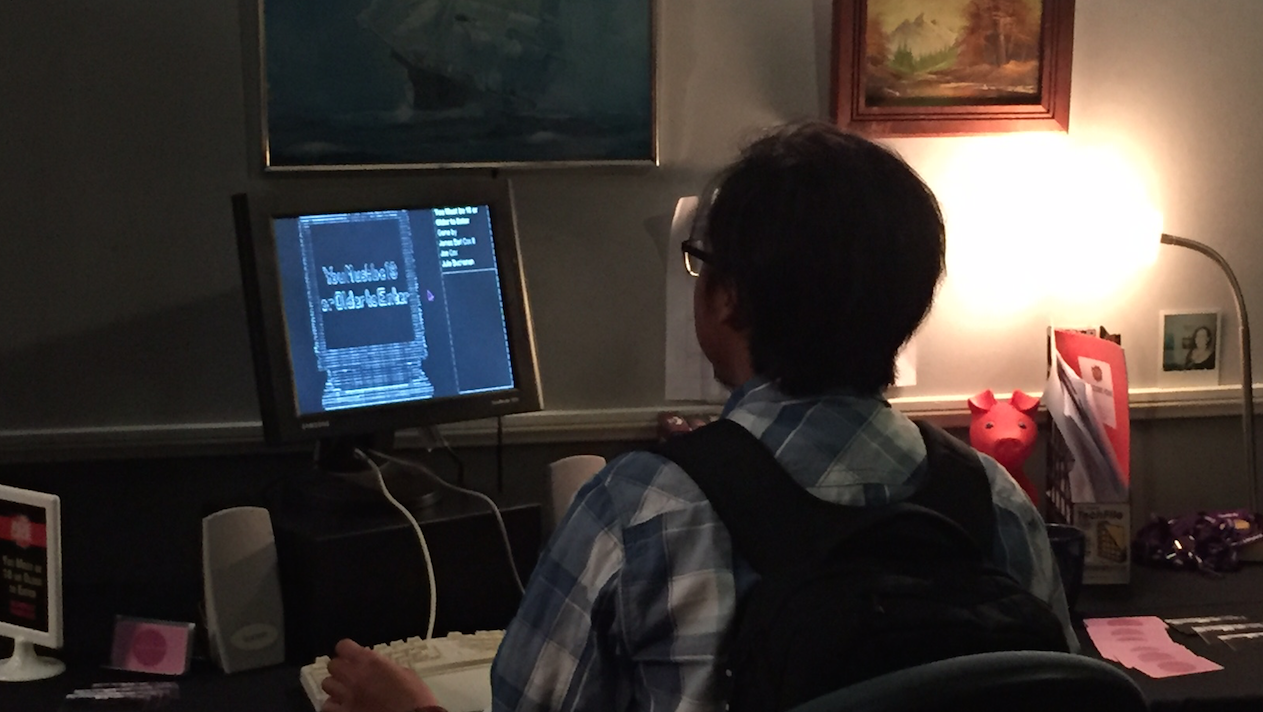 And according to Oxforddictionaries.com: Printed or visual material containing the explicit description or display of sexual organs or activity, intended to stimulate sexual excitement.

What’s important in these definitions is how the intent of the material matters. In You Must be 18 or Older to Enter, there is semi-NSFW content. We make use of ASCII filters to blur naked bodies. This is done to help separate the content from the sources, help separate the content from being actual porn, and to help set the game’s mood. By using ASCII art, it’s hard to fully interpret any image in the game. You can generally understand that something naughty is going on, but you won’t “get” the picture. It sits the player in the role of a kid exploring these adult worlds: curious, confused, anxious, caught.

The legal reasons for why the game isn’t pornography are long winded, but the gist is that the game has artistic merit beyond the individual ASCII images; and the content of the images are debatable in both what they depict and purpose.

This situation brings backs memories of the eternal “Do games cause violence” question, a question we continue to answer with “no, they do not.”

But why should that matter for a distributor’s interpretation, and how does it feed into the cycle? To begin, it means that the platform is curating the experiences their players can interact with. It means they’re making judgment calls on what players touch, which in turn reinforces how players talk about games: how they think about games.

When Saint’s Row the Third was released in 2011, a friend shared a gameplay segment with me. They were excited about how zany a particular level was and wanted somebody to see their in-game antics.

Before the level begins, a man tells your character that they want to sneak you into an auction to “kick the Morningstar [a gang] right in their collective pussy.”

When your character asks if you’ll be masquerading as an eccentric millionaire, your companion responds “Kind of. I’m gonna auction you off as a sex slave.”

Your character responds with “Fuck that.”

And they, in kind, retort “Oh, quit being a bitch and get in the van.”

Further, here are a few other examples of games touching on sexual themes. They lack the same one trait that You Must be 18 or Older to Enter has.

Perhaps with less ASCII naked confused bodies, these titles all but advertise themselves for purposes beyond good clean fun. Regardless, there is an ocean of platform approved mainstream games that have even these provocative games outmatched..

Thinking About the Difficult

Often while showing this game at festivals, players will talk with me, recanting frightening stories of their youth as they tried desperately to understand that strange new adult world. The other games above don’t make the player think seriously about sex, nudity, or such. For instance, Super Kinky’s release date of “Coming Prematurely 2018!” can be viewed as an ironic joke. But You Must be 18 or Older to Enter opens up discussions about these topics and makes the player ponder them. Something that should be applied when experiencing all games, especially violent games.

You Must be 18 or Older to Enter wasn’t my first brush with partitions and age gates. Back in the summer of 2016, a USC classmate, Joe, and I were accepted to Dare to Be Digital, a videogame development competition in Scotland. Our pitched game was Our Own Storm [now canceled].

When it was time to show Our Own Storm at the festival, organizers put it behind a partition.

Covered in KillScreen, our goal was to humanize the characters you play as; we wanted players to feel the weight of digital actions. We wanted them to stop seeing the enemy as “the other.” Your character is shot, then you become your killer. The characters never scream, there was no digital blood, but it was too much for some people. It’s conflicting. You never get to be violent. You never fire a gun. It makes you think about death, and it carried more weight than most games where you can kill.

Even before Hatred released in 2015, it wasn’t taken seriously. The whole thing was a joke to its audience from the start. Developers and gamers loved to hate it. It was too extreme. It was as much an extreme joke as the comments on its Steam page are.

As a game that allows the player to embody a mass shooter, comments on the Hatred rating page include messages such as 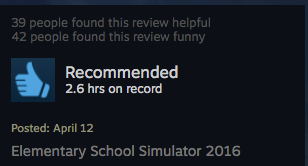 By not taking their topic seriously nor encouraging us to think critically, games like Hatred normalize and encourage comments like the ones above. And while games do not cause violence, this doesn’t mean they won’t desensitize us to fictional violence and continue to allow poor behavior. That may not seem to be an issue on the surface, but it’s exactly why You Must be 18 or Older to Enter works.

When you walk through a room and hear TV gunshots. It means noth