A few years ago, I did some research on coop games and I found two articles that were really inspiring:

While Tanya Short and Asher Einhorn focused on the player, I decided to investigate the design of the games. After all, if we cannot change the way humans interact with each other, maybe we will have to use the game to modify a player’s behavior.

I did this by reducing the co-op behavior to its simplest expression, splitting it apart into four different atoms, each one representing one specific way to play in a coop game.

This article only concerns a Players Versus Environment-type of game. 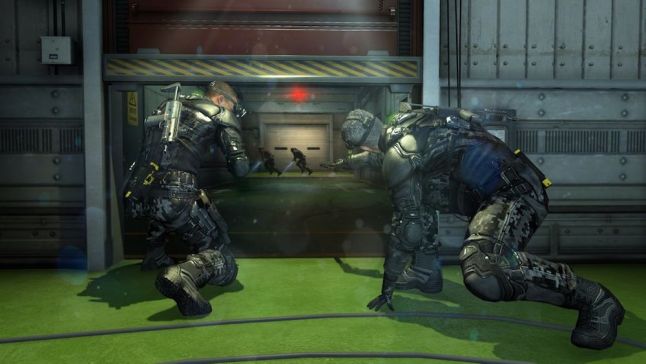 In the co-op campaign of Splinter Cell Blacklist, Sam Fisher and Isaac Briggs are working together to complete their objectives of protecting widows and orphans. However, in the field, one agent can clear the zone while the other waits at the beginning of the mission.

In a Gate co-op design, the players don't have to collaborate with each other until a gate blocks both of them. It's a pretty classic design. It relies on good communication with the team to know who is going to do what and when. Even so, players can still go their own ways, with minimal interaction. The burden to make the experience fun is on the players, making the experience either awesome or bland.

How to identify this type: If one player can complete the challenge for the other team members but is blocked until everyone is ready to continue (moving to a specific location, pressing the "A" button, etc...), you have a Gate co-op design.

In this type of game, even though the players are a team, one super player can theoretically do the job.

This is the most used co-op design: it relies on having a challenge mechanic so incredibly hard that having more than one player is a necessity. Raids in MMOs are most of the time designed for a well-prepared team, but there are always players that find a way to solo them. Obviously, that’s rare, but it is possible. To work, this kind of design needs to be associated with a good difficulty balance, allowing the players the freedom to collaborate as they want to complete the challenge.

How to identify this type: You have to select the main challenge mechanics of your players and remove it. Those mechanics can be timed challenge, invulnerability or a homing one shot kill. If a single player can finish your challenge, you're probably designing a Comfort co-op experience. 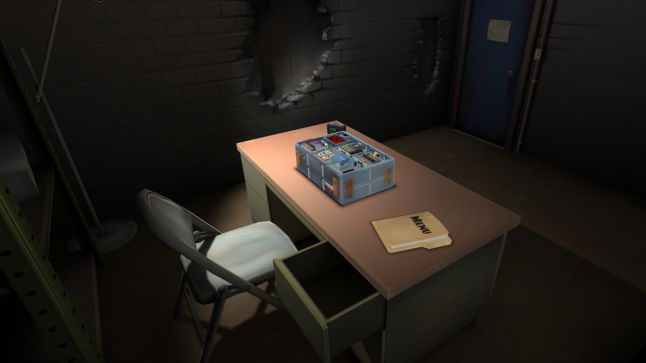 Example: Keep Talking and Nobody Explodes

In this game, a defuser is alone with a bomb while the expert has the manual to crack the bomb. To defuse the bomb, the team needs to communicate about the puzzle they are facing. The defuser and the expert each have a unique task to do and they cannot switch until the party ends.

In a Class co-op design, each player has a unique setup whether that be skills, environment or handicap. To succeed, each player needs to complete their task. Most of the time, communication is essential, especially when they don't share the same environment. In a game like Rayman Legends, the two players can easily see each other’s needs and promptly interact with the level in order to progress.

How to identify this type: It can be tricky to identify if you're designing a Class co-op game. It's not because you have a warrior, a ranger and a wizard (yes, I'm looking at you, Gauntlet) that means the game is Class co-op. The mechanics in your abilities must match the challenge in the level design: Only the thief can reach this level to open the door? You have it. The wizard can heal and jump on the back of the warrior while they cross a lava floor? Now we're talking. 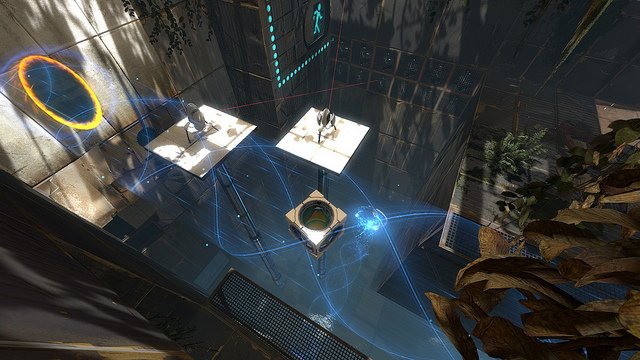 Most of the time, we mistake Class and Job because of their specializations. I mean, if a paladin has so much HP and so much armor, it should tank, right? Yes indeed. However, it's not because the paladin is the class for that. It just happens that it is its specialization.

When I talk about a Job co-op design, specialization is nice-to-have but it's far from mandatory. In Portal 2, the robots Atlas and P-body have the exact same skill sets. That allows the players to choose who is going to do what, depending on their own skills or on their preferences. Having the same abilities don't define this genre. It's the need for the player to unlock each other. To be able to complete the level, a robot needs to create a path for the other and vice-versa. No one can reach the next door by themselves.

Communication is essential in this design. Players must be able to change their plan, maybe because they had better skills in a specific challenge (timed platforms for example) or they saw a puzzle they know they can solve.

You need to make sure that the players have to help each other. That often means that a gate will block one player only to be unlocked by the other player. The danger here is to design levels in silos, making the collaboration dull. To correct that, you have to make sure that the players can trade places at any time. This will improve empathy when a player is not able to perform a task. Empowering one player to help another is always rewarding. In this case, it's also helpful for the entire team.

How to detect this type: Basically, if you're not designing one of the other atoms, you're in a Job co-op design. The players must be able to switch their tasks anytime to unlock their progression. That means 2 fundamental things:

Designing for the 4 Atoms

Let's take a simple situation and adapt the design for each atom: The players have to bring a broken car into a closed garage.

Why is this important? Knowing theses categories will help to bring focus on a design and to target your audience more easily.

It's not a magic formula though. You don't have to choose one category and stick with it. Most of games do a mix between these categories. There's always an atom that is core to the experience at some point but the other ones are often revolving around it.

For instance, Zombicide, a board game, switches between comfort, role and gate, depending on the level you're playing. And it's one of my favorite co-op games because it’s evolving. Each level has its own specificity, always based on a solid ground. You can play a map where you must separate in two groups at first to open different doors, then kill every zombies in a room, to end by getting everyone to the exit.

Within the same game, even in the same level, you can design a four atoms experience, as long as you understand how to use it. I truly believe the more focus your experience is, the more fun and rewarding your game will be.