The Feeling Of Control 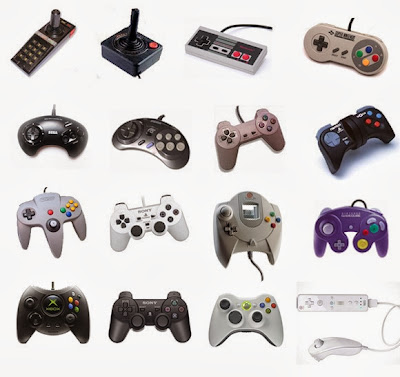 I think the first controller I have ever used was the 'NES' controller. It's fun to recall memories of this period of time. I was still a kid and I wasn't that 'critical' about gaming experiences. I loved to play on the Nes and didn't experienced any difficulties with this controller. This had everything to do with the lack of other systems, size of the industry, and ofcourse the knowledge we now have today. There wasn't anything better at that time. I have to say, one of the great things about this controller is that it's very 'light' in weight. Especially great for small (kid) hands in my opinion. 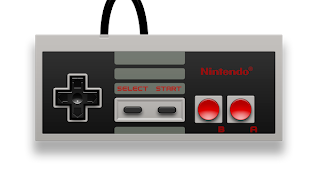 I vaguely remember the release of the 'Super Nintendo'. I immediately adored the roundness of this controller. I thought it had more 'style' and a less 'prototype' image as the old 'NES' one. Most of my childhood gaming went on playing the SNES. Playing Donkey Kong, Super Mario Bros, and Super Mario Karts. I never owned one myself. Similar to the NES. I always had 'friends' that got one for their birthday or christmas. Also this controller shares the 'lightweight' feeling like the old NES. Because it had more buttons, I had the feeling my 'control' was somewhat extended. I remember it being a big deal in our classroom. Little boys, convincing eachother which one was better. More buttons was great! At least that was the illusion. 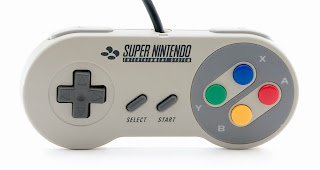 One evening it was 'Sinterklaas' a Dutch celebration that looks like 'Santa Claus', but is few weeks before Christmas. 'Sinterklaas' (My parents), bought me a Playstation. This was actually the first gaming console I actually owned myself. The controller was 'ok' it felt more egronomic. This was also very important, because gaming sessions were increasing in time. If I remember correctly, shortly after they released a new PS1 controller with the 'analog sticks'. I was not blessed with a lot of money, so I was disapointed that these were released after I got the PS1 already. It was a great add-on, and when having knowledge of this new controller, the old PS1 controller felt outdated. Using the arrowkeys was something from an old generation. At this point I was getting older, but my hands were still small enough to 'like' this size of controller. 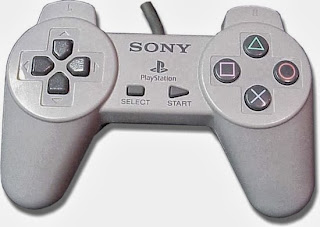 I have to be honest here, I did not play much on one of these consoles. I do remember having a Sega Saturn for about a week. The DreamCast I played once at a friend. Playing Mortal Combat on the Sega Saturn brings back great memories. The controller felt mediocre. It wasn't super great, but it didn't do anything wrong. It was a modern version of the SNES controller if you ask me. The DreamCast Controller, I always mistaken it for a 'handheld' like the Gameboy. This was because of the little display in the middle. I had the feeling it could hurt me or I could cut myself somewhere around the edges. I think it looks like someone from Nintendo and/or Early Microsoft Xbox guy designed this thing, because it shares the weird controller appearances from Nintendo and the huge clunkyness from Xbox. 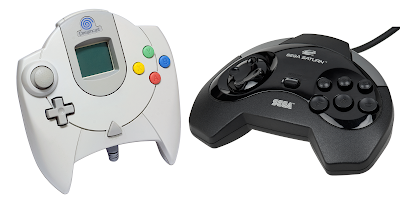 The Battle between PS2 and Microsoft Xbox. Logically like everyone I had a PS2 before the Xbox. Microsoft released the Xbox a year later than the PS2. That is why I never owned an Xbox. The PS2 controller wasn't all that different from the old PS1. I remember being happy I finally had the 'Analog sticks' I longed for. My hands were getting a little bigger, but I was still accustomed to the PlayStation type of controller. When I tried the Xbox controller, I was amazed what a massive piece of plastic this was. I actually liked it! Also their approach on the analog sticks was interesting since they used a more 'natural placement' when holding a controller in my opinion. The D-pad on the other hand was horrible. 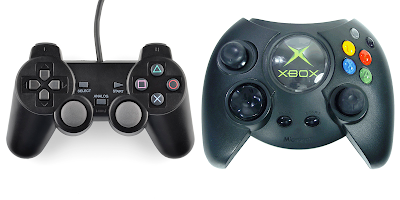 It took a while for these new consoles to release. I have always been advocate about the PlayStation, but since the PS3 took a while, I visited a friend who already bought the Xbox360. I got so hyped, that before buying the console I already purchased a game for the 360. Shortly after I bought the 360 itself as well. I really adore the controller they have designed. I think I have played most of my games with the 360 controller. Even on the PC I sometimes use the 360 controller. When the PS3 came out, I compared the controller to it's predecessor. Nothing really changed compared to the old PS2 controller. Since my hands were grown I was more drawn to the Xbox360 one because it was larger. The thing I loved most are the triggers on the back of the 360 controller. They curved outwards. It kept my fingers in place. If I played on the PS3 my fingers would usually slip off the L2 & R2 buttons on the back. Because of all this technique inside, these controllers became much heavier in comparison to the NES & SNES era.

The new generation of game consoles. They are not released yet. I have had the privilege to play on the 'Xbox One'. The controller seems a little smaller, and lighter. I like it. The analog sticks have these 'dimples' on top of them, it seems these dimples diameter is smaller than the one on the Xbox360 controller. I was more likely to slip off these sticks than before. Maybe I just need to get used to this. I have not played with the PS4 controller yet. By the looks of it, they finally fixed those triggers, by using outward curves. He seems wider and longer. It doesn't really look like the old one anymore, and they had to come up with a new design in my opinion. I think it will be a hard decision on which I like most this time!

Because of the open-source platform Android , new contenders came around the corner on the console market. I have recently aquired an OUYA console. I have to say that the controller has a lot in common with the Xbox360 one. At first I thought the hardware would be more 'flimsy', but OUYA definitely surprised me with this. Besides the awkward way to remove the batteries by removing the magnetic cover, I think the controller feels solid and is a mixture between an PS3 and Xbox360 in weight. The triggers are a little too plastic in my opinion, but hey, give them a break, it's their first release. I did not get my hands on a Gamestick 'yet'. I think it has a lot in common with the old NES controller, but prepared with buttons and features of the current generation. I am not sure if the gamestick would be my favorite because it looks kinda clunky. If it's a lightweight it would maybe bring back memories of my NES time!

When the old days of the NES & SNES were over, I never returned for their newer consoles. I gues I am not much of an Nintendo gamer anymore. Some friends had the Nintendo64. I remember playing the typical Mario games with them. I always found the N64 controller rather weird and had a 'cheap' appearance. You could feel the plastic and it didn't look high-tech to me. Was there anything in there? N64 and me never became friends.

The GameCube is a console that completely passed my attention. If I remember correctly I have played a total of 1-2 hours on this console. For some reason Nintendo kept changing their controllers heavily. Like if they were not on the right track themselves. Also this controller felt a bit cheap and too much plastic.

Because Nintendo took a completely new approach with the Wii, they got my attention again. I was however very disapointed. They changed their target audience and I did not feel 'involved' anymore. The Wii remote worked 'ok'. The Nunchuck add-on felt to me like a 'missing stick' they forgot to include, or wasn't fitting because the remote is used one-handed. Apparently the new audience loved the Wii, so I am happy for them. As a developer it's a large audience to develop for, so therefore I would say I still love Nintendo, they only lost me as a 'gamer'.

I did want to mention these controllers in this article, because a lot of gamers would disagree with me.

I do not know much about this controller yet. I have seen a short video. They have changed the analog sticks for touch control. It looks like they can control more game genres like "RTS, FPS and RPGs" with this design. I am very eager to test this game controller and I hope I am able to do so in the near future. The controller looks very comfortable and solid. I keep imagining this thing to be completely covered in 'rubber' or a 'latex' kind of fabric. 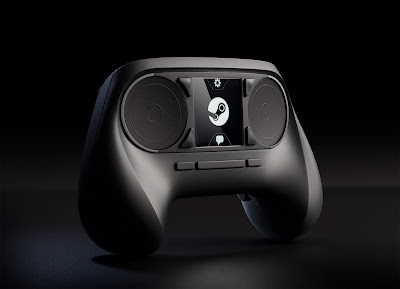 There are so many game controllers and so many opinions. I think everyone has it's favorite type. Because we play more and more games and take longer sessions, it's essential that these controllers are correctly and egronomicly build. There is an ongoing research to better controlsets and ways to communicate with our games. I get excited thinking about I am in the middle of this.

What type of controller has your preference?

Ask me a question anytime at: http://ask.fm/koendeetman
ConsoleProduction
Get daily news, dev blogs, and stories from Game Developer straight to your inbox
Subscribe