The Circle of Life: An Analysis of the Game Product Lifecycle

In his debut feature for Gamasutra, Lost Garden blogger and industry veteran Daniel Cook analyzes just how "...understanding the genre lifecycle trends can help you strategically position your game design for an improved shot at success", with many concrete examples.
Daniel Cook
Blogger
May 15, 2007

In 1994, encyclopedic game site MobyGames lists that 20 graphic adventure games were released. By 2002, the number of titles had plummeted to 3. The halcyon days of the graphic adventure genre are now long past and many of its descendants are relegated to a niche status in the modern gaming market.

This is all part of a much broader trend. Genres can be treated like product categories that evolve through a predictable series of life cycle stages. They rise in popularity and then decline. Along the way, both the needs of your users and the competitive dynamics of the market shift quite dramatically. Understanding the genre lifecycle trends can help you strategically position your game design for an improved shot at success.

A product category is a set of products that serve customer needs in a similar way. For example, most people have the need to clean their teeth. Two major product categories surrounding this need might include electric toothbrushes and manual toothbrushes. They both solve the same basic problem, but they do so using very different techniques and each present a unique and clearly differentiated value to the customer. 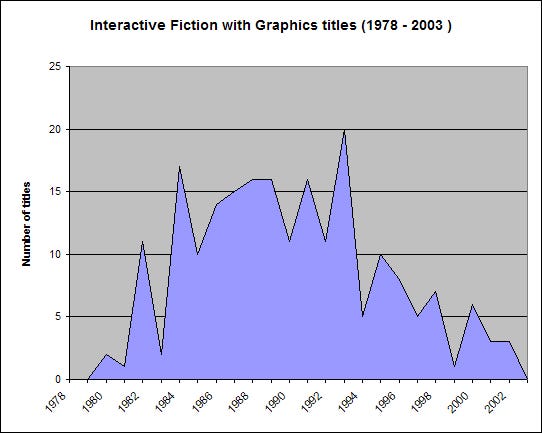 Product categories matter to your business.

Games happen to be products that serve a person’s need for entertainment. We may think of them as art, political statements, idle frivolities, etc, but commercial games are products first and foremost. As products, they have product categories just like any other product. It can be a bit of a leap to transition from thinking about toothbrushes to platform games, but the fundamentals hold true.

How do product categories map onto games?

Game genres are the most common way to splitting games into product categories. A game ‘genre’ typically refers to group of titles that share the same core game mechanics. Instead of ‘Romance’ and ‘Mystery’, we have ‘first-person shooters’ or ‘2D jumping and exploration’ titles. Day of the Tentacle and Monkey Island have radically different settings, but players understand that they both belong to the same game genre due to their similar play styles. 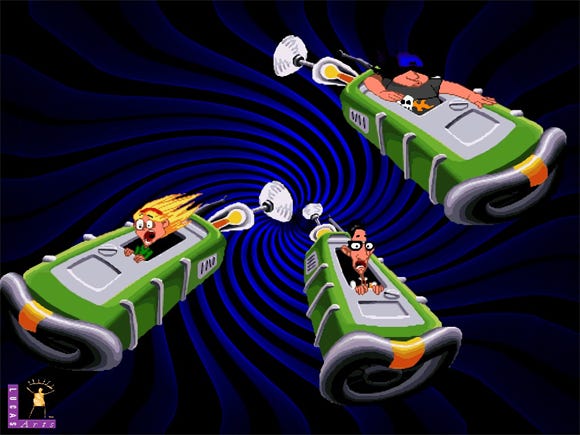 Like most product categories, genres are ultimately defined by the customers. A customer purchases a random game and discovers that it fits their entertainment needs nicely. Since most individual games have a relatively short burnout period, the player returns to the store seeking another similar game. Often, they’ll find that the sequel is not yet available so instead they pick up a similar title.

Occasionally, they’ll come across a game with the same brand, but with a different set of mechanics. Perhaps someone decided to make a Kings Quest 3D action game instead of an adventure game. The customers are often disappointed. For many game players, brand alone was not a meaningful measure of value.

I find the strong connection between game mechanics and product categories quite fascinating. A very profitable segment of customers believes, despite all our effort spent on innovation, branding, packaging and licenses, that similar game mechanics are the defining characteristic of gaming value.

Genres evolve over time as players discover, fall in love, grow bored and then move on to other forms of entertainment. The life cycle of a genre follows a pattern often found in other product categories throughout our capitalist landscape. 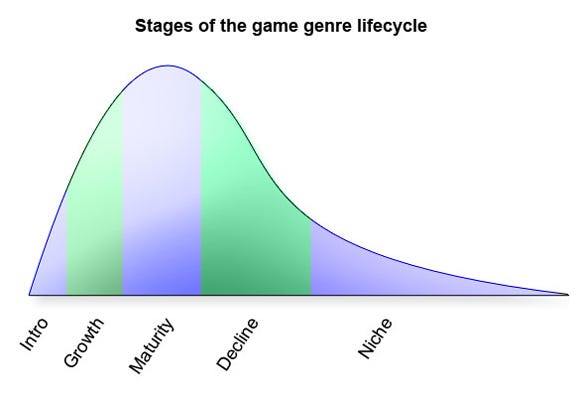 The genre life cycle is useful for garnering insight but is not foolproof: 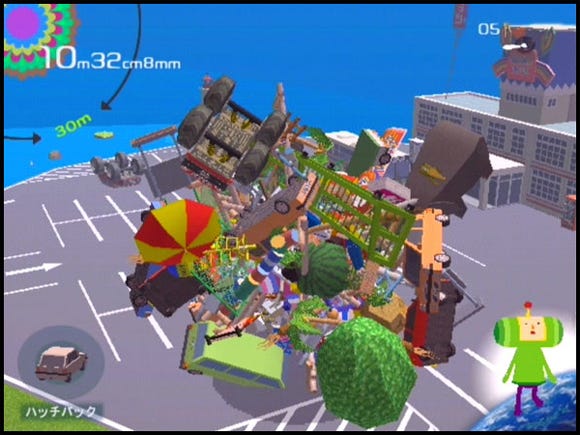 However, despite these edge cases, the model holds up remarkably well. Most genres including RTS, text adventures, graphical adventures, 2D platformers and others that can be identified cleanly in historical databases like MobyGames or various review sites follow the genre lifecycle pattern when you crunch the data. 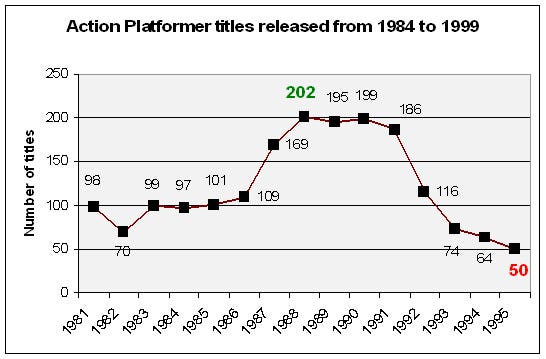 Customer demand rises and then declines over time. Some of this has to do with the general competition of new markets. However, the reliance on game mechanics as the primary source of value for the player also has strong ramifications. As players gain more experience with specific game mechanics, they go through a predictable sequence of engagement, pleasure and burnout.

This sequence plays out as well in the dynamics of broader market. Individual games, as collections of game mechanics, witness their players running through this sequence as well. Most players will tire of a single game given time. Genres, as collections of games that share similar game mechanics, also exhibit this sequence. Populations of players will tire of playing similar games given time. The micro-design level interaction between games and their players has a profound affect on the larger market for a game genre.

By understanding how burnout progresses, we can explain how player expectations evolve over the various stages of the genre lifecycle. In order to deliver value, you need to understand what your players want and what they can handle. This model helps us target the right level of game mechanics at the most dominant segment of the market. Let’s look at the three distinct stages of mastery that are evident throughout the lifecycle. 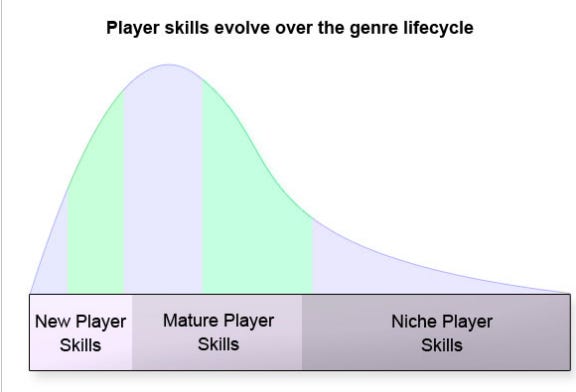 When first encountering a new game, players find everything in it surprising. Players lack the most basic skills of playing the game so the opportunities for both learning and misfires are high. 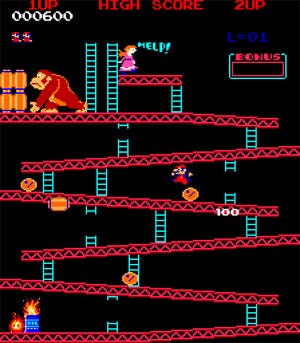 In Donkey Kong, for example, the act of jumping over barrels for the first time was a huge learning experience for most players. Though modern players might consider this game mechanic not much more than a ‘mini-game’, new players found the freshness of the mastery task was more than enough to justify a purchase. When a genre is new, it is common to witness relatively ‘shallow’ game mechanics achieving surprising successes. Even today, you can see this pattern repeat with titles like Wii Sports. For new players, the product’s value resides in their initial mastery of the new experience, not in the honing of old skills.

As the game mechanics standardizes, a core audience of experienced players coalesces around the genre. They’ve mastered the basics and demand that new games both honor their existing skills and offer them greater challenges to master. These passionate fans, called genre addicts, are very willing to pay for more titles that allow them to extend their existing skill set. They are also willing to promote the game. Informal networks of ‘expert’ players drive impressive sales through word of mouth. Many happily teach new players and bring them up to speed through both encouragement and social pressure.

The emergence of a cash rich, well defined, homogeneous audience is highly attractive to many developers in our failure-prone business. It is not going too far to suggest that the majority of the professional game developer industry is constructed to serve maturity stage audiences. Large teams are assembled with the goal of creating products that have a shot at becoming first or second in an established genre. In light of this business strategy, it makes sense that companies tend to value craftsmen designers and developers who are passionate about building incremental improvements within proven genres.

Unfortunately for many, genre addicts, and their practice of clustering around a small number of genre kings, create a winner-take-all environment. Second tier clones are to be expected, as are also their inevitable corpses.

During the niche stage, the audience begins to fragment. Not surprisingly, people have difficulty maintaining nonessential skills at elite levels for long periods of time. Burnout erodes communities from within and many players lose both their skills and their urge to keep buying new games from the genre. The virtuous circle that produced the homogeneous market of gamers falters. Their addiction fades.

This leads to an interesting mix of players during the niche stage that make it particularly challenging to serve. There are three fragmented categories that emerge: 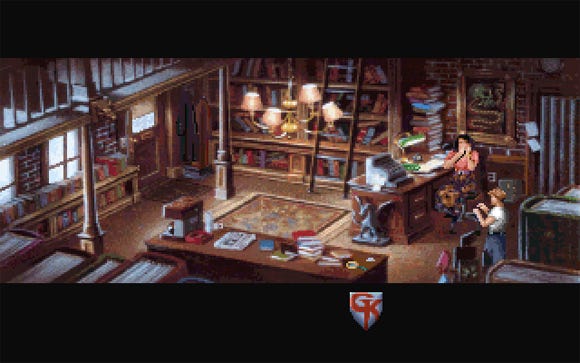 At each stage, we’ve seen how both the market dynamics change and the typical player skills change. Ultimately every game developer must ask “Who is my game’s audience, what are their needs, and how does my game compete?” The genre life cycle is a quick and dirty model that provides some rather useful insights into these questions.

It is perhaps mildly flippant to note that there is a big capitalist world out there full of thousands of industries that have been releasing products for generations longer than the game industry. The ‘genre life cycle’ is merely the well established product life cycle concept applied to the game industry. This is business 101 for many companies, yet I find that it is a surprisingly fresh concept for many game developers. Traditionally, we know that some product categories are taking the industry by storm, but there is rarely much discussion about why this situation might be the case.

Because we have poor predictive models of how our product categories evolve, there is a tendency to make decisions based off what is happening at the beginning of product planning. Yet, when the game is released 2 or 3 years down the road, the market has shifted, customer expectations are different and the livelihood of many a talented and amazingly hard working developer is harmed.

It is currently common for companies to spot an emerging genre during the expansion stage only to release several years later during the maturity stage. Titles that might have become staples of the genre are instead relegated to B-grade status when they come face to face with entrenched genre kings.

Heaven forbid that you started developing the greatest genre king adventure game in the mid 90’s. Your large development budget, mature gameplay, and expensive branding campaign would have met a remarkably anemic reception upon release a couple years later. The magazines might proclaim that your title to be one of the best of all time, but the customers just weren’t there any longer.

I’m struck by this quote from Bill Roper when he was asked about the canceled WarCraft Adventures from 1998, deep in the decline stage of the adventure genre: 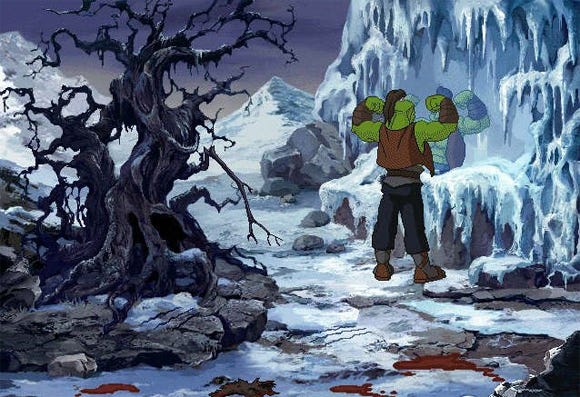 It is worth our time to borrow a few analytic tools such as the product life cycle and apply them to our wonderfully vibrant industry. By doing so, we gain a conceptual framework that lets us expand our decision making beyond what is currently ‘hot or not’ and start taking note of previously unseen opportunities and pitfalls.

MobyGames. An archive of older games and their release dates.

The history of CRPGs. This historical article gives a blow-by-blow account of how the computer role playing game genre evolved and fragmented over time. Note the numerous mentions of fan betrayal when the developers change the core mechanics of their titles. Over time, the ‘traditional’ CRPG genre fall into the niche stage and is supplanted by the 2D action RPG (of which Diablo was the genre king) and the 3D action RPG (where Bethesda’s various titles were genre kings).