Rather than play the numerous mainstream titles released this year, Robert has been glued to several low-profile titles on his 3DS. Why is that?
Robert Bevill
Blogger
March 11, 2013

So far, 2013 has been like treading a minefield when it comes to AAA titles. Dead Space 3 angered gamers with its forced co-op and microtransactions, Aliens: Colonial Marines showed us what happens when a project gets shifted from studio to studio, and the SimCity fans are unable to play the game they paid for. Even the well-received AAA titles can't escape controversy; DmC raised questions on whether a reboot was necessary instead of a new IP, and the story in the new Tomb Raider seems at odds with its gameplay. The upcoming weeks might spell trouble as well - The Walking Dead: Survival Instinct seems like it's trying to capitalize on the success on TellTale's Walking Dead adventure game, and the numerous delays of Bioshock Infinite can't help but breed skepticism.

However,  for the past three months I've been gaming like crazy, but rather than being drawn in with beautiful cutscenes and action-oriented gameplay, I've been glued to my 3DS. I was sucked into the game in Zero Escape: Virtue's Last Reward, risking the lives of my soldiers in Fire Emblem: Awakening, and finally, I've been drawing my way through the mazes in Etrian Odyssey IV: Legends of the Titan. For years, publishers have been doing everything they could to make their games more accessible without alienating current fans, but Fire Emblem and Etrian Odyssey have almost perfected the art. Here are a few rules to take away from these two games.

1. Give the player options

The latest installments in Fire Emblem and Etrian Odyssey both feature a "casual" mode for players who are inexperienced or dislike the possibility of losing progress. The two series both have a reputation for being extremely difficult, which is what drew hardcore players to them in the first place. However, by removing the penalty for death, both games have found new fans who want to experience the story and explore the world without worrying about their every decision. A certain level of skill is still needed to progress, but a simple option to change game mechanics helped draw in a whole new audience without alienating the older fans. Of course, this approach won't work for all games - part of what made Spec Ops: The Line engaging for me was thanks to the monotany and frustration of the gameplay, helping me empathize with the protagonist.

Before release, EA said that Dead Space 3 would have to sell more than 5 million copies to be considered a success. That's a ridiculous number, and it's no wonder than DS3 didn't even come close to making its money back. Similarly, Aliens: Colonial Marines had been in development for more than half a decade, and Sega chose to keep putting money into the project rather than quietly cancel it despite the numerous problems it faced. However, Fire Emblem continues to be hard to find weeks after release, and I had to try a few different retailers to find a copy of Virtue's Last Reward. These smaller games won audiences over with ease, and the word of mouth helps them bring in new fans who become frustrated with mainstream offerings. 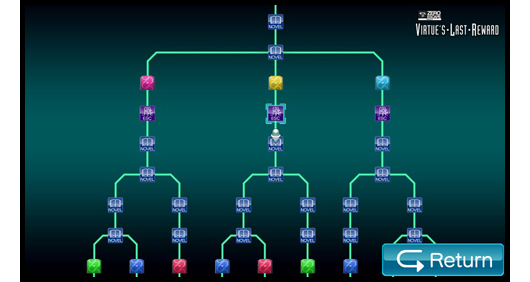 Multiplayer is a huge part of the gaming industry right now, whether it's competitive like Call of Duty, or cooperative like Borderlands. Dead Space 3, Aliens, and SimCity all allow the player to play on their own, but it's clear that the games were designed with multiplayer in mind. A person playing DS3 by himself will miss several story-critical cutscenes, and in SimCity you need the resources from other players in order for your own city to succeed. More solitary gamers wind up feeling marginalized, and find themselves unable to enjoy the game's content unless they can get a friend to play with them, or risk allying with strangers who might hurt their own experience.

However, one thing that makes games different than movies is that players will not always have the same experience. The branching paths in Virtue's Last Reward mean that two players will have vastly different expectations, leading to discussions far different than reading a book or watching a movie. Similarly, in Fire Emblem and Etrian Odyssey, the player has full control over what characters to use and how they develop. Even though players will still tread the same mazes and face the same enemies, their path through the game will not be the same as their friend's. In this sense, the players are telling their own stories rather than being forced to be a part of someone else's.

4. Games don't have to be about the action

Now, don't get me wrong here - I love a good shooter. Despite my skepticism, I'm still looking forward to Bioshock Infinite and The Last of Us, and I don't want this to be a rant about people liking different things than me. However, the action-heavy style of play has hurt several major projects. The tense atmosphere of the two Dead Space games is nearly nonexistant in 3, leaving horror fans wishing they had spent their money elsewhere. The new Tomb Raider intends to tell the story of how Lara Croft became the woman we know, but her transformation from survivor to killer is handled awkward due to the action-heavy nature of the game. I feel like I'm beating a dead horse here, but look at the 3DS games I've been talking about. One is a visual novel, one is a turn-based strategy game, and the other is a dungeon crawler. All three games have found a fanbase by doing something other than pure action. They've filled a niche that mainstream titles just won't offer (then again, the success of XCOM and The Walking Dead last year may have an influence on the games we see in the coming years).

EA needs to be careful in the future, especially considering it's angered fans with its latest releases. Publishers are starting to realize that by playing it safe, they might wind up shooting themselves in the foot. Not every game needs to be a million seller to be a success, and what works well for one game would be a burden on another. This year, I've passed by several high-profile titles while my 3DS sits in my pocket to be played at a moment's notice. The fall of THQ may be a warning of things to come if other publishers try to follow in its footsteps.