We talk to the developers of Dead Cells, Caveblazers, and OlliOlli about the challenges, the appeal, and the difficulty of implementing a daily run in their games.
Simon Carless
Blogger
October 23, 2017

One of the things the resurgence of roguelike games brought with it was the idea that, to get the most out of your game, you don’t need to dedicate a huge chunk of time to it.

Every run of Spelunky has the potential to go all the way, just as every run of Binding of Isaac might end just a couple of rooms in. You can sit down and, forgiving incredible luck or a hot streak, expect to be finished with your run in a fairly small amount of time. You’re presented with a condensed, intense shot of a game that could satisfy you in the same way a protracted session used to.

Which makes it unsurprising that it’s the genre that gave birth to what amounts to almost a subgenre within roguelikes: the daily run. Along with revitalizing the genre, Spelunky also introduced the idea of a "daily challenge."

That is, a shared seed across all copies of the game (although separate seeds for Steam and PS4) that everyone gets a shot at, before it rolls over to a new seed 24 hours later. Throw in a leaderboard, and you can achieve short-lived fame knowing that the conditions were no more favorable or adverse for you than anyone else.

Since then, the mode has popped up in dozens of games, always with a bit of a twist on the formula, to the point where it’s made dalliances out of the roguelike genre, or given birth to wholly new ways of playing the game within it.

It’s become difficult to establish whether developers are operating on a shared understanding of what makes a daily run good, or even whether there are are common rules that dictate exactly what a daily run is. 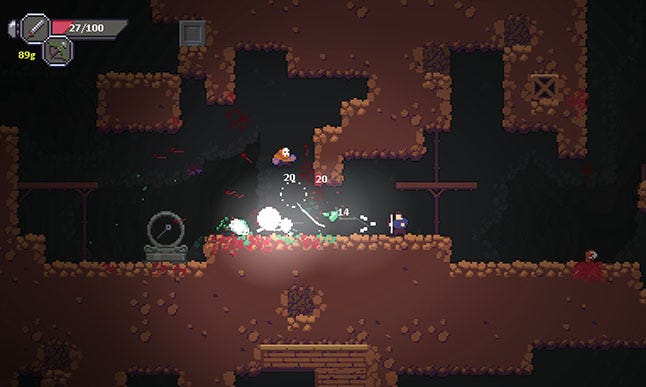 “The only two principles are that there is a shared seed, and that it changes every day,” Will Lewis, designer, programmer, and artist on Caveblazers, made by Rupeck Games, tells me.

Their daily run isn’t just a shared seed but also a shared set of modifiers, altering the standard Caveblazers game into something juiced up with a series of blessings and curses, not to mention unique enemy spawn and behavior modifiers. It elevates the pace of the base game into something bordering on chaos, depending on the chosen mutations.

"The only two principles are that there is a shared seed, and that it changes every day."

Beyond that shared seed and 24-hour cycle, it doesn’t seem like there’s much set in stone. “Some games, like Caveblazers, limit players to only being able to play the Daily Run once per day,” Lewis continues. “Which I think works really well as a way of making players "value" their lives, but it's not something that's required for daily runs.”

Indeed, the way that Dead Cells approaches the daily run is pretty divergent from the norm, allowing players to try the daily as many times as they like, and just record their top score for the day.

“We understand the value of a one shot daily run,” says Motion-Twin's Sébastien Bénard, lead designer on Dead Cells. “It drastically raises the stakes as well as removing any advantage that people with a lot of time on their hands have in being able to do it over and over until they’ve got it down pat.’

“However, it’s also easily abusable, since watching a video and learning the dungeon by heart before playing will give you a considerable and unfair edge on the other players," he says.

“Allowing people unlimited attempts at the daily opens up the mode to those who just want to better themselves. It adds something of a 'puzzle' element to the game as you have to work out which path through the level is best for you. Overall it’s less punishing and more welcoming for the whole community rather than just focusing on a specific minority of hardcore players.” 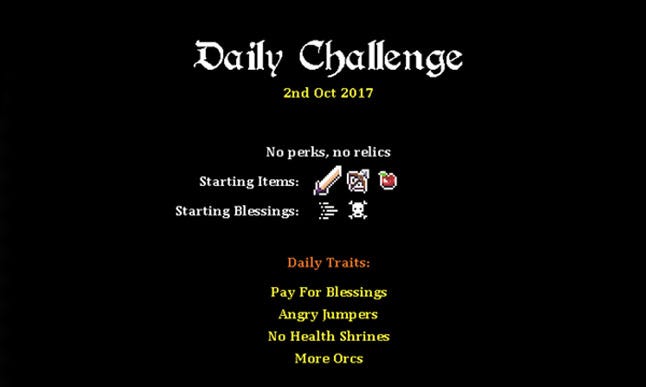 That isn’t the only way that Dead Cells’ daily run differs from the norm. It also adds a ‘time attack’ element, where you’re tasked with killing a boss before the timer runs down, but able to find extra time through exploring and killing enemies.

Not only that, but it’s scored using a new system of points and multipliers, which aren’t found in the base game. Where Caveblazers layers mutations onto the base game for the Daily Run, Dead Cells straight up changes it.

"Practice meant nothing; it was all down to doing it live on that one attempt."

Talking to whoever it is, they keep bringing up the idea of the daily run as a puzzle for the player to solve, where there’s essentially a ‘perfect line’ through the generated level that will produce the best score, and that’s what they expect players to find with their unlimited attempts at the daily run.

It plays into the idea that, as a community, daily runs are seen as something with a sort of ‘solution’ that ends up being the top spot on the leaderboard for the day.

This is something that I also hear when I talk to John Ribbins of Roll7, makers of OlliOlli and OlliOlli2, the sidescrolling skateboarding games. Despite having hand-designed levels, they still included a daily mode, where the game would select a random section from a level and have players compete to see who can achieve the highest score.

Although not quite as generous as Dead Cells, offering infinite attempts and keeping the highest score, they were close: you instead get a practice mode with infinite attempts, before committing to a single attempt that is recorded.

“OlliOlli is a game about failure and improvement, it's a game that also requires players to be consistent," Ribbins says. “You could practice as much as you wanted, figuring out your highest scoring line, but as soon as you hit the 'do it for real' button, it was on. The practices meant nothing, it was all down to doing it live on that one attempt. This fitted in nicely with the idea of being consistent.” 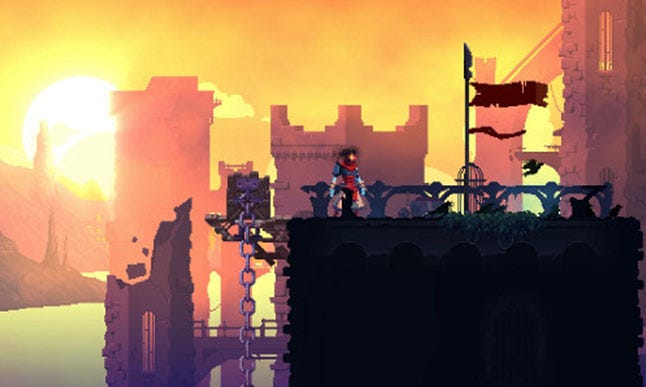 What’s interesting here is that OlliOlli and its sequel aren’t procedurally generated games, so they weren’t drawing from a shared seed for these daily runs; instead they were sections of pre-made levels. This had an interesting side effect, that Ribbins lays out for me: “If you'd only reached level 2, 'Daily Grind' was a way to see stages from levels 3-5 before you got there in the main game. They were a way to give you a little taste of what was coming up and hopefully encourage you to play further.”

"If you'd only reached level 2, Daily grind was a way to see stages from levels 3-5 before you got there in the main game. They were a way to give you a little taste of what was coming up and hopefully encourage you to play further."

Applying this thought process to the way Caveblazers generates its daily mode produces a similar idea; the kind of intensity and chaos that you find there is usually reserved for the later levels, meaning that you could easily see the daily mode as a sort of ‘experience tourism’ there, too.

All of which gives rise to something else that Ribbins brings up. “If you wanted, Daily Grind could be the whole game for you. You could sit down and spend two hours each day perfecting your line on that day's level, then when you were really confident that you had it down, commit to it.”

Part of the major appeal for developers in a daily run is the way that it increases the longevity of your game by giving players a reason to come back and play, day in and day out.

But I see no reason it can’t become the reason players come back, especially when one of the appeals of roguelikes and similar games is the brevity found in them in the first place. And given what Ribbins, Lewis and Bénard tell me about engagement, it sounds like it is that to a lot of players.

“We're still getting a fairly large number of players each day, and the fall off in numbers each day is very small, so I think it's doing well!” Lewis from Rupeck says. Bénard at Motion-Twin has a similarly enthusiastic tone: “So far we’re pretty happy with around 7,000 runs per day.” 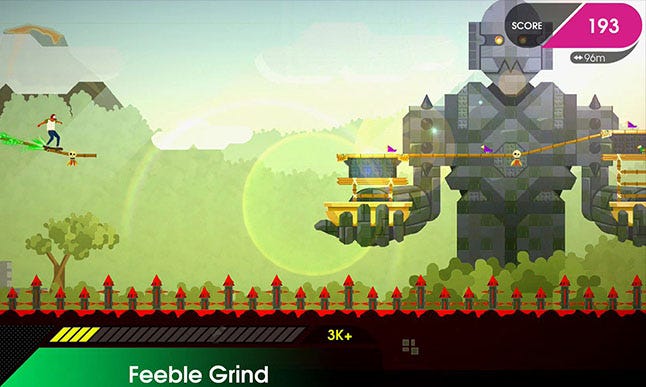 None of which is going to be particularly convincing unless the difficulty to implement is justified. For Rupeck Games, the answer was simple. “It was actually one of the easiest 'big' features in the game to implement, so it was definitely worth our time. The whole thing was fully functional after a single weekend, and now we're at the stage where we can easily keep adding 'Daily Traits' in future updates to keep it fresh and varied.”

For Ribbins, it wasn’t quite as easy, although not due to the mode itself. “We didn't roll our own servers and were relying on Sony's leaderboard systems which (at the time) weren't set up for daily challenges. I remember being in the studio at about 1 a.m. one night with Nikos Asfis (our senior programmer at the time), when we worked out a way that we could do a kind of hacky setup that involved having seven different leaderboards (one for each day of the week) that would reset after each day."

"Despite it being a bit of a sketchy implementation, I think we actually ended up using the same system in OlliOlli2, if it ain't broke don't fix it!”