Back in 2001, Nintendo and Capcom collaborated for a pair of Zelda games called The Legend of Zelda: Oracle of Seasons and The Legend of Zelda: Oracle of Ages. They were released on the same day, but unlike their cousins Pokemon Red and Pokemon Blue, they were two significantly different games that together formed one extremely large Zelda adventure.

Today, Game Makers’ Toolkit creator Mark Brown is taking a close look at these games in his series Boss Keys in order to build a level design tool that can be applied to the entire Zelda series. It’s worth a watch any aspiring level designer (or even one with a few games under their belt) because it plainly breaks down how the complicated and layered dungeons of the Zelda series can be viewed through a simple analysis of keys, doors, and special items.

Why are the Oracle games so crucial to Brown’s thesis? Well since they were released after the Nintendo 64 Zelda games, they were able to draw on some of the biggest design lessons from older Zelda games like Ocarina of Time and Link’s Awakening, lessons that would later shape games like Wind Waker and Twilight Princess.

Brown points out that some of the Oracle dungeons even manage to surpass those in the much-lauded Ocarina of Time, since they set up a clear and functional pattern of exploration that can be subverted, built on, and explored fully across 16 different iterations.

If you want a preview of Brown’s analysis, take a look at the following map, which is drawn from the Oracle of Ages dungeon Jabbu Jabbu’s Belly. It eschews the physical room layout for a simpler breakdown of the order of how the player encounters different obstacles within the dungeon, and in this case, what level the water needs to be at in order for the player to access different keys and objects. 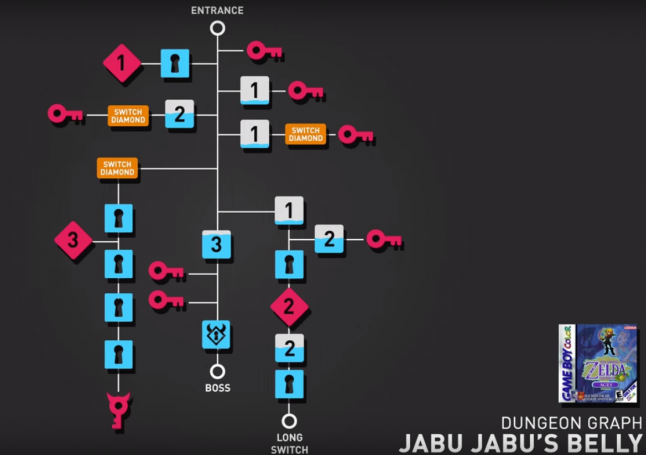 Brown explains that because Jabu Jabu’s Belly is laid out as seen above, it’s far easier for the player to navigate than Ocarina of Time’s infamous Water Temple, which used similar puzzle mechanics (Though as he goes on to point out, the Water Temple benefits from its 3D environment because it lets the player visually understand the concept of floating platforms.)

And for regular readers, if Brown’s analysis about keys and doors sounds a little familiar, that’s because it's really similar to how Bill Gardner explained some of his level design tricks from the original BioShock.