Talking Tom Hero Dash developer Outfit7 Limited digs into the question of "what's next?" for the endless runner genre and offers advice to developers working in a similar space.
Alissa McAloon
Editor-in-Chief
May 15, 2019

Let’s talk endless runners. Promising instant action and endless surprises, this is a genre designed for the modern gamer who is able to play anywhere and everywhere, for as little as 30 seconds to as long as an hour. So, what sets a globally chart-topping endless runner apart from the rest? How do we continue to innovate such a tried and true genre? And, as mobile devices continue to advance, how can developers rise to the challenge of advancing the mobile games played on them?

By following the five tips below, we hope to offer players a new caliber of endless runner game. Want to see it for yourself? Talking Tom Hero Dash launches on June 6. Pre-register for the game here.

Outfit7 Limited has released more than 20 chart-topping mobile games. During that time, we’ve not only become a leading publisher and innovator of Tamagotchi-style mobile games, but also a key player in endless runner mechanics. We’ve listened and learned a lot from the fans of our endless runner games, and with each new launch, we’ve aimed to bring a new and exciting element to their mobile screens, be it a captivating storyline, heightened customization, better quality artwork and mechanics, or even, a superhero twist.

Right now, Outfit7 is on the brink of launching its most ambitious endless runner game yet, Talking Tom Hero Dash. For the first time ever, our fans will have the opportunity to jump, fly, and run across five different worlds, all while battling bad guys, collecting loot, unlocking great surprises, participating in special in-game events...and living out their superhero fantasies. In creating the game, we took a long, hard look at all of our previous runners and asked: “What’s next? How can we elevate the endless runner experience?” Here’s our answer.

For an endless runner to stand out, marketability is essential. It is important to remember that the mobile gaming industry is a global one, so choosing characters or concepts that can be appreciated across multiple cultures and demographics is crucial. At Outfit7, we are fortunate to have built an amazing and loyal fanbase over the years. However, with an established fanbase and already successful franchise also comes the challenge to bring something fresh and exciting to each new game launch. 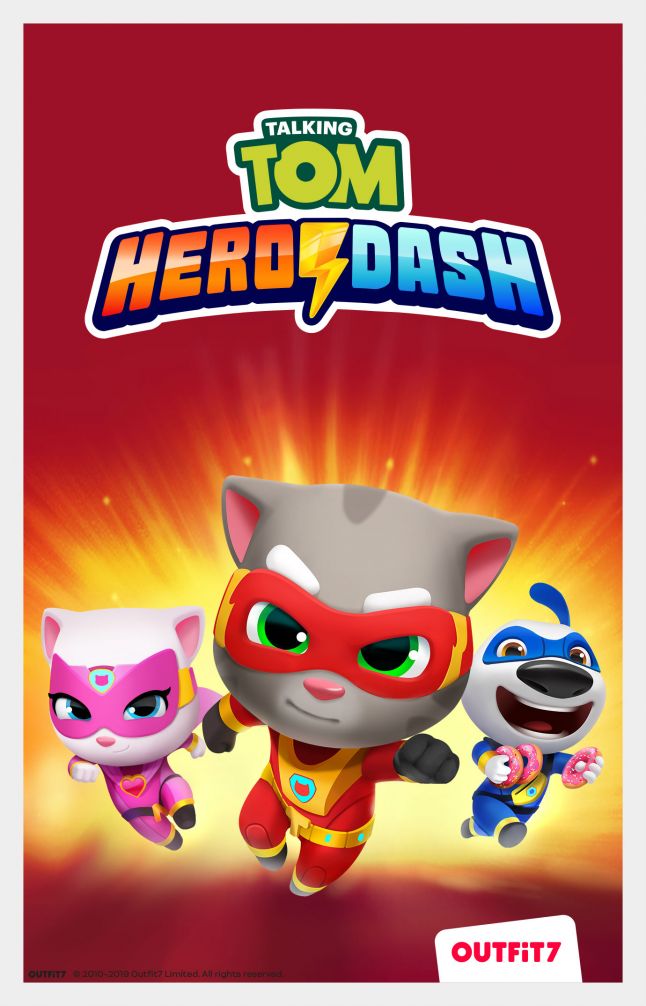 First and foremost, it is important to listen to what players like and what they want, as well as what excites and entertains them right now. With Talking Tom Hero Dash, we were able to place two highly marketable concepts into one endless runner game. The first concept is, of course, the "Talking Tom and Friends" characters. Talking Tom, Talking Angela, Talking Hank, Talking Ben, and Talking Ginger have a proven track record for success around the world. Mobile games featuring these characters have accrued nearly 10 billion downloads globally. Video content featuring them has been viewed over 28 billion times in 190 countries around the world. They even have their own theme parks. So, how can we raise the bar on their marketability and give our players something new and exciting in the process? For us, this meant turning our beloved characters into superheroes.

Whether you are a comic book fan or not, you have likely come under the spell of superhero fandom at one point or another. We are drawn to superheroes because they provide us with a narrative for coping with adversity and discovering our strengths and using them for good purpose. This is a storyline that translates across multiple cultures and languages. In forming a superhero team composed of the Talking Tom and Friends cast, we’ve given our fans precisely what they want and, in turn, created a game that is able to be marketed to players across multiple cultures.

From the artwork and the mechanics, to the content, we knew quality would be paramount if we wanted to elevate the gaming experience for our users. We spent countless hours brainstorming, sketching, and testing Talking Tom Hero Dash to ensure each minute detail, from the look of the dumpsters to the movement mechanics, met the highest standards. There was a vast team of artists, developers, engineers, gamers, writers, and more behind Talking Tom Hero Dash, ensuring that it was the very best it could be.

When it comes to quality, our secret weapon is our incredible game development team. Each member of the team strives for quality from the very beginning. To add to this and make sure our games are the best they can be, we also have company-wide testing, which offers us a tremendous feedback train. Most of Outfit7’s employees are gamers, so they have this great overarching view and perspective on what resonates best in a mobile game. After receiving this feedback, we work together as a team assessing it and deciding what aspects to implement. 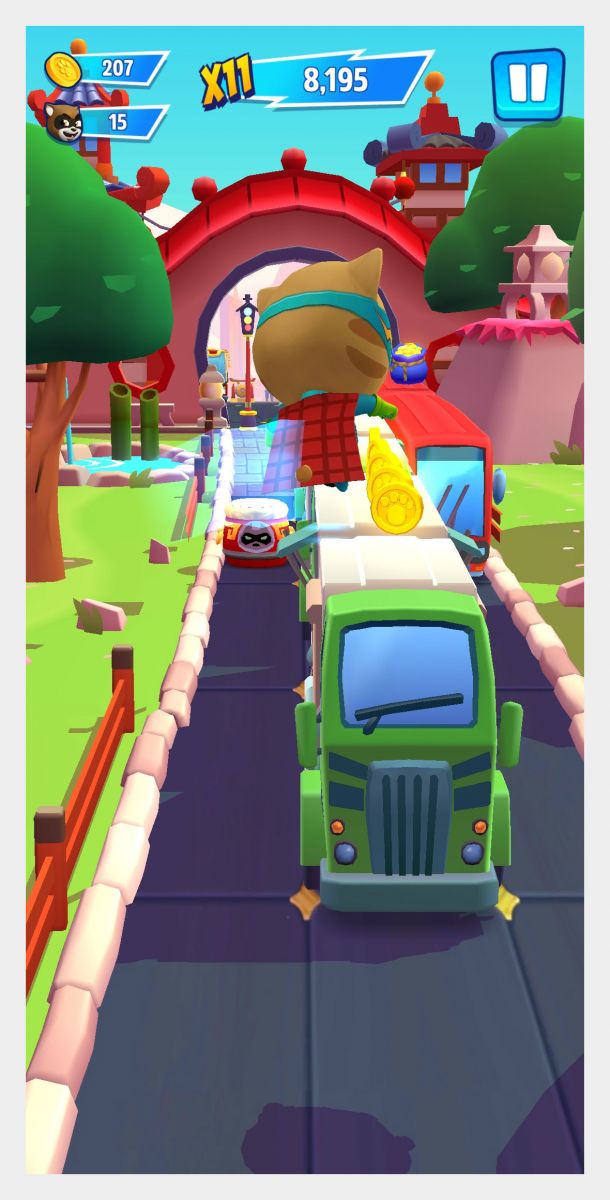 In the early stages of development for Talking Tom Hero Dash, we were really driven by this vision of making gamers feel like heroes. To achieve this goal, the game went through many iterations. We toyed with everything from a sci-fi to a fantasy concept until we finally landed on superheroes. We also tried out tons of mechanics. At one point the game even took on a pinball vibe, where Talking Tom was battling raccoons from within a spherical ball. At another time, we tested special buttons that would allow players to activate superpowers, but ultimately decided this was straying too far from the runner genre. With each iteration, we were able to peel back another layer and pull out what was working best and what could be improved, until the game ultimately evolved into what it is now.

The most successful games in the world make players feel something on an emotional level. When you present players with a storyline that allows them to deeply connect with the game, they become much more invested in playing it. With Talking Tom Hero Dash, we knew we wanted our players to feel something extraordinary. We wanted them to feel like superheroes! After trying several different mechanics, we felt the runner mechanic best captured the excitement, fun, and heroics we were after. However, if we wanted to go “superhero” big, we also knew we’d need to create something much grander than the typical endless runner narrative of running to collect points. That’s why we set out to create a runner game with a much more involved storyline, one where YOU are the hero, YOU are rescuing friends, YOU are saving the world, and YOU are defeating bad guys. We wanted to bring that joy and excitement to players all over the world. While still maintaining the straightforward integrity of the endless runner concept, Talking Tom Hero Dash pushes the boundaries in terms of its narrative. In doing this, we’ve endeavored to enrich the gameplay for our players. It’s not just an endless runner; it’s an RPG as well.

We began by developing the overarching plot of the game: Talking Tom and his friends are now superheroes under attack by a pack of villainous raccoons. We then upped the stakes: the raccoons are destroying various cities and have kidnapped Tom’s friends. This creates a scenario where the goal is much larger and much more compelling than earning a high score. In creating a more complex narrative, we’ve opened the door for more engaging interactions and emotional connections throughout the game. Now, players can activate superpowers, battle bad guys and bosses, rescue friends, unlock the ability to play as other characters, and so much more.

4. Keep Them Coming Back for More

Arguably one of the most important factors when gauging the success of an endless runner is how often gamers return to play the game throughout the day. With Talking Tom Hero Dash, we knew a large part of what would keep players coming back is the great narrative. However, a captivating storyline is not enough on its own. Knowing that endless runners are often played for a very short time, players don’t always have time to digest a full narrative. That is why instant and constant excitement is key. Behind the scenes, our team is highly diligent in ensuring the fun never dulls. 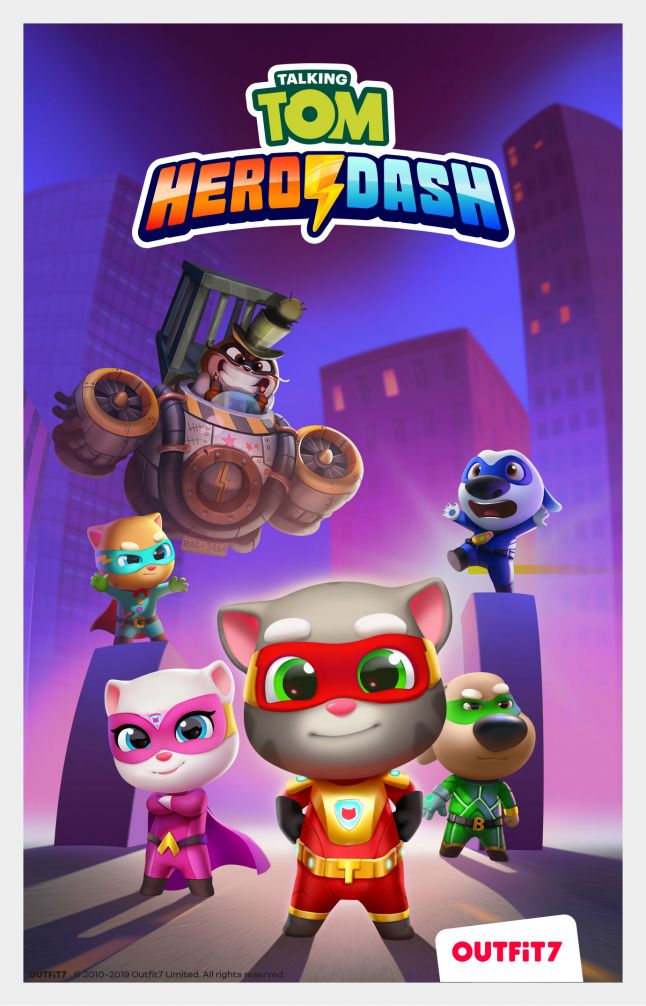 From the start, an endless runner game needs to be action-packed and full of energy. And while they should be easy to enjoy by both the novice and seasoned player alike, the endless runner game also needs to be challenging to master and brimming with surprises. One way we achieved this is by allowing gamers the ability to play as new superhero friends as they progress (and also wield new superpowers). The excitement of seeing which character will be unlocked next and what sort of powers they will have makes for a highly captivating game that we hope gamers will want to revisit over and over again.

5. Make an Impact… Beyond the Game

Perhaps one of the most impactful ways we can elevate the endless runner (and every mobile gaming) experience is by creating an opportunity for fans to engage with the game outside of the game itself. For Outfit7, we are all about creating 360-degree fan experiences — in many cases, that has meant blurring the lines between the gaming world and the real world, and establishing greater emotional connections between our characters and fans.

Knowing that we were introducing these completely new superhero versions of these well-known characters, we wanted to create a space where fans could embark on an adventure with these super friends beyond the mobile game. For us, this meant developing an entire animated series called “Talking Tom Heroes” that would give fans a more robust experience and greater connection with the characters. Additionally, we are offering the opportunity for players to snag a free Titanium Force outfit inspired by the game, should we reach our goal of 3 million pre-registered users by the game’s launch in June. This is an example of how a great endless runner need not stop at the game itself. By going above and beyond, we heighten the fan experience overall.

Outfit7 Limited is one of the world’s fastest-growing multinational family entertainment companies. The company is best known for its flagship franchise, “Talking Tom and Friends”, which became an overnight global sensation when it launched in 2010. In the years since, Outfit7 has expanded its portfolio to include a suite of award-winning games, a 3D CGI animated series, digital video content, chart-topping music videos, and a licensing program in order to meet the amazing demand of its fans. In fact, Outfit7’s games have now been downloaded over 9 billion times and up to 350 million fans play with them every month. It’s game on, world. For more information, please visit www.outfit7.com.