Exploring the microscopic cosmos beneath our feet in Secrets of Soil

"With every scene, I wanted to build up this world, with more life emerging the deeper the player dives."
Joel Couture
Contributor
September 24, 2021

The earth beneath your feet might not seem exciting or pretty, but Secrets of Soil aims to change that. Taking players of a striking, beautiful journey through soil, it creates visual representations of the interconnected living beings and microorganisms that make up the world under us.

Game Developer spoke with Henry Driver, the game’s developer, to learn more about the climate change concerns that prompted them to create this experience, what thoughts went into creating sumptuous visuals to represent these many organisms, and how the game looks to make the science of soil connect with its players.

Game Developer: Secrets of Soil explores the world of, well, soil. What inspired you to make a game about this?

Driver: Coming from a farming family, I have already witnessed the effects of climate change, as they reduce our harvests. My family have been updating their farming practices to become carbon negative, as well as more resilient and sustainable. This way of farming depends on working with the life buried within the soil, and using that to provide nutrients and protection to crops.

But what lives in the soil? What does it do? When I came to understand that there is a whole world buried beneath our feet, full of microorganisms, I began exploring the possibility of visualising this as a game.

What thoughts went into creating a game about the role of soil? In exploring soil and what it does?

I wanted the game to hopefully be enjoyed by a range of audiences and ages, but achieving that is incredibly difficult. Initially, I planned to have a responsive narrative, where the level of information varied depending on the audience’s interaction, but unfortunately, l had to shelve this due to time constraints. When designing and writing the game, it was difficult to decide the level of information to include. I wanted to connect diverse audiences to this ecosystem but not bog them down with too much detail. I didn't want the game to feel like a stodgy science lesson. I think some scenes do that better then others.

The other tricky part was visualising the world. Some parts I could rely heavily on scientific imagery to inspire me, while others required significant artistic license or imagination. For example, how do you visualise plants and bacteria speaking to each other? I undertook quite a considerable amount of playful R&D and experimental production to build up a toolbox of visual language that I could draw upon. Sometimes my R&D for one scene ended up becoming part of another. That playful creation and

pushing of systems to encourage surprises is integral to my production methods. I strongly believe in there being a dialogue between myself and the software, as well as all the integral parts which inhabit that, such as shaders, models, effects, etc. 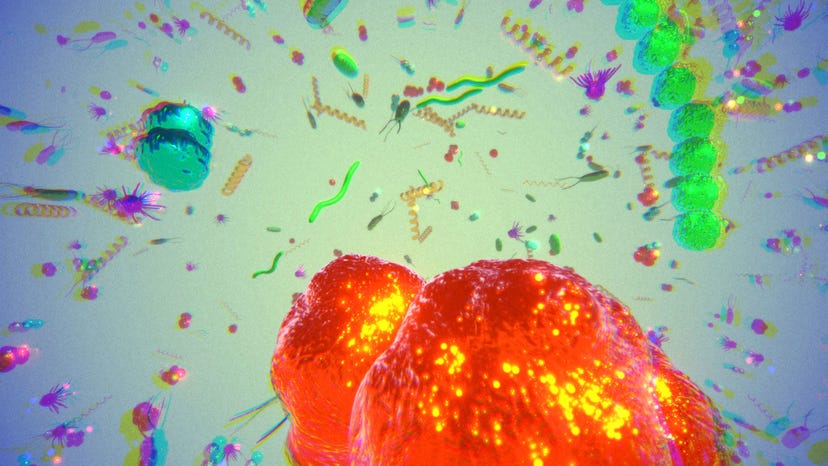 What drew you to make this an experience in exploration? Why do you feel that suited this game about soil?

Buried below our feet is a complete world, brimming with life and activity. There is so much to uncover and learn, it felt natural to me to form the game into an explorative experience to navigate this landscape. My earliest, and most memorable experiences of video games are ones that allowed me to explore a completely new world. I believed that a 3D explorative visualisation of soil could hopefully capture a similar feeling of wonder as the audience constantly uncovers new environments. Capturing that joy of exploration and discovery was really key.

However, I had planned to have a lot more player interactions which impacted upon the environment. The early concept was to explore the soil and then rebuild it. I love the agency that video games can provide. I wanted to link that player agency to having an impact on an environment. But throughout production, the game leant further toward exploration.

Can you walk us through the creation of one of the interactive mechanics you included in the game? The process of creating one of the tools the player will use to explore soil?

Throughout research and production, I was constantly questioning how to include more interactive elements which made sense and felt natural within this explorative experience. However, I was wary of adding in interactions which weren’t particularly fun, meaningful, or decreased the accessibility for the player by making them learn complex mechanics.

With the experience focussed on exploration, I was keen to add in interactive mechanics which relied on this, and rewarded the audiences for exploring. I was also interested in the player having creative opportunities to change and mould the virtual environment. In a number of scenes, the visual styling or atmosphere will change depending on the positioning of the player. So, as they explore, the colours and feel of the environment changes. While this is easy to implement and is a very simple form of interaction, the results can spiral into complexity. The visual journey of players can vary significantly depending on how they move throughout the space. I hoped this would be a playful but simple way to make the process of exploration more exciting and creative for players. 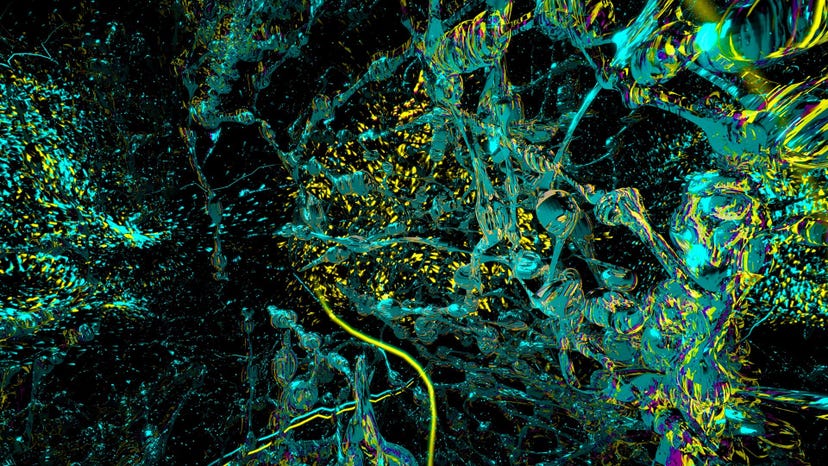 The game features a visually-striking look at soil. What drew you to use this visual style? What do you feel it added to the experience?

The vibrant style is inspired by the microscopic imagery I was responding to. A lot of the images were fluorescent, which contrasts heavily with the preconception of soil being purely earth textured. Some of the researchers’ videos contained flashing lights, as genes within plants fired off and triggered actions. I decided to embrace this vivid and glistening vision and use this as the world’s identity. Mainly because it felt so different to what I was expecting or thought soil would look like, but also to emphasise the sense of life within this world.

Following on from that, I wanted each scene to have a unique colour scheme or atmosphere, and for this to continually surprise the audience. There is so much wonder buried in the soil, I wanted the art style to do it justice. For each scene to not only present a new life form or interaction but to also look distinctly different. This was to encourage exploration, but also to suggest that this is only a glimpse of a massive world. In an explorative experience the world can’t all look the same.

Or to be cynical, with hardly any typical gameplay, it needed to look good.

Can you tell us a bit about the research that went into creating the game?

To gain a better understanding of the life buried within the soil, its interactions, and our effects upon it, I met with leading plant science researchers from the John Innes Centre, UK. They shared and discussed their research and microscopic imagery with me. These discussions helped to build up an image of this subterranean world and provide a wealth of inspiration to draw upon. The researchers also provided advice upon the script throughout.

Alongside that, I consulted publications and farmers to further understand their techniques for creating healthy soil to have that industry viewpoint on the past, present, and future of farming.

I also researched a number of video games which I thought exploration was a key part of their experience. 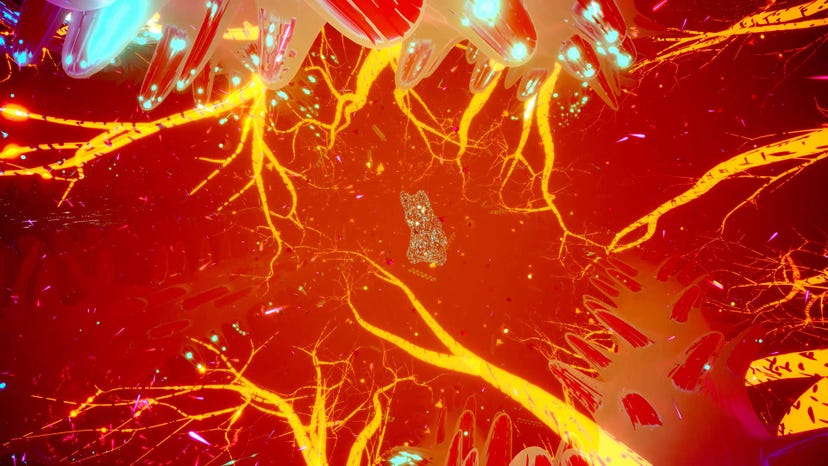 I feel that with reading about the subject, or even from viewing scientific images, it’s impossible to understand the scale of the ecosystem or to be able to view it as a whole. Research or imagery tend to isolate a specific element, when beyond that there is a complex web of life continually interacting or competing. I wanted to provide both a focus on individual life, as well as show that wider encompassing view. A gameplay experience provides the opportunity to shrink the player’s perspective to the scale of this ecosystem, as well as allow them explore and interact at this level.

Is there something you want the player to take away from this experience? What is it? How did you shape the play experience to help them connect with it?

Secrets of Soil has two aims. Firstly, to inspire people to think differently about soil. That it isn’t lifeless dirt, but a vital ecosystem brimming with life that we depend on. I wanted to reveal this to audiences and let them explore it. It’s difficult to care for something if you can’t see it, or if it's completely unknown to you. With every scene, I wanted to build up this world, with more life emerging the deeper the player dives. But to also allow the player to engage with this life, and carry out some of its interactions. I hoped this would connect players to the soil.

This initial world-building was key to provide context for my second aim: to visualise our impact upon soil. How we look after our soil can be a huge help in our fight against climate change. We have the capacity to destroy ecosystems, but we also have the power to rebuild them and work with them. I wanted to reveal the effects of intensive farming but show that there are achievable alternatives. I wanted to allow the player to regenerate the environment to demonstrate this, and provide that connection between player agency and real world impact.

Initially, I had planned to give the player a number of actions that they could do to bring the soil back to life, but I struggled to get them to feel right. It was also at this stage that I got caught up on the script writing, which was a massive time sink. In the end, I resorted to the player using a single button press to regenerate the soil, which provides a dramatic, if simplistic, effect. But I think that’s part of the project, emphasising that simple actions can have a dramatic effect if they are replicated. At the end of the experience, there is a link to activities for looking after the soil. It was important for me to provide accessible actions that anyone can do to help out.