Road to the IGF: Down to the Wire's Ice-Bound

An interactive novel and an augmented reality game that got kicked off by the suggestion to create a project to "imagine the future of the book," Ice-Bound is an IGF Excellence in Narrative finalist.
Christian Nutt
Blogger
February 19, 2015

An interactive novel and an augmented reality game that got kicked off by the suggestion to create a project to "imagine the future of the book," Ice-Bound: A Novel of Reconfiguration is also a serious stab at taking on the problems with branching narrative head-on in the indie game space, as one of its two developers, Jacob Garbe, outlines in this blog post:

"Combinatorial narrative is when several sections of text can be combined in different ways to yield significantly different stories. This differs from branching, 'Choose Your Own Adventure' models, because the possibility space explodes much quicker..."

The result -- which comes with an externalized Compendium, a full-color print book, in addition to the digital game -- is intriguing and multi-layered, and earned it a finalist slot for Excellence in Narrative.

Gamasutra spoke to Garbe and his collaborator Aaron A. Reed to find out more.

Jacob Garbe: I did an event-based mobile phone ARG (alternate reality game) before this, and digital art pieces with interactive projection. Before that it was hyperfiction. So you could say I came to games by way of interactive storytelling, and my interest is in pursuing new ways of creating compelling stories and experiences within these frameworks.

Aaron A. Reed: I've been making interactive fiction games for the last ten years, along the way becoming expert enough in the IF language Inform 7 to write a book about it, and make what was at one point the longest text game ever (Blue Lacuna). For the last few years I've been working along with Jacob on a PhD at the Expressive Intelligence Studio in Santa Cruz, researching experimental new ways of telling interactive stories and trying to get them into releasable games (2012's IGF nominee Prom Week along with this year's Ice-Bound are two examples).

We both also come from a background of being fiction writers, which is definitely an important part of how we approach gamemaking. 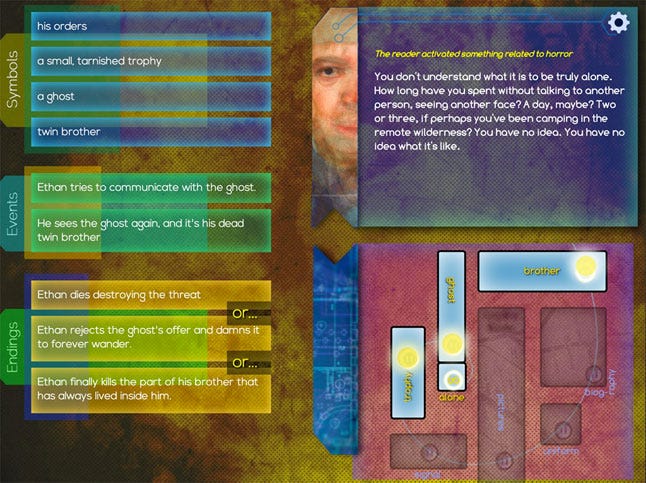 What development tools did you use to build Ice-Bound?

JG: Ice-Bound is cross-stitched from a collection of unlikely substances. The core engine is Javascript, and the graphics are all driven through HTML5 and CSS3, which makes it easy to put onto different platforms. We used the Metaio AR framework, which allows us to package up the code for the game in wrapper projects for both iOS and Windows, sort of like PhoneGap. It's definitely been a challenge dealing with the changing requirements of iOS web rendering and pushing out to two platforms at once, but we're making good headway!

JG: From the first conceptual stages, we've been working on it part-time for about two and a half years now. As Aaron mentioned, we're both also PhD students at the UCSC Expressive Intelligence Studio, so it's been a good way to enrich our on-going research into creating new narrative systems pushing for more procedural depth in games.

AAR: We were able to prototype and develop the core of the game over a summer of full-time work, and it's been finding weekends and evenings to finish it up since then.

JG: Originally it was a response to a prompt to "imagine the future of the book." It started with us trying to figure out what role physical books could have in the future. We settled on the idea that information deemed too sensitive for a human-level AI to know about (a "simulacrum") would probably live on in a physical book, to make it harder for them to get their hands on.

That was the idea that seeded the Compendium, the book accompanying our game. From that came the idea of an AI created from a scan of a dead author trying to figure out how to finish his masterpiece, exploring all these different ways it could unfold, yet lacking his original notes from when he was alive. 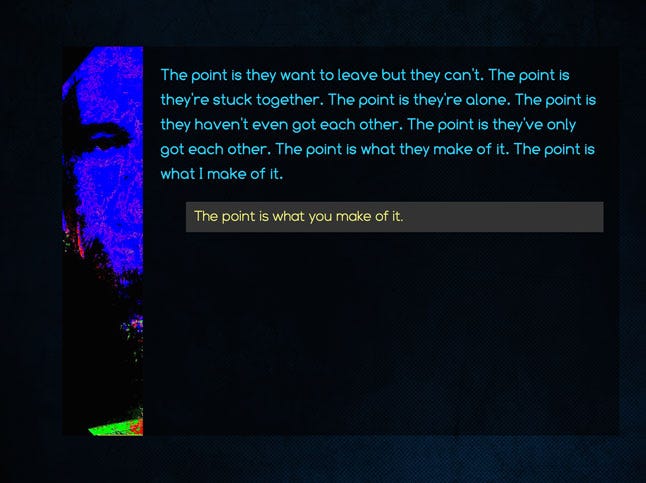 AAR: I'd say we were also highly inspired by writers we admire who make work that's inherently literary: not easily translatable to other media. One of the questions that gave rise to this project was that we've all seen game equivalents of a Spielberg movie, but where's the game equivalent of a Nabokov novel?

We always mention House of Leaves and Nabokov's Pale Fire as key inspirations, but also writers like Bruno Schulz or Fernando Pessoa, who created elaborate internal worlds shared through words and impossible to represent in a more literal medium like film.

We're certainly not saying we're anything like as good as these amazing folks, but we hope Ice-Bound is a small gesture saying, "Hey, there's all these things literary fiction can do other than deliver exposition, and it would be awesome to see more games take advantage of that."

Why did you run with the idea of combinatorial storytelling — and what did it net you, in the end?

JG: It's a wonderful way to both explore giving readers more control over how the story unfolds, and serve as an ouroboretical system metaphor for what the AI character is going through. There are thousands of ways the story of Ice-Bound can unfold, and giving the reader the ability to choose from that bewildering assortment plays nicely into the fiction.

Their confusion over "but what's the best ending?" mirrors the predicament of the AI, who is asking that very question. The same question we've asked ourselves, as the game's developed!

AAR: Making a largely text-driven game, you're freed from so many shackles, especially (in our case at least) the need to voice-act everything. We can really go wild with letting the player's input actually shape the story they're playing. Language can be remixed in so many ways: Ice-Bound can swap in different words to customize a scene for a particular character, weave in dynamic references to a setting or time period dynamically, or mix-and-match scenes related to themes the player is more or less interested in.

I love the way interactive stories become a dialog between the author and the player. Combinatorial storytelling specifically (using a "bag of Legos" approach instead of a "branching path" approach) has been really delightful to experiment with, because my view is it makes the player feel more directly involved in shaping the outcome: they're literally building and rebuilding their story, piece by piece, and that experimentation feels a lot easier and more organic than loading a save game to try a different path. 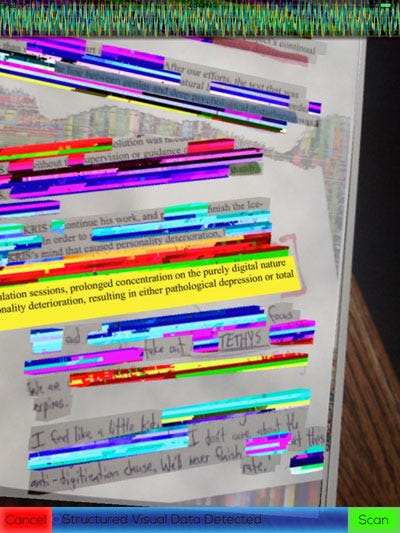 Why go with an AR book, as well? Seems like a complication, but obviously it yields interesting creative possibilities for you since you chose to go with it. So tell me more.

JG: The AR book serves some critical purposes. For one, it lets us provide concrete, non-dynamic world-building material to help situate the game. The digital part of Ice-Bound is split between building the story itself, and working with the AI. But the AI doesn't know everything... he has holes in his memory and can't be truly relied upon. The book gives us a space to build out the context for what's going on, as well as a unique way to gauge what the reader is interested in, through their interactions with it.

AAR: We really wanted to explore the interplay between physical and digital books: how will they co-exist in future years? I doubt physical books will ever entirely go away, but what niche will they fill for future generations? And how does this transition mirror other analog-to-digital conversions our culture has gone through and will again in the future?

AR is a cool way to bring this question, this transitionary time, to life: the game can change how the player sees the physical book with AR overlays, but the player also chooses what pages of the book to show to the game (and our A.I. hero, KRIS), effectively using it as a controller to shape the evolving digital story. It's complicated, but it's a really beautiful complexity, we hope.

What do people want from narrative games? What do you find people most appreciate about Ice-Bound?

JG: When you ask people to make choices in games, they want to get the sense that their input is meaningful. That it has lasting effects on what happens, or there's a specific purpose behind what you're asking. Our hope is that by building the game system around making those choices matter, the players feel it's truly an act of collaboration and exploration. We also hope that, through the sheer multitude of combinations, Ice-Bound will reward deep reading and re-visitation.

JG: I've played many of them, and quite enjoyed myself! We're really honored to be in such excellent company. I think I'd like to highlight PRY, because it's got a narrative interface that I really think is unique. Memory of A Broken Dimension has a really gorgeous glitch aesthetic. Coming Out Simulator has a story that hits you in the gut. 80 Days is utterly charming. That said, I won't say how long I've been hypnotized by BECOME A GREAT ARTIST, or what my current hole is in Desert Golfing (uh 2000ish), or what my playcount is on the Ethan Carter soundtrack. I'm really glad to be in such a vibrant, creative community of people!

AAG: Definitely everything Jacob said, and it's been especially wonderful to see 80 Days and Elegy for a Dead World get so much love. Jon Ingold (co-founder of Inkle, which released 80 Days) cut his teeth making text adventures just like me, so it's personally satisfying to see so many games based around the power of the written word getting acclaim and attention.

JG: I think more than anything it's truly becoming a fulcrum point for the games industry as a whole, which I couldn't be happier about. The idea that small groups of people can make highly focused games dealing with specific viewpoints and issues without worrying about capturing a "key demographic" is crucial.

I think that also means -- especially given current events -- that we have to focus on keeping our community inclusive and open, welcoming these new voices and perspectives. No one should be shouted down. The more people make games and bring their unique perspective to that creative act, the more enriched we'll be as a community, both as makers and as players. It's up to us to support each other, and make it a safe and welcoming space.

AAG: It's been a rough time for a lot of people, to say the least. I don't know of any peers of mine making indie games who haven't been shaken by escalating online harassment, whether it's directed against them personally or not.

I think more than ever it's important for gamemakers to tell stories true to themselves, instead of what they think an audience wants; for reviewers to share the stories that affect them and change the way they see the world; and for everyone to call out bad behavior and change what's considered acceptable in our shared spaces.