Did you ever want to be a hole? Gamasutra speaks to Ben Esposito about Excellence in Visual Art nominee Donut County, its pleasant pastel visuals, and its gentle provocation.
Christian Nutt
Blogger
February 19, 2015

Did you ever want to be a hole?

Donut County, by independent creator Ben Esposito, casts the player as an all-devouring, perfectly round cartoon hole -- one that consumes everything around it. The gameplay idea is simple and pleasurable, but the game also reflects Esposito's questions about Los Angeles, as discussed in this Venus Patrol interview:

"... the hole is any process of erasure -- it swallows up places and things. ... What about people? Cultures? What are some of the forces that cause groups of people to disappear?"

The result, then, is a gently provocative game that can be enjoyed in very different ways. Donut County's colorful (yet somehow disquieting) visuals have earned it a nomination for Excellence in Visual Art, and in this interview, Esposito talks about how they're an intrinsic part of the game's very design.

I started by modding Quake and Half-Life!! I wish modding was still popular, because it’s a great way to learn about game-making. I studied some art and comuputer science in college, but making games was always a hobby until one day I saw a prototype video of The Unfinished Swan. I knew I needed to work on it. I had no professional experience, so I made a game as my application to them. That was my first professional gig.

I still have a lot of student loan debt, though!!! If you’re reading this, please buy my game!!! Help me fix my mistakes!!!!!!

What development tools did you use to build Donut County?

I use the Unity3D engine + Maya for making assets. It looks quite flat but everything is 3D.

I don’t use any fancy technical tricks or effects or shaders, in fact I had to write a bunch of my own stuff to avoid Unity’s built-in effects. I try to keep everything as simple and crude as possible. It’s a constant effort to stop myself from creating systems I don’t understand lol

You gotta be pretty good at lying to yourself to make a big video game… I’m a pro. I’m making this game alone… Am I stubborn? A perfectionist?? What am i trying to prove??????? Nah, well maybe, but it’s just… the way I learn things. I have to make every mistake myself.

Working alone means it’s taken a looong time. I’ve been working on this game nearly full time for over two years now. I say "nearly" because I also work part time on other amazing projects like Arcane Kids’ Perfect Stride and Giant Sparrow’s new game What Remains of Edith Finch.

I understand not everyone has the privilege to work the way I do… I have a support network of friends and mentors. Thanks to the partners at Indie Fund and the Glitch City LA community :-) 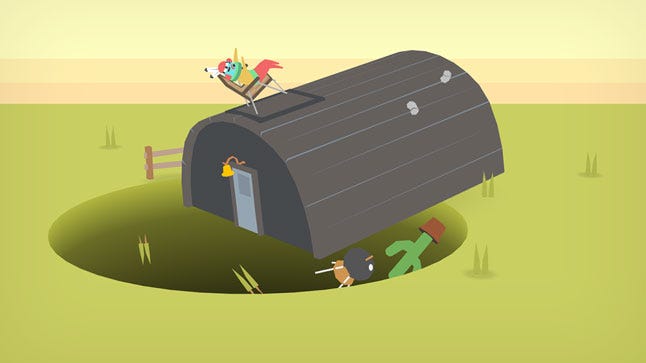 I can’t take credit for the idea of the Hole. It came from Peter Molydeux, a parody of the game designer Peter Molyneux. In 2012 he held a game jam to bring some of his silly ideas to life, and I loved the mundanity of playing as a hole in the ground. It’s mundane but so mysterious… so I made a prototype for the game there.

I loved that jam because I do find Molyneux genuinely inspiring. The parody was very uncynical. It supported Molyneux’s ambition and earnestness. I thought that was worth celebrating.

How do you reconcile the desire to create playful experiences that are also meaningful experiences? Is that even something that has to be "reconciled"?

A game has got meaning whether u like it or not!!!! If the work seems apolitical that just means the underlying structures are invisible to you… U should be very scared.

Making Donut County wasn’t so much a process of reconciliation, it was a process of education and self-discovery. Why do I want to be devoured by a perfect hole? I spent two years trying to figure that out.

I took guesses at what was so resonant about the hole. I fricked up A LOT. I learned a lot about my internalized biases. I did some cultural appropriation. I’m not proud of that stuff, but I think I’m a better human now that I’m better-educated. I didn’t change the hole to fit an arbitrary meaning, I changed myself. 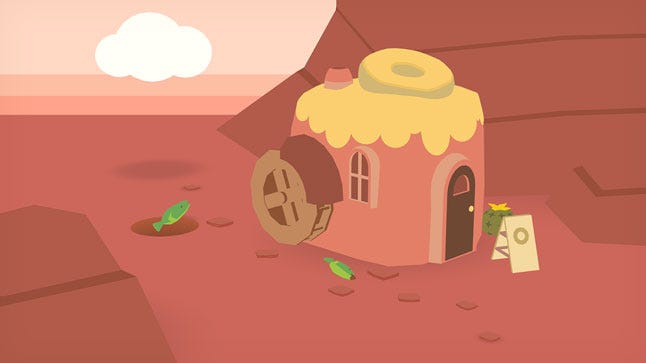 How does the visual style of the game reinforce its gameplay? In other words, it seems to me having clean, readable objects would make erasing them somehow more "satisfying" to the player. Is that way off base?

I always think “art style” is a messed up term because it reduces the role of visuals in gameplay. The visuals ARE gameplay, at least in my work and the work I’m interested in. You can’t swap out the style without fundamentally changing the work.

A lot of stylistic decisions came from the dynamics of the game. For instance, you won’t find many tall and skinny objects in the game because they’re really hard to fit in the hole!!

Aside from those things, I try to establish artistic constraints in any project. The constraints keep me consistent, and force me to come up with novel visual solutions. Donut County has really harsh ones:

Ok so I totally break these in a few places, but only for important effects!!! This also keeps me from getting overly technical. That’s really important when I’m doing everything myself.

How do you arrive at a specific visual mood — in other words, a style that supports the feelings you want to communicate? Is that a goal?

It might seem basic but colors take care of 90 percent of the mood. After that, picking the right level of abstraction.

Visuals are the most immediate way to communicate with players. Donut County’s visuals are designed to be disarming, haha. They’re pastel-colored glasses which kind of absolve you of the questionable things you do as a hole in the ground…

I try to remove uncannyness when possible, which is kind of tricky in a physics game in which really bizarre / unexpected things can happen. I want to implicate you in the satisfaction of devouring everything.

I like playing really small games….. Here are a few I enjoyed:

Play Rooftop Cop!!!!
Play Metamorphabet!!!!
Play how do you Do it!!!!
Play Curtain (honorable mention in narrative)

I answered this question last year!!!!