The popular MMO, which originally launched in 2003, has recently replaced its character creation system with an entirely new one, and here, CCP's senior staff takes Gamasutra readers on a tour of the concepts and methods that resulted in the soon-to-launch tool.
Game Developer
Staff
December 09, 2010

[CCP Games senior staff discuss their multi-disciplinary approach to breathing new life into character creation in EVE Online's Incursion expansion, while preserving the avatar traits players have become attached to over the years. The new character creator system is a precursor of the upcoming Incarna release, where players will emerge from their spaceships and interact as highly-detailed full body avatars in space stations.]

Players often form attachments to their avatars in any massively multiplayer online game, and EVE Online is no exception. With over seven years of history and a dedicated player base, the decision to revamp the look of characters that players have come to identify with presented CCP with both opportunities and challenges.

It was decided early in the process that improving the aesthetics of EVE Online's characters should not come at the expense of casting aside the qualities players identified with in their avatars. The goal for CCP then was to build upon the strengths of the old character creation system when ushering in the new.

As a first step towards Incarna, the introduction of full body avatars to EVE Online, we've recently released the in-development character creation and customization system on Singularity, our public test server.

The internet is flowing with portraits and video footage of the new characters and the feedback we've been getting is overwhelmingly positive at this point, even though only about 50 percent of the functionality has been made available in this initial test server release.

There has been a great deal of planning and work involved with putting this system in the hands of the EVE Online player base in the game's upcoming Incursion expansion, and we thought it would be fun to write up a little piece on how development of the character creator has progressed so far.

To provide you with an accurate picture, we've gotten a few of the key players at CCP involved in this process to share their thoughts about design inspirations with the character creator, how the new system improves upon the old, and the technical hurdles encountered along the way.

It's interesting to note that some of the people involved in this project were also part of the team that built the original character creator for EVE Online prior to its release in 2003, while others have only recently joined the company. The melding of legacy developers with the fresh perspective of the new has certainly added to the depth of rich detail seen in these new avatars. 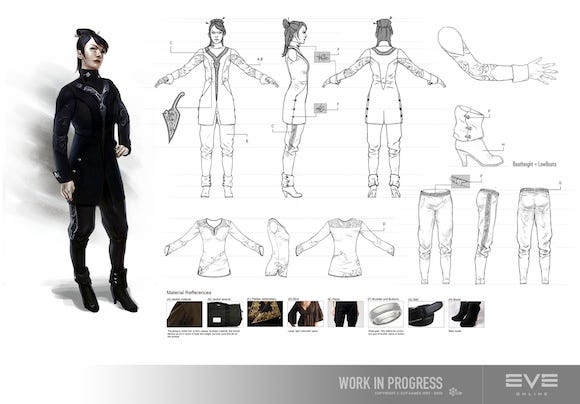 When it came to overhauling our character creator, there were a number of creative challenges to be dealt with. Ignoring technological advancements, EVE Online's visual style has matured considerably since 2001 to 2003 when our original character creation assets were developed.

We decided to move beyond the old costumes, accessories, hairstyles and character heads and build completely new ones which were still rooted in the same backstory as the original assets. Given the fact that we have a large number of players that have been with us for a long time, we knew that we would be "hurting their children" as they had grown attached to their existing portraits and it feels strange to have all of that taken away and replaced with a new system.

So, extra care was taken to keep the spirit and core style of each race, bloodline and gender, despite us evolving them by seven years.

EVE Online is largely about empowerment. It's about giving players multiple interworking yet simple tools and operational freedom as well as embracing emergent behavior, making players feel a strong sense of ownership and control. So our key theme for the new character creator is that the player was to feel that he personally, single-handedly, through his decisions and skill created a hyper-realistic human representation of his character in-game. The player should want to call up his mother, brimming with pride, saying, "I have created a masterpiece!"

While they are working with 3D assets and textures custom-created by highly talented artists and programmed by large teams of engineers, we want players to completely forget about the fact that this is a piece of software that happens to use 3D assets and shader trickery. We tried to remove sliders as much as possible and instead have the players act on the model itself, like they were sculpting.

Again, people who are not professional 3D artists will feel as if they are sculpting or pulling clay, while in fact they're mixing and blending 3D assets painstakingly created by our team of artists with the intent of achieving a sense of subjective mastery.

When EVE Online launched, the character creation system was well-received. However, the original character designs hadn't been retouched since that time, and we felt these avatars were behind the times, both technically and visually.

We wanted the new characters to be hyper-realistic and yet slightly exaggerated and cinematic to fit EVE's dark and gritty setting.

Instead of just blindly copying the old characters and making high-poly versions of them, we studied the original inspirations for them, whether that was ethnicity or just strong archetypes in general and determined what facial features they had in common.

We also wanted the final archetypes and the player-customized versions of these avatars to look like strong protagonists, individuals capable of leading massive fleets or controlling vast swathes of the universe.

Of course, that goes for female characters too, which can be customized to look strong and mature, and yet beautiful. A system with the depth and flexibility to create female avatars which embody these traits is a rarity in the industry today.

Choice in wardrobe adds another level of customization to the new character creator. When designing the new clothing, we had to factor in a number of variables. For instance, since players will be able to mix and match clothing assets, we found that we couldn't limit choices to styles inspired by a particular race or bloodline.

The wardrobes available must fit well together without appearing too ceremonial or costume-like. We do, however, plan over time to incorporate options that are inspired by certain races and bloodlines, including hairstyles, tattoos, and even tribal scarification. 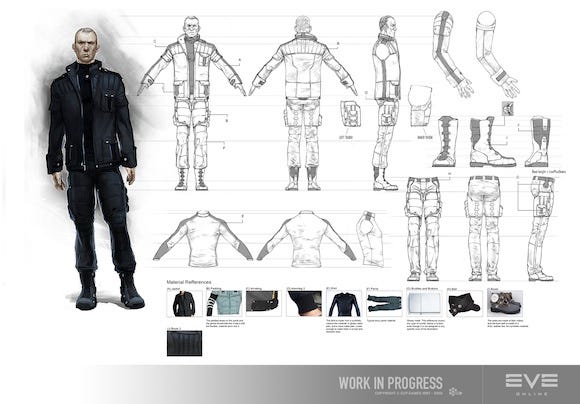 EVE Online's character creation system wasn't just revamped -- it was completely re-designed – and this brought us back to square one in many respects. When the art team assigned to the task started to scope, evaluate and brainstorm we quickly realized that this project was not going to be a stroll in the park.

Considering the all-or-nothing quality level we all agreed on when we first sat down to discuss the project, it was obvious that this was going to involve sweat and blood. But we also knew that eventually the results would leave EVE Online players and CCP employees alike in awe.

The process would draw upon a range of talents and skill sets, so we also decided to expand our creative muscle and brain power by beefing up the internal team with temporarily-contracted specialists from all around the world. Considering the different time zones involved and the number of people on board, you could say that at any given time throughout the entire production cycle there was someone, somewhere on the planet working on the project.

One of the principles the art team tried to follow was to have as many of the models as possible being created more or less simultaneously to ensure a constant holistic view. Of course, this led to a continuous stream of adjustments and an intense creative effort to be both laser-focused on each model while providing us with an encompassing overview of the entire project.

Hundreds of photos, sketches and drawings were used in the early stages of research followed by months of drawing and painting which preceded the production of 3D assets and textures. An entire library of new shaders was created to support the visual target we set for the project. We now have a foundation for near-infinite possibilities and our (digital) drawers are already full of designs and concepts that will keep us moving forward for years to come.

We may never exhaust those possibilities, given our vision of EVE Online as a continuous path of progression, but this is what holds the game's aesthetics up to a consistently high standard.

The decision to move forward and evolve our character creation system brought not only new art assets but also introduced new technical hurdles and pipelines connected to the art creation process.

Fortunately, CCP maintains a strong relationship between the art, technical art, and core technology departments, which made it possible for the artists to stay true to their vision -- up to 4096 x 2048 pixels in texture resolution on the most powerful machines, with over 6000 triangles at the highest LOD for character faces and over 30,000 triangles for a full character at the highest LOD.

The versatility of the sculpting system in particular is something we're pleased with. The simplicity of use in creating an in-game persona with the new character creation system may seem trivial to the user but there were a number of technical challenges to be overcome by CCP in making this happen.

We wanted to build a system with real depth yet one that doesn't mire users in complexity.

To those of us in the art department, this meant months of work: creating a wide array of blend shapes so that EVE Online players can mold and pose characters to their liking via direct manipulation of 3D models; asymmetrical facial expressions that can be controlled at will; creating a large number of texture compositions ranging from makeup to different colors and styles of jackets that can be swapped with the click of a button; and runtime blending of texture maps to go hand-in-hand with those expressions and animations.

Of course, the choices we made in middleware partners have given us more freedom. Natural Motion's Morpheme helps the animators bring the characters to life with an animation posing system.

In addition, NVIDIA Apex simulation lets us imbue avatars with flowing hair and richly textured clothing. This injects even more realism into the character creation system that players will experiment with in EVE Online's Incursion expansion and beyond. 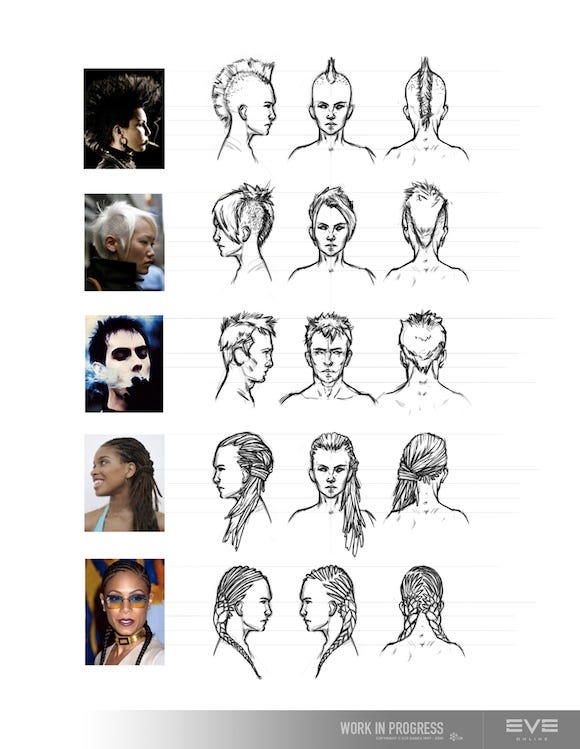 We hope this has given you some insight into what it takes to refactor a system of this magnitude and urge you to check out some of the screenshots and videos posted by the EVE Online community, or simply see it for yourself on Singularity.

This is just the first step in delivering the long-awaited Incarna functionality currently slated for a 2011 release which will be an absolutely unique experience.