In the 1990s, the MechWarrior series carved out a unique mix in the PC gaming space. It appealed to the sim sensibilities of the adjacent flight simulator craze, it attracted fans of the popular wargame, and it was a unique science fiction franchise that didn't have much competition on consoles.

Back in December, Piranha Games CEO Russ Bullock dropped by the GDC Twitch channel for a chat about MechWarrior 5's development, and explained how the mid-sized Vancouver studio set about remaking the MechWarrior experience for its now-niche fanbase in 2019.

A pilot's life for me

As mentioned up top, part of the appeal of the '90s MechWarrior sims was how well the games integrated the flight sticks that sat on the desks of many PC game players at the time. The appeal of the series wasn't just "I need to move my robot to the left," it was "I need to turn my joystick left so the robot turns left," giving the sensation of controlling the pilot, and not just the mech itself.

With flight sticks far out of fashion (though still supported by MechWarrior 5), Bullock still said it was worth it to design an experience that felt like the classic games, with a focus on building and evolving the series' conventions. "You have a lot of tough decisions to make early on in production. Do you want to attempt something radically different that you think today’s gamers want, to adapt to all of today's gamers and try to establish it in that regard? Or do you want to give longtime fans of the franchise what they want?" he explained.

"We chose the latter and I think it’s for some good reasons."

Bullock described MechWarrior 5 as "the kind of game that requires a tutorial," for both returning and new players. The game's optional third-person camera helps players adapt to the classic torso-twisting mechanic that lets players look in one direction while the Mech advances in another.

He credited this system, and the camera supporting it, as a big part of the "piloting" appeal mentioned before. "Even though it seems to people there’s slower combat than say your average first person shooter," he said.

"I think the amount of things going through a person’s brain while they’re playing a game like MechWarrior is that every bit is still intense as any higher-twitch FPS cause you’re always making movements on your controls and you’re thinking ahead every five steps."

When it came to designing the look and feel of MechWarrior 5's mechs, Piranha Games' developers were able to draw on substantial experience and resources from their time working on MechWarrior Online. According to Bullock, all of the mechs that appear in both games were imported into MechWarrior 5 "as is," minimizing the remodeling needed to ship the game.

But with a slew of models already on hand, Bullock says the company's next step was to evolve the technology behind battle damage, to contribute to that sense of piloting a "walking tank" taking hit after hit that will eventually need timely repairs.

"MechWarrior Online looks great but it’s limited to basically arm removal. Once the arms are blown off that’s the only thing that has a model swap if I’m not mistaken," he recalled.

"In MechWarrior 5 we have the laser glow, the damage texture, but we wanted to go a little further so we said damage texture represents your armor. You still have armor left on your mech. But we’re actually going to do a model swap. And then once the internal structure is gone, that’s when we’ll do another model swap."

Bullock called this part of the process "a big effort," describing a whole system that has to model armor removal, structure removal, and paint a picture of a thoroughly bruised mech that the player will encounter when they return to their mech lab to manage repairs.

Part of the piloting appeal for MechWarrior comes from the "small business owner" simulator that pops up between missions. While players are following a linear plot that proceeds from mission to mission, they're also managing company costs, paying to repair damaged mechs, recruiting pilots, etc. etc.

This slower-paced experience has long served as a counterbalance to explosive mech missions. To update it for MechWarrior 5, Bullock said that the goal was to try and fulfill more longtime player fantasies, like allowing travel anywhere in the solar system on the game's starmap, while adding new pressures to keep driving interesting player choice. 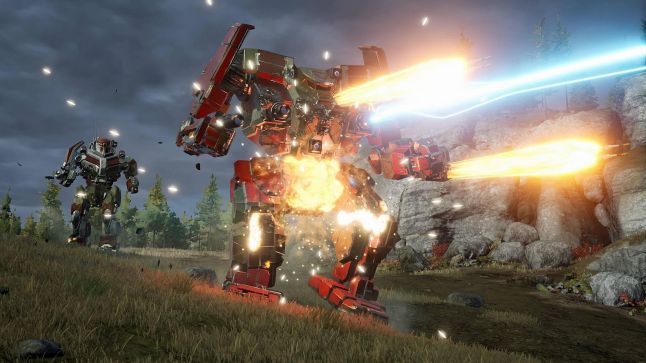 "I think one of the bigger innovations we did in our game that I don’t think has been done before is this notion that...sure you can repair your mech anywhere, but in the warzone it’s more expensive and it takes more time," Bullock explained. "Because we wanted to make the starmap alive where players are actively always thinking about the starmap and where they do certain things."

This decision creates different zones on the map that are effectively more costly and time-consuming to operate in. Unless players are still able to maintain positive cash flow while exploring in them, they'll need to plan an exit strategy or incur severe losses. It's particularly a challenging layer of meta-design for a studio that built its identity around the franchise's core mech combat.

Piranha Games' gamble on inviting old fans back to the franchise seems to have paid off, though Bullock acknowledged it wasn't any kind of surefire plan. "You could have gone a different way, you could have radically changed and revolutionized the entire thing and hoped that it would find an audience," he mused. "But we started with our core audience and advanced the concept from there."