Revealing one of the finer details in Raiden III: The ability to make a conscious decision to kill an unknown civilian.
Michael Molinari
Blogger
March 25, 2009 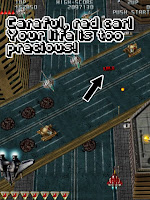 Having much more to do with the morals and decisions of warfare than those of shmup mechanics and the did-you-ever-notice spiels I usually blurt out (although this entire post is about something I'm wondering if you've ever noticed), I'm interested in just what was going through the heads of the developers at Moss when they decided to allow you to kill an innocent bystander (actually a driver, but keep reading) in Raiden III for a rather uneven compensation.

The whole scenario unfolds within only a minute of starting your first mission. You begin soaring over what looks like a desolate and war-torn city, already in the midst of destruction and chaos. The only movement on the ground comes from tanks that are quite aggressively firing at you.

All of a sudden, atop one of the highways, a red compact car blindly roars by from left field, entering the crossfire. Naturally, you'd just want to blow up everything in front of you, but on this specific occasion, you're blowing up much more than an enemy; this driver was trying to save his own life.

You may be wondering why I even care about that car. For all I know, it could have been driven by one of the generals of the opposing force, or even be a pilot running late to the hanger bays that morning. However, since it fires no bullets at you and simply wants to use the highway as it was originally designed, I can't help but feel guilty whenever I destroy it.

The payoff is certainly not worth it, a measly 1000 points in exchange for his death. I eventually played through with the intent not to blow him up, and guess what? The car swerves out of the way of an oncoming tank before exiting the screen. He clearly was in a rushed, panicked confusion during this battle. And you just went and blew him up. 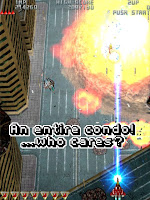 This begins to make me wonder why I don't care about blowing up other by-standing things. In DoDonPachi, entire warehouses of who-knows-what are destroyed, simply for the pleasures of watching explosions and collecting stars (and possibly uncovering a fragile skeletal bee).

In Guwange, the player sometimes blows up entire wooden watchtowers in 14th Century Japanese villages (while at a casual strolling pace, mind you). However, in none of these situations do the presumably destroyed individuals bare a soul, a will to live, or even a rather dashing vehicle.

I couldn't help but compare this fascination with the destruction of life to the 1996 movie Independence Day. Though destruction of innocent life goes on throughout the whole film, I feel quite differently when those immature alien-inviting New Yorkers are decimated as compared to how compassionate I am for the survival of Jasmine's dog Boomer when escaping a flame-engulfed tunnel (yes, I know - I'm just as shocked as you are that someone actually uploaded a screenshot of the very moment to which I'm referring).

The point here is, we as an audience were swayed into having little-to-no emotion for the New Yorkers (though still just as innocent as those who weren't inviting the aliens) and had much love for a dog trying to escape fire alongside co-star Vivica A. Fox. Why did we feel this way? Because the dog wasn't a bad guy at all. He wasn't twisted or evil or filled with even the slightest hint of bad intentions. And neither was that red car.

For the sake of tying things back to shmups, here's actual footage of someone blowing up the unfortunate vehicle (@ 0:53). Note how an entire condo is blown up immediately afterwards and how little I care about it.

Know what's even worse? In Dual and Double modes, there are two cars careening to their doom atop that highway. A moment of silence for the blue car, too.