Megan Sparks, senior narrative designer at Obsidian, gives us a rundown of how she creates the characters and worlds of The Outer Worlds.
Kris Graft
Publisher
June 14, 2019

For many RPG players, there’s been a Fallout: New Vegas hole left in their hearts.

Released in 2010 by publisher Bethesda and developer Obsidian, New Vegas was different from the Bethesda-developed Fallout 3 that came before it. New Vegas was arguably more surprising in the storytelling and narrative department; inarguably, it was a weirder game than its predecessor.

It all makes sense when you consider that Obsidian has the DNA of Fallout coursing through its veins. Founded by Fallout 2 developers from Black Isle Studios, a subsidiary of Fallout creator Interplay, Obsidian couldn’t help but infuse New Vegas with that mix of dark, silly strangeness that made the series so memorable.

And here we are in 2019 – Obsidian is now owned by Microsoft, and is having a game published by Take Two's label, Private Division. Through this entanglement of corporations emerges what’s being called a spiritual successor to Fallout: New Vegas, and it’s called The Outer Worlds. Helmed by Tim Cain (best known as creator of Fallout) and Leonard Boyarsky (also known for his work on Fallout), The Outer Worlds could give players a unique dose of RPG weirdness that so many are looking for, in a brand new universe where corporations rule everything.

Working as senior narrative designer on The Outer Worlds is Megan Starks, a self-professed (chaotic evil and) Fallout fan with credits on Fallen Earth, Deadfire, Tyranny, and other games. At E3 this week, she gave us a rundown of how she creates characters and worlds in The Outer Worlds.

What’s it like working on games with so many branching dialogs and narrative?

Working on Obsidian games is really rewarding, because we’re always trying to account for players trying to take different routes through the conversations. The content is based on the way they want to play the game, whether they want be good or evil, somewhere in between, whether they’re doing combat or an intimidation type character or stealth, leadership – we really provide lots of different routes through any given conversation.

At the same time, we want [the game] to react to everything, So we’re always keeping track of what players are doing in the game, and having the world change based off of that.

So what kind of tools do you use for your job?

We have a proprietary editor for making conversation in the game. But it’s really nice – it’s a node-based system. Basically what you do is you make a file that’s going to be the conversation, and you can put different conversations on different NPCs.

Within the nodes you have this string, the actual writing. So we’ll have Catherine say ‘Hey, what do you want?’ and also you do all your scripting on that node. Basically you pull in the dialog and the VO and you also pull in what’s happening - if she’s giving you an item, if she’s advancing your quest, stuff like that.

It’s based on drop-down logic that goes top-to-bottom. For example, usually the way that I structure conversations [in the tool] is at the very top is ‘You’ve exhausted all of this person’s quests,’ and if you come back to them, they just have a single reactivity node that’s ‘Thanks for helping me out!’ or ‘Screw you, I hate you forever!’ You just work your way down. I always try to have a unique intro, especially for important NPCs.

When you introduce a new character, how do you go about giving them that initial impact?

Usually when I come up with a character, I try to think of, first off, what is important to the quest that you’re doing? We’re always trying to convey to the player ‘these are the things that you need to know, the information for the question, and the different ways you can do the quest.’

Beyond that, it’s about what type of person is this character - what’s interesting about them? We’re usually trying to come up with one ‘thing’ that’s an interesting takeaway from interacting with them. Maybe it’s a personality quirk or a manner of speaking, or just their disposition. Then based on whether they’re heroic or villainous, you can always imagine making them feel more real in the world. You can think what this character wants most in the world, and what are they willing to do to get that? And then also, what is their greatest fear? And if you can answer those kinds of questions, you can actually make them feel more realistic.

When you’re making a game where you want to tell your own story, but you want to give players agency, how do you balance that?

One of the things we try to do a lot is we don’t force the player to say something. We don’t ever want the player to have one dialog option, or one thing to say. Even if [we give the option of] ‘yes’ or ‘no,’ that’s the bare minimum. And beyond that you want different personality types – am I a good guy, a bad guy, am I a nice person?

I love when games let you pretend that you’re good when you’re totally lying [laughs]. So I think it’s just taking into account all the playstyles, and not just what your preferred playstyle is, but what other people like.

I usually play chaotic evil in games, and my husband always plays lawful good, so a lot of times [when writing], I have to ask myself, ‘What would my husband want?’ [laughs] 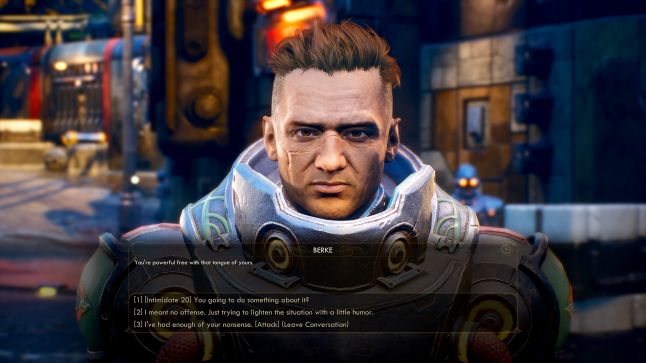 What's your process for coming up with characters from scratch?

When we worked on [the town of] Fallbrook, and Catherine Malin who runs Fallbrook, basically the town is owned by an organized criminal faction. They’re a bunch of smugglers, and they’re working on this planet that is blockaded by other corporations. They’re the only way to get in and out, and get food and drugs, stuff like that.

We thought it would be cool if the town had kind of this Deadwood vibe, like sci-fi and Western. I started thinking about the different characters in Deadwood and thought [Al Swearengen] would be a great touchpoint character for Catherine Malin. So I used him loosely as a general archetype.

And once I started writing her, I tried to think about what she’s like on a more individual level, what her backstory might have been. These are things that don’t come up [in the game]. We don’t very often, or I try to avoid, having the player be like, ‘So, tell me about you!’ You want those things to naturally progress in a conversation, so you have a sense of the story being an iceberg – what you’re seeing is the tip of it, but you get the sense that there is something much deeper underneath. That makes things feel realistic.

When you’re talking about Fallbrook, what goes into fleshing out the details of the town and the environment the characters exist within?

In the universe of the game, it’s because corporations own everything, and it’s a little bit of a dystopian society. You’re not able to take vacations or have leisure time, so I thought the very wealthy people in Byzantium would think ‘Wouldn’t it be a trip to go to basically this scummy version of Vegas!’ And they’re paying tons of money to come into this smugglers’ port to gamble and drink and have this leisure time.

So you have these two dichotomies going on in the area. Then we just built it from there – writing starting with your major characters, then you add in your vendors, and your sidequest-givers, then your ambient NPCs and flesh them out to tell the whole story. 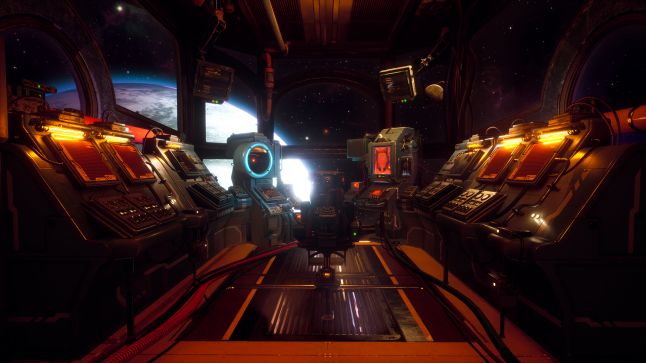 Is this game a critique of capitalism?

I honestly don’t know if there’s any sort of higher-level [meaning]. I think they [Cain and Boyarsky] just thought it’d be really funny to create a society that’s really dark and a different take on how the future could go.

What is it about the Fallout series that really made an impact on you, and how do you think that’s influencing you?

I think one of the things that I really liked – and this may sound a little sad because I’m a little bit of a younger gamer – so my first Fallout game was Fallout 3. But one of the things that I really liked about it was that it was sort of a coming of age story. It was one of the first games that I played where you could make a female character, and have a female coming of age story. I felt totally empowered, like ‘Hey, this is my story and I’m going after my dad in this wasteland.’

But I also really like that it was one of the first games that I played where you could manipulate the karma to be good or evil, and I had a lot of fun going around and murdering everyone and then like, giving a hobo some water. [laughs]

I think that introduced me to the concept of having lots of different dialog options, and I just got hooked. And of course, I do like darker genres like that – Bioshock, Borderlands, and looking forward to Cyberpunk. It just seemed like a really good fit.