Q&A: The appeal of building a natural world in Equilinox

Equilinox is a soothing game of shaping nature, having players create their own ecosystems of plants and animals living in harmony. Through the flora and fauna that you place throughout the world, you’ll feed into the needs of your living beings, creating a healthy world.

Karl Wimble, developer of Equilinox, put a deep love for the nurturing, calming power of nature into this sandbox title, using his own happy experiences with plants to create a slower, more relaxed game.

Not only would it be relaxing to play, but in some ways, its nature also made it more relaxing to develop, creating ways for even the developer to unwind while creating it.

Intrigued to learn more about Wimble's naturalistic approach to game development, we caught up with the man himself for a quick chat about what happens when game dev and mother nature cross paths.

How a love of nature created Equilinox 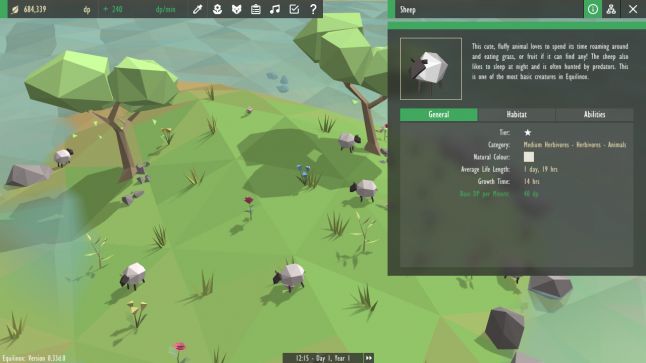 I've always been very interested in nature and love being outside in general. When I was young my mum used to teach me all about the different birds and plants in our garden and I really enjoyed growing things of my own, especially vegetables! I still do that to this day, in pots, on the balcony, or anywhere that I can find space for it! So, back in 2015 when I was deciding what project to do next, I wanted to make something nature-related to allow me to tie together two of my passions: nature and game development.

When I was deciding what type of game I wanted to make, I first considered making something similar to a farming simulator, as I've always enjoyed growing vegetables myself. However, there were already a lot of farming games in existence, so I decided to go for something similar but with a bit less "structure" - something a bit more organic. That's where the idea of creating and balancing ecosystems came from.

At the start, I had plans for a very sandbox-y simulation game, but as the project progressed, my ideas for the game altered slightly and I started incorporating more aspects of city-builder style games. Concepts such as paying currency to buy new objects for the world, earning currency back from certain objects, unlocking newer and more interesting objects as you progress, and managing your world to ensure nothing gets out of balance.

The appeal of building a natural world 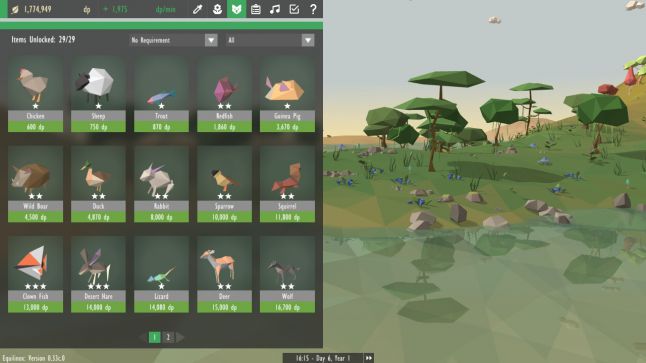 For me, personally, I've always found something inherently satisfying about nurturing something, putting effort into growing it, and watching it thrive and grow over time. It's like a very physical representation of progress - you put in the time and effort to look after something and you get to see the results very clearly as the plant grows. It's even more satisfying when the plant produces fruit or vegetables, so that you can literally harvest the fruits of your labor.

So, I imagine that it's a similar feeling with the wildlife in Equilinox - you have to make some choices and put in some effort to make the habitats suitable for living in, and you then get to see your work pay off as the plants and animals flourish. Plus, in Equilinox, this happens a lot faster than in real life, so the satisfaction comes a lot quicker. Combine that with completing tasks and continuously unlocking new species with different behaviors as you progress, and you get a rather satisfying experience.

On giving players a variety of worlds to build 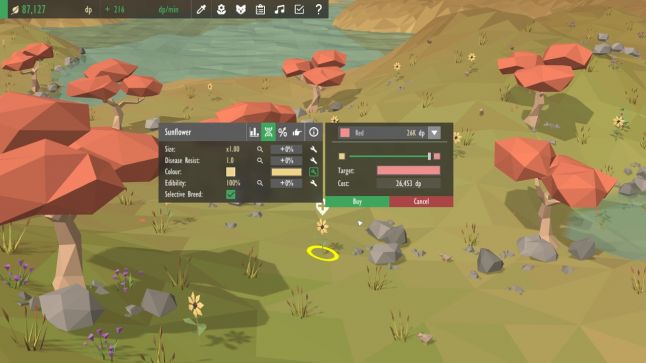 The main variety in the game comes from the fairly large number of species and the various different biomes. Over the years that I've been working on Equilinox, I've continuously been adding in new species to the game, and tried to give many of the plants and animals their own unique behaviors and effects. Even the plant species mostly have their own different purposes in the ecosystem, such as providing food, improving the biome quality, healing sick animals, calming the bees, producing fruit or providing a place for birds to nest, etc.

There were actually many more animals in Equilinox at one point during development, but I decided to cut back a bit to ensure that each animal really added some value and something unique to the game, instead of just being another generic bouncing animal with a slightly different model. There's every chance that I'll add more of these species back into the game in the future, once I've spent the time to give them interesting behaviors and characteristics.

Choosing which animals & animals to add to Equilinox 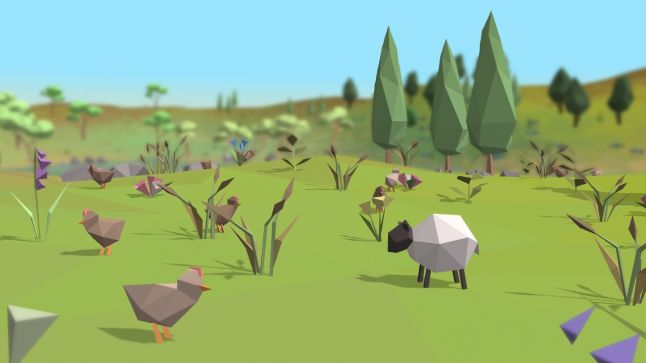 To start with, I was somewhat limited by my artistic skills. As a programmer, I don't have much experience with 3D modeling, so the first few animals I added were ones that I thought would be simple to make. The sheep was the first animal in Equilinox because I could make it using just a white blob with a few bits attached! As the project went on, I did manage to improve my low-poly modeling skills a bit and was able to add some more interesting animals.

I often chose animals based on the behaviors that I thought would be interesting to add to the game, such as the beavers that cut down trees and make dams, or bees which build hives and produce honey. As for choosing plants, it was usually either because I thought the game was lacking something, or because I'd seen a nice tree outside that I wanted to recreate! I found modeling nature to be quite relaxing, and I would often create a new plant model for fun, just to relax a bit after hours of complex programming.

When to move away from real-world animal behaviors 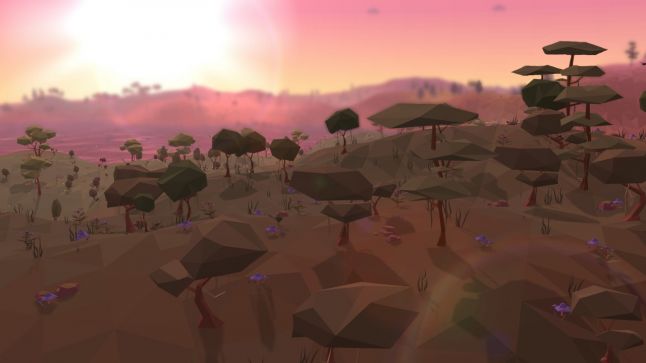 It wasn't really an intention of mine to make the game particularly educational, but if Equilinox helps to get people more interested in nature and ecosystems then all the better! A lot of the choices I made in terms of species are based on reality, although sometimes I had to make choices for gameplay reasons.

For example, in Equilinox, the bees build their beehive directly on the floor instead of in trees. This is because I wanted the beehives to take a while to be created, and most of the trees have a relatively short life length, so it would have been hard to even start producing honey before the tree died and fell down. There are various other things like this in the game where I had to favor gameplay over reality.

City-builder inspirations in a game of nature 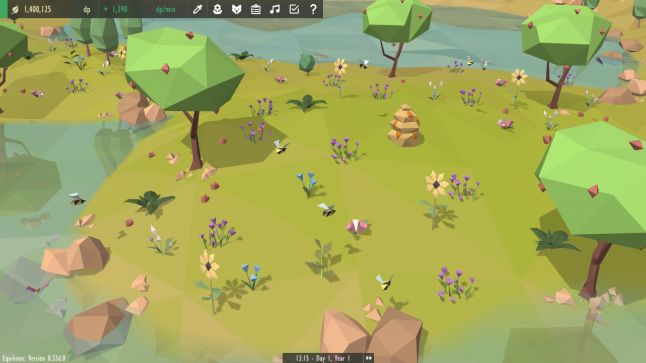 As I've already mentioned, I got quite a bit of inspiration from city-builder games. I saw how they made a game out of building and managing cities and I, to some extent, tried to apply the same concepts to creating and balancing ecosystems.

The main gameplay points that I thought people would enjoy were the world creation aspect, the balancing/managing aspect, the feeling of progression, and the simulation of nature. So, I concentrated a lot on these four things, making sure there was enough freedom and variety to allow players to be creative in making their own worlds, ensuring that there were various things to balance and manage to keep the game interesting, allowing players to progress by unlocking new species through the evolution system, and making sure that there were plenty of interesting behaviors and interactions that would make the simulation feel dynamic and engaging. 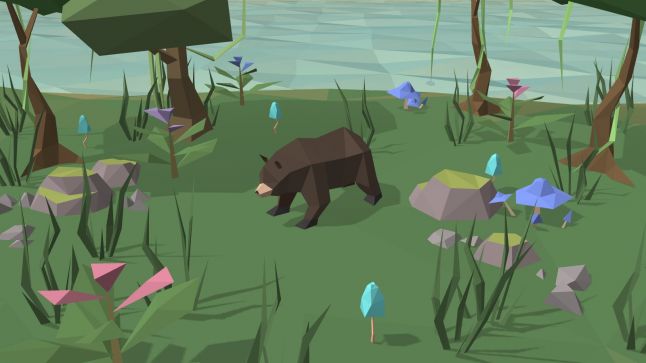 I've always wanted Equilinox to be a calm and relaxing experience - a lovely way to de-stress at the end of a busy day. It's not a fast paced game and it's not full of action; it's a simple game where you can immerse yourself in low-poly nature, enjoy the dynamic evolving world, and slowly expand your areas and shape the ecosystems to your liking. I hope that the cute art-style, quirky animations, and the peaceful sound effects and soundtrack help to make it an enjoyable and completely stress-free experience!

I think the style of game lends itself well to being a more relaxing experience. It would be quite a challenge to create a relaxing action game or first person shooter, but it's rather easier when it's a sandbox simulation/management game like Equilinox. The fact that the theme is nature also helps as I'm sure many people would associate nature with relaxation.

As I said, the sound effect and music were also meant to add to the calming feel of the game - I explained to the musician who was making the soundtrack how I wanted the music in Equilinox to be gentle, ambient, background music (almost like the sort of music one might associate with meditation), and I tried to choose natural simple sounds for the UI sound effects; nothing too electronic sounding.

The gameplay itself it meant to be pretty stress free - it's a very casual game; you don't have to have your eyes glued to the screen the whole time, no terrible disaster is going to occur and require you to suddenly react, you can go away and come back again, and there's no chance of you really losing much progress. There are also no time pressures of any sort; if you want you can just enjoy watching the birds make their nests for a while or watch the beavers as they go around collecting sticks to build their lodges. There are no punishments for not progressing fast enough.

On taking care of yourself during development 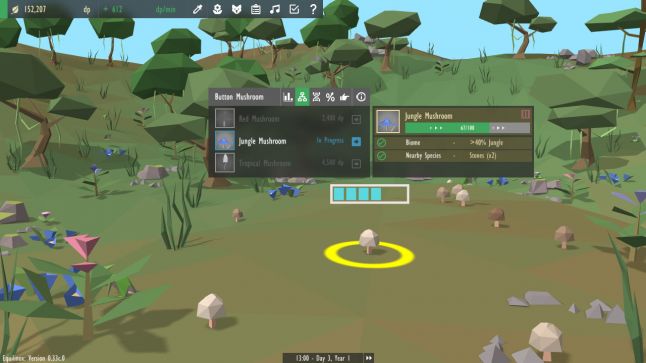 I'm extremely lucky - I love game development, it's a huge passion of mine, and I get to do it every single day, so I have nothing to complain about on that front. However, spending all day every day in front of a computer is not the best for my health or sanity, so I do ensure that I take enough breaks, get outside, and meet with friends on a regular basis.

There were times during the last years where I didn't put so much importance on this and just concentrated on making progress with the game but it would inevitably lead to a burn out, eventually. So, I do put a lot of importance into having a good work-life balance, and this is something that I also try to get across in my devlog videos that I do each week on my YouTube channel. As for staying relaxed while actually working, I tried to mix up my tasks quite a bit to keep things interesting; for example, doing coding during the morning and then 3D modeling in the afternoon. It just helped to stop me getting too bogged down or burnt out on any particular task.