Q&A: Directing the birth of a new BioWare world in Anthem

In advance of the recent Game Awards, BioWare brought in a few journalists for a quick presentation discussing the story of its upcoming cooperative RPG Anthem.

As BioWare readies to launch a major new universe, we had questions about the future of BioWare as a studio. At the meeting, game director Jon Warner and lead producer Michael Gamble made a pitch for what the game's multiplayer story experience would be like, explaining how players would be given private opportunities to advance the narrative while still going on missions with their friends.

We were able to sit down with Jon Warner to discuss the evolution and development of Anthem, and learn more about how the company is shifting into a new world of RPG design.

What about the early prototype made you want to make a co-op adventure game like Anthem?

So as a group, we wanted to go after some new challenges. We knew that we wanted to start telling stories in a more social way, and that was going beyond our previous efforts at multiplayer like Mass Effect 3 and Dragon Age: Inquisition. Right off the bat, we knew we wanted to create something that was going to be a little bit different from the start, we knew we wanted it to be a co-op experience, we wanted people to play together and be able to enjoy a BioWare setting for an extended period of time. These were the goals, the big tentpoles that drove our development.

Honestly, the first thing that really jumped out at me from our prototype was flight. We played around with it, had lots of different aspects to it, but having that feeling of being able to get to a point in the world and jump off a cliff and fly was like "oh my god, this is---this is amazing!" And then you kind of look around side to side, this is something no one else is doing either. It was magical right off the bat, our engineers, our animators, they were just eating it up. They dug it, they really dove into that challenge, and 'yeah, we can totally do this.'

When making large narrative games, how do you empower individual team members to feel like they're crafting something meaningful for the experience?

A lot of it is respect. Respect for the craft, we're all game players, we're storytellers and we tell stories in different ways. It starts from that position of respect. I want to listen to what you have to say as a developer and whether you're a 3D modeler making terrain, or you're a writer bringing these amazing characters to life, I want to hear what your opinion---you're a writer, you have an opinion about how this rifle works or this piece of gear behaves. I really want to hear about that, or about how we're casting and who we're casting. You have to start from a position of listening.

There's a good structure of peer review that goes on, so you're never really a lone voice. Sometimes somebody will come up to me and say "I had this idea, I think it should work like that." You think about that, and I try never to either adopt or discard. It's "hey let's sit down and talk about that." Sometimes there's a great reason for it, and you go "yeah that would be really cool, and we do our best to make sure that gets adopted or changed or focused whatever the case may be. 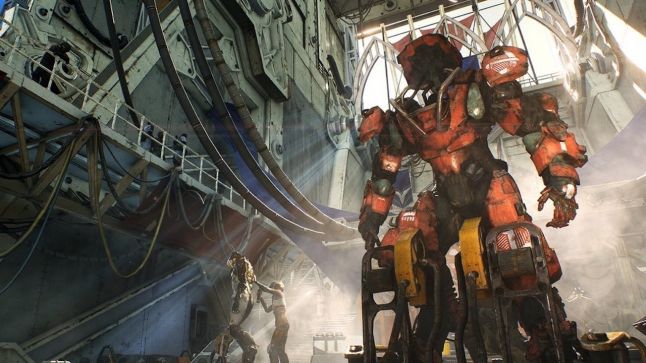 But again it has to be a conversation, where are you coming from with this feedback and what do we want out of it? Sometimes it's my job to draw the box around the sandbox and say "this is the sandbox we're playing in, and this idea is outside of the sandbox so we probably won't do it this time but maybe that's an idea for the next game." Part of it is my job to do that. That way we come to a place of understanding and agreement.

BioWare has seen a lot of notable departures in the last two years. How has that impacted your team and their morale?

It can be challenging. I think there's one aspect of that which is very personal. It's not just our coworkers, often time they're our friends. Often times you go through a lot of challenging circumstances together, you draw closer together, it's always hard to see somebody move on to that next opportunity, that next thing. I think that one of the ways that you do it is when people move on and choose to go to that next challenge. Again you're always respectful about that. It's not "oh well we didn't need him anyway" or we didn't need her anyway, it's always being respectful and saying "they chose to move on, I wish them the best of luck."

And you be genuine about it. You talk real talk with your teams and your developers. BioWare is an interesting thing because we've had such a stable base of people for such a long time. I think BioWare's actually moving towards a more normal model, where turnover is a little bit higher, but I think that's healthy in its own way, and it's normal in its own way.

You roll on. You say "here's our vision for Anthem, we still believe in it, we feel strong, and players who get their hands on it are believing in it too, and we want you to stay here and make something amazing with us."

How is BioWare thinking about reducing player toxicity at the design level when making an online action adventure RPG?

We definitely don't want to have a culture of toxicity with our players, obviously. Doing things like allowing missions to be followed without voice communication, so everyone understands what you're supposed to do without having tight coordination with strangers--that's one important thing that just from a tactical point of view we do. 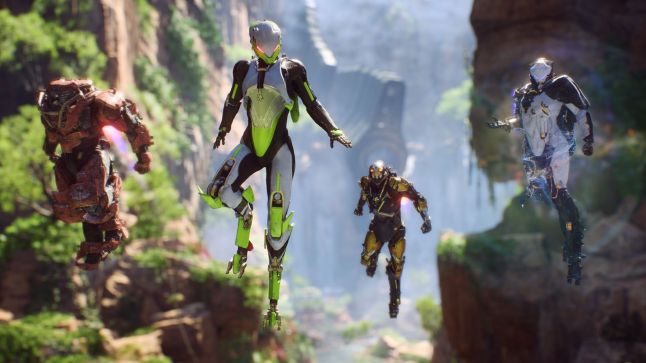 The other thing is, we have a great team down in Austin that's been running Star Wars: The Old Republic for a long time and they've developed a really good set of tools to work with the community and foster good practices and discourage bad practices, and I think we just have to be vocal and transparent about what type of behavior is tolerated and what isn't.

During the presentation, producer Michael Gamble mentioned knowing that not having pre-existing social game groups is a friction point for getting into games like Anthem. Can you elaborate on how you're designing around that?

I think, especially for me, I'll speak personally about this for a moment. I'm at a point in my life where I'm not always able to coordinate with friends for a long period of time. "We're going to carve out three hours to do this thing together, and we have to coordinate our schedules to get that done." I would much rather be able to go after really challenging content with other players who are trying to do the same thing, and let the software bring us together.

That was kind of the general feeling behind that, let's not cordon off our best content or our most challenging content in a way a lot of people can't get to it. Instead, let's encourage people to be able to get together, go after a challenge, and if they start to become acquaintances they become friends, hey that's awesome, that's great, but let's let that happen, let's let it happen, let's see what the players need.

A lot of it, having developed Anthem, I feel this acutely, you want your players to have the best personal experience. Well if we let you jump in here with a bunch of random people and you're not really communicating, you might really struggle. But I think you have to respect your players and allow them to try.

You've been transparent that a lot of classic BioWare design pillars, like branching romances, aren't returning. What would you say is replacing that content in an experience like Anthem?

I think those moments are actually still very much there, and it's the final expression of that friendship or that relationship that is the thing that's changed. One of my particular favorite moments in the game is near the end of the critical path is a moment where you sit down with Faye and you discuss where you're at, and it's this quiet thing in the back of the fort, and it feels so intensely personal.

And by switching over to first-person camera for our conversations, you actually are able to make eye contact with her, and it's this amazing connection that happens. It is about that friendship and that comraderies, and those moments are still absolutely there, there are moments like that with Owen, with Haluk, it moves me. I think it will move our players. I think that just understanding "hey, this is a game with a story that is about comradeship and friendship, that's where it goes."

There's been a huge conversation this year in games about work/life balance and the nature of crunch in the workplace. Was there any crunching on Anthem, and if so, how do you think you could have done better on it?

The postmortem on these things, there's always things you wish you could have done better. I think people's experience with working overtime is going to vary from person to person. I can only speak for myself. I think for me, it's been a challenging project but it hasn't been crushing. I always said to the team from the very early days, "at the end of this project we are all going to be tired, but we won't be broken." That's kind of the philosophy that we approached it with. I think that as an industry it's a challenge we are all facing, and we need to be open-eyed and transparent about it.

As game director, you have authority over the people who have to do that extra work. How do you approach that moment when you need to ask team members to stay late as a deadline approaches?

Yeah, sure, that is [a moment to wrestle over], it is. You look at it and go "oh, boy, we gotta do this," but...I always try to err on the side of the person as much as I can, and whether I've been successful at that all the time, I don't know. Because at the end of the day, the talented people who work at BioWare are what makes this whole thing go. I try to contribute to that, I try to lead them and guide them as best as I can, and I try to make sure they're taking care of themselves as best as they can. Sometimes when you're so passionate about a thing, sometimes it becomes easy to lose yourself in it, sometimes you have to step in and say "hey, it's a marathon, it's not a sprint."

What's your advice for other game devs involved in storytelling in multiplayer settings?

You have to think about the group, the collective at every step. I think that we have developed a lot of muscle memory in how we we tell stories to individuals, and you have to do a little bit of flexing and stretching to tell a story to a group of people. The difference may seem subtle but it's not, I would just say be mindful of that. And it'll lead you to good places.

And it seems like a simple thing. Often again it's that muscle memory as storytellers that wants to pull you back into that place, and just reminding yourself that you're talking to a group of heroes, not a singular hero.