Enthusiastic independent developer and Xbox Live Indie Games repeat offender Nathan Fouts comes back with a postmortem of Explosionade, a game conceived to be developed in one month to help with cash flow for his studio's efforts in developing larger titles.
Nathan Fouts
Blogger
January 05, 2011

[Enthusiastic independent developer and Xbox Live Indie Games repeat offender Nathan Fouts (Weapon Of Choice) comes back with a postmortem of Explosionade, a game conceived to be developed in one month to help with cash flow for his studio's efforts in developing larger titles.]

Explosionade, released October 7 for Xbox Live Indie Games, was experimental for Mommy's Best Games in a lot of ways, not the least of which was "just how quickly can we make a great game".

Development started on August 26th, and the original (internal) launch date of September 25 was set to get an initial sales surge on the books for third quarter of 2010.

We missed that goal, didn't make as much money in third quarter as needed, but managed to stay in business full-time through painful but artful money-shifting. The good news is the game turned out better!

In a theme throughout the What Went Right section, design direction on Explosionade was like a laser-knife cutting through butter, under a microscope, conducted by Cyberdyne.

That is to say, while the actual game ideas may have fluctuated between brilliant and dim, there was no lolly-gagging during actual development. 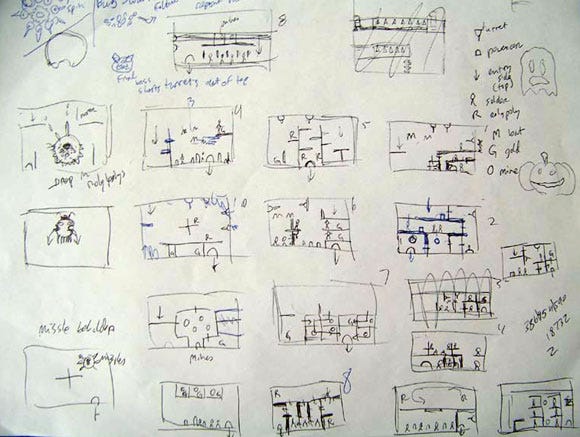 Various level designs trying to create as much variety as possible.

I picked the design by mashing together several other designs of mine. I had plenty of ideas waiting around; it was a matter of picking something I knew could be fun, but also something doable, and within a small scope. Everything about the design was created to be reusable but still enjoyable and feel original.

The core idea of "invading tiny alien bases" drove everything from the design of intricate paths the player could take, to the mocking laugh animation the soldiers had when they managed to damage the player mech. If something did not fit this concept, it was cut. Immediately. Each piece had a purpose and we had no time for exploring frivolities. (Trust me, I like late-night, exploratory coding frivolities as much as the next developer, this just wasn't the time.)

XNA was used to write the game and DarkBASIC was used to create the level editor. Both languages are well-suited for extremely fast prototyping. Richard Rosenthal, our current intern, knows DarkBASIC like some mystical coding wizard, and while I have no working of the language or IDE, it seemed to produce quixotic code, yet tangible and quality final results.

My original idea was to create "in-code" levels just like I did for Shoot 1UP, but since there was massive amounts more level collision in Explosionade it just made more sense to create a level editor. Fortunately Richard already had experience creating graphical editors before and was able to whip up something in DarkBASIC in literally a weekend.

I've written before about the amazing results one can derive from XNA for both Xbox 360 and PC. It bears repeating that all the robust, well-designed code libraries supported again made it possible to deliver a sweet-playing and -looking game to the home console with very little fuss. 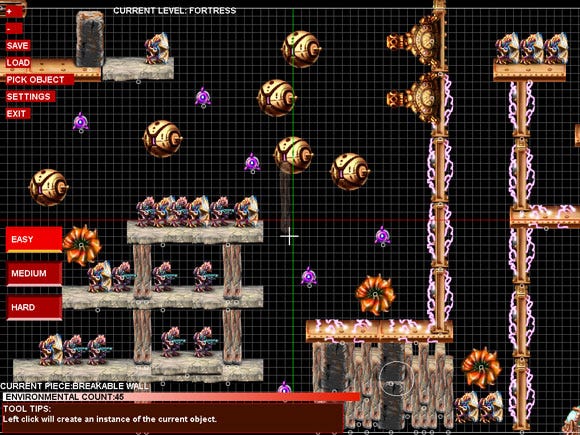 Starting and finishing a game is tough even for those who've done it many times, but starting a game completely from scratch is truly a Herculean task that often needs not happen. Shoot 1UP was built on an XNA game starter kit, and Explosionade was built upon Shoot 1UP.

New sprite animation techniques and coding voodoo were further honed for Explosionade which made for massive amounts of polish and detail in a super-short amount of time. From collision, to player handling, to sprite libraries, having an entire game already built accelerated development as much as I could hope for. Special care was taken to make the gameplay feel very different in every way, but things that worked such as gameplay speed adjustments for players, and button remapping, were kept.

The peer-to-peer leaderboards in Explosionade were the fruit of Spyn Doctor Games (Johannes Hubert) and his near drag-and-drop library gave us an effective leg up here as well. 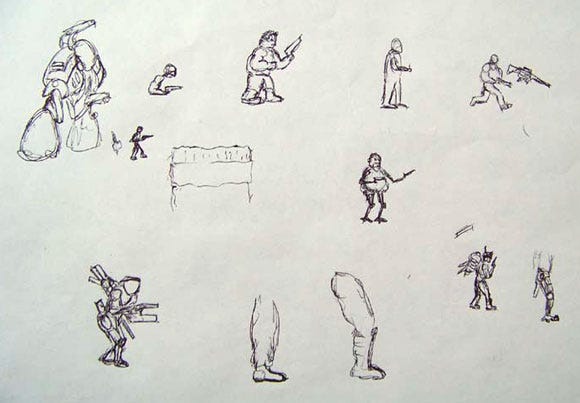 Early mech and player concepts. At one point the character was going to be human with a jetpack.

Explosionade was in XNA AppHub's playtest forums for several weeks before release and it benefited greatly from a wide swath of player feedback. It was difficult actually incorporating the feedback even though some things didn't always interest me.

It's always a challenge trying to balance responsive gameplay and character "feel" in a mech game. The original walk animation of the mech was very jerky and heavy feeling.

During the earliest playtest of the mech walk animation, while I liked the style, many testers hated it. One even went so far as explain it wasn't how a "real" mech would move.

The final speed of the mech still turns some people off, but I had to strike a balance somewhere as I didn't want the half-ton machine able to jump around like a normal human.

I tried to mitigate moving slower with the ability to "shield jump", which turned out to be one of the highlight mechanics of the game! 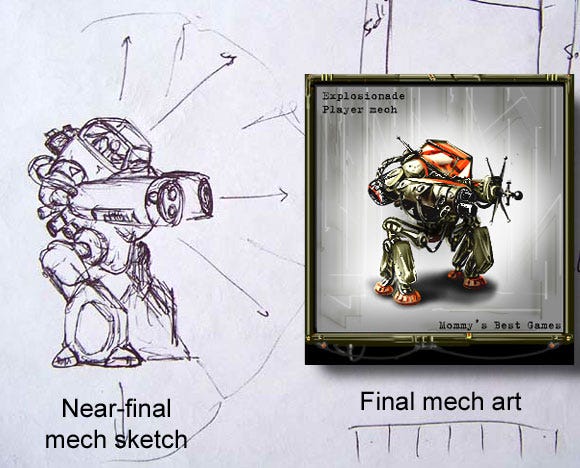 Getting closer to the final mech design.

Explosionade was targeted to release on September 25th. I had everything in-line for that date, but when an edge-case crash bug was found, I pulled the game from peer review immediately.

This in turn added another eight days to development, in which time we added a new story ending (there's two endings total), a true final boss, a power-up (the Meganade Cascade), and the shield soldier type. Obviously this beefed the game up significantly. Even with a "small" game, extra time really helps.

When you're trying to finish a game in a month, one of the first things that can go is variety. While we did manage two different soldier types (the shield Horronyms can bounce your lasers and are more aggressive), overall, people wanted more enemies and more levels. This was simply a matter of time, and not being able to fit in lots of variations or new types into the game. It was a calculated move to try to finish a whole game quickly. Many reviews and gamers weren't bothered as much by it but probably just as many were turned off by the lack of environmental variety. 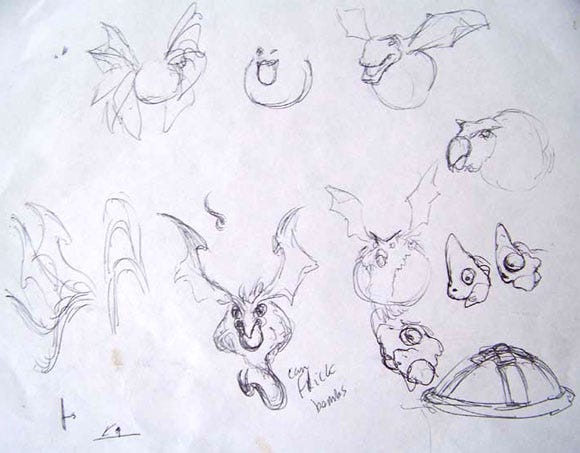 Sketches for the SnakeBat, Horronym soldier faces, and the power core (the level exit).

There have been very few console, run-jump-and-shoot dual stick shooters (our own Weapon of Choice comes to mind as does Gastronaut's Small Arms). With Metal Slug and Cybernator firmly on my mind as some of Explosionade's influences, I wanted to cater to the older, arcade-savvy crowd.

Originally move and look was on the left stick and shoot was on the X button. But the more gamers playtested, the more they wanted a Right Stick fire option. I added this but now the jump dilemma surfaced. Where does jump go when you have a dual stick shooter?

I had several complaints for Weapon of Choice putting jump on the Left Trigger though that still seems the obvious choice for me. In the end, Explosionade defaulted to jump to the A button as an experiment, and the game provided full button remappability to make sure gamers could choose their preferred option..

Plenty of people still complained about jump on the face buttons, but then were happy with the remapping abilities. I think next time I'll try duplicating jump on the trigger and face buttons. 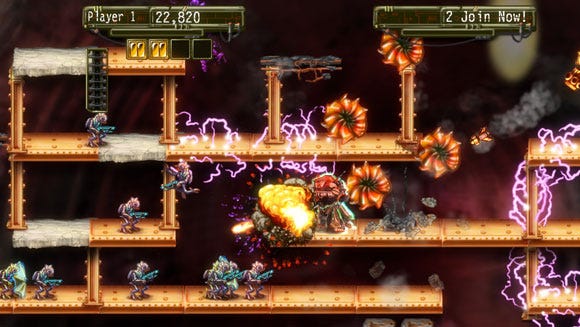 Explosionade gamplay, zoomed in view of the later, electrified levels. 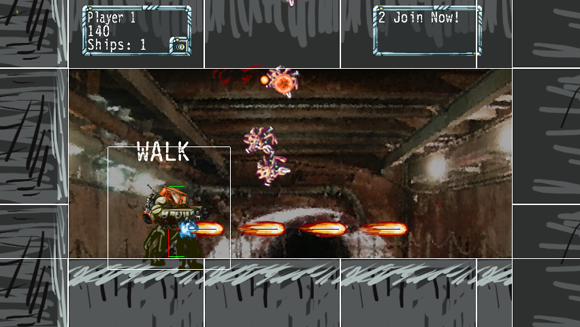 Very early screenshot of Explosionade back when it was called "Take the Base". Check out the pink Shoot 1UP enemy fighter!

I wanted to make sure as many people as possible beat Explosionade. That worked out pretty well as a lot of them enjoyed the funny story, and played through to the end. But many also complained that the game was too easy, even on "Serious" difficulty.

I also believe while the conversion rate is good from trials to sales (27 percent), it could definitely be higher still. I think some of this has to do with the difficulty ramp in the trial.

If a few of the first 10 levels could convey a very chaotic feel, rather than ramping up so smoothly through all the enemy types, it would have reached the hardcore audience more effectively. Try to get as much variety from the later levels into your trial experience -- don't assume people will look at screenshots.

The design of Explosionade, letting you play full-screen or zoomed in, and in large-but-still-single-screen-challenge-rooms is not exactly standard. Balancing the look of the game, and gamers' expectations, was difficult. Many expected it to play in a longer-level, side-scroller fashion -- probably more like Contra or Cybernator. I had good number of gamers seem lukewarm because the game was not a "proper" side-scroller (though it scrolls when you zoom in).

It's difficult to address but unavoidable that gamers' expectations will color their impressions even if they end up actually enjoying your game. 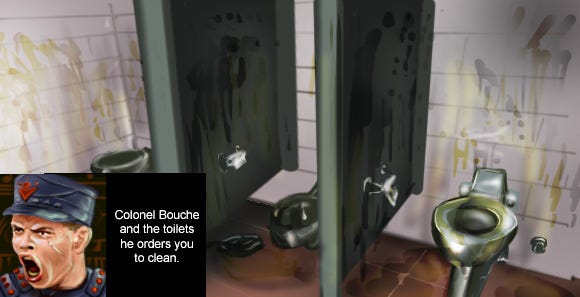 The gaming press is busy. And they have lead times for articles. And I think there's an inherent tolerance of "how popular is your game versus how often can we stand to talk about it". I see that as no fault of the press; it's just something to keep in mind.

By September 20th, I had something attractive enough to show the press, yet I ended up launching only a few weeks later. Three weeks is a terrible way for an Indie Game to build hype. If at all possible, give yourself at least two months -- though three months is probably optimal (or more of course).

As it stood, a lot of sites covered the announcement; some covered the dashboard issues, but not as many covered the actual launch. I think this is a mix of being busy, some disinterest, and also "already covered a small game too recently". It's very important to "plan and date" your stories for the press with your game coverage. Keep their schedules, and big game launches, in mind. 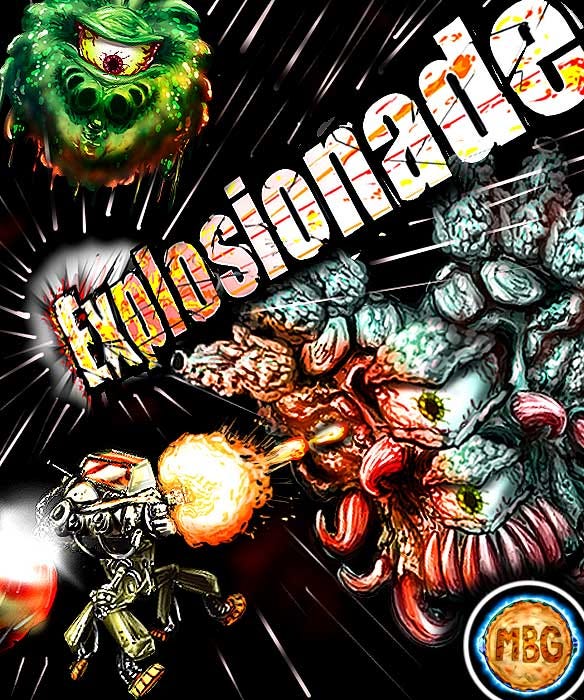 When Life Gives You Explosions...

Overall Explosionade came out waaaaaaaaaay better than I expected. That's probably a mix of the art style jiving well, my intern Richard kicking complete butt with an awesome editor, AJ writing a very funny story, and some lucky design inspiration like the shield jump.

Though the difficulty is low I still enjoy the "experience" you get when playing through on a single sitting. I consider Atticus and Colonel Bouche great characters, the mech fun to play, and I plan to expand on the Explosionade universe soon!

Best late night quote: "Can we take out the one that rapes you all around the edges?" (Referring to a roly bug that rolls around the level edge, and eventually tracks you down.)

For any unanswered questions, just fire away in the comments or email me directly!