Usability and user experience studio Vertical Slice and developer Relentless Software have collaborated on a study to discover what it is that turns friends against each other in games, through understanding how player types affect the forms of social interaction.
Game Developer
Staff
January 24, 2012

[Usability and user experience studio Vertical Slice and developer Relentless Software have collaborated on a study to discover what it is that turns friends against each other in games, through understanding how player types affect the forms of social interaction found in collocated (same room) multiplayer games and what this means for developers.]

Why is Social Interaction Important?

Social interaction is becoming an increasingly important theme in multiplayer gaming. The success of the Wii, and its focus on casual multiplayer games such as Wii Sports or Just Dance, has highlighted how important playing with friends is to reaching wider audiences and creating successful game experiences.

For developers, it's therefore important to be able to understand the types of social interaction that exist, and measure them during the development of games. In a collaboration between Relentless Software and Vertical Slice, we have been developing a methodology to allow developers to evaluate interaction from the very earliest prototypes.

In order to measure social interaction, it is first important to define the types of interaction that occur during multiplayer collocated (i.e. sat in the same room) gaming.

Voida, Carpendale, and Greenberg, in their paper The Individual and the Group in Console Gaming, observed people playing multiplayer social games such as Guitar Hero, Mario Party and Mario Kart. By noting and defining the forms of behavior evident in these sessions, they categorized interaction into six groups, presented below. Ackermann also conducted a study, coding and analyzing the forms of interaction noted by players at LAN parties, and noted similar interaction categories.

By combining their research with data from previous Relentless Software usability tests, the following categories of interaction were defined:

Bart Stewart recently discussed the use of models for player types, and noted that the most popular model from Bartle divides players into four types, as follows. We have also used the same idea of player types as a way to distinguish between each player's individual motivations.

In Bartle's theory, each individual player's motivation stretches across each group, with a player being scored in each category, i.e. 80 percent killer, 10 percent socializer, 10 percent achiever.

For this study, the online Bartle Test was utilized, which asks the user 30 questions, before giving them a Bartle player type. For analysis of the results, we divided players by their type.

The players were picked from pre-existing social groups to encourage interaction. Pairs of players were asked to play a game of Buzz! Quiz World, the social quiz game created by Relentless Software.

During these sessions, a custom tool, created in Processing, was used to record the forms of social interaction noted, and automatically timestamp the data for further analysis.

Throughout the session GSR (galvanic skin response) data was taken, measuring how their body reacted to the in-game events and the forms of social interaction noted.

GSR has a linear correlation with arousal (such as excitement or frustration) and reflects non-specific emotional response. The GSR data was presented on a timeline, and was later correlated with the social interaction data.

After the session, players were asked to record their experience on blank graph paper, and annotate this. This was done unprompted, before interviewing the players, to ensure that a fair representation of their memories of the session, and the events/interaction that occurred during it, could be evaluated. 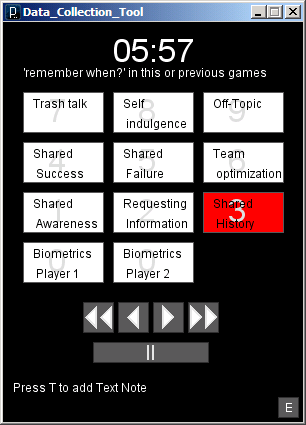 What Did We Find?

As mentioned, we broke the results down by the four player types, to gain greater insight into the motivations behind each form of interaction noted.

Killers, who as we noted are most interested in defeating other players, showed the highest degree of the "trash talk" behavior, insulting and goading their opponent.

It was also interesting to note that Killers' levels of arousal, as identified by GSR, and social interaction, dropped significantly when it was obvious they were going to win -- they are only interested in "worthy" opponents, as was confirmed later by the interviews.

A Killer's self assessed "experience" graph

Their desire for defeating other players could be realized and emphasized in game through the introduction of taunt mechanics in games, as are found in many fighters.

Game mechanics can be introduced to ensure continued engagement by ensuring that all players always have the opportunity to win. This has previously been seen through the rubber banding in games such as Mario Kart, or the final round of Buzz! Quiz World, which converts the score players have earned throughout the game into a head start in the last round.

Achievers, who are defined by their interest in visibly demonstrating their success at a game, showed the highest level of interaction and arousal when the game displayed a visible indication of their progress.

In Buzz! Quiz World, this was noted particularly for the Pie Fight round, where the players received a pie in the face for an incorrect answer, and in the Over the Edge round, which raised players who were doing badly towards a sludge tank.

In their interactions, it was also noted that achievers were prepared to give up their advantage to verbally demonstrate that they knew the answer.

In trivia games like Buzz! there is an advantage if your opponent doesn't know the right answer; however, achievers were noted to say their answers out loud while answering, demonstrating their superior knowledge, at the cost of in-game success. Evidently prestige is more important than the game's defined objectives.

Achievers described how they'd like further rewards in game, as demonstrated by comments that they'd like the audience to chant their name in-game.

As such, a game can be tailored towards encouraging interaction from achievers by offering the opportunity to visibly display success in each round against their opponent, not just through badges and trophies, but through in-game mechanics, such as stats and support! 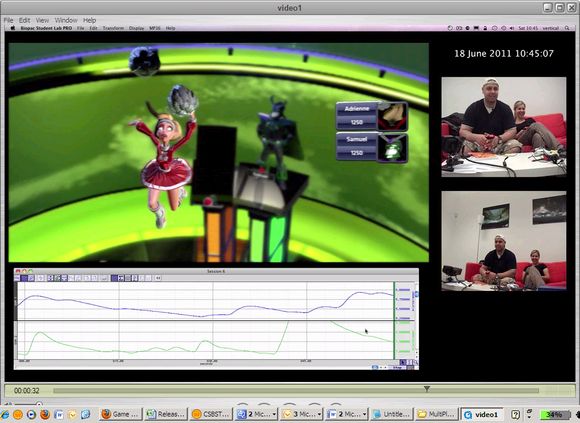 A player falling towards the sludge in Over The Edge, with a visible peak in the Achiever's GSR signal (green)

Among socializers, it was noted that their interaction was primarily collaborative. Socializers would work together with their opponent, and discuss the choice of rounds to ensure that they both shared enjoyment in the game session, whereas other player types often chose categories their opponent would perform poorly in.

Socializers demonstrated the high degree of "shared awareness" verbal interactions, and discussed the answers. Unlike achievers, this interaction was collaborative and involved two players working out the correct answer to the questions together. It was also noted that socializers were uninterested in the progress of the game, and showed a low level of GSR arousal to in-game events, compared to other player types.

Due to the high level of arousal noted when socializers talked to one another, the recommendation can be made to emphasize communication between the players, even in typically competitive gameplay, to ensure that they remain engaged in the game. This can be achieved through development of plot or the use of humor.

Explorers, who are defined by their interest in exploring and understanding the breadth and depth of the game and its mechanics, also demonstrated a high level of cooperative interaction -- and, like socializers, worked together with other players while describing what was happening in the game.

They showed the highest level of interaction when engaged by new challenges, such as selecting the topic for a new round, discovering the mechanics of the round, or being asked new questions. Explorers also demonstrated a high level of interest in the visual aspects of the game, such as describing what their in-game avatars were doing at the time. Like socializers, they were not engaged by Buzz!'s overt success goals, and a explorer even said "I'm not interested if I win or lose."

When targeting games towards explorers, it is important to display a wide variety in content, both in the game mechanics and graphically. Minigame collections, such as WarioWare and Mario Party are good examples of games that encourage social interaction from explorers.

It is important to recognize in the recommendations for all player types that optimizing a game towards one player type may create a detrimental experience for other types, and hence it will be important for the design team to evaluate the results of this method against their development goals.

Developed in partnership with Relentless Software, the methodology for live-coding the forms of social interaction that occur during gameplay allows great insight into precisely what elements of a game cause reactions with players. The application of this methodology during development can allow designers to tailor a game towards emphasizing specific forms of interaction, or targeting specific player types.

This study has shown how the forms of social interaction differ for each player type in the social trivia game Buzz! Quiz World, from the taunting of highly competitive killers, the boasting of achievers, or the collaborative discussion of socializers. The application of this to different game types, from FPSs to RPGs, would reveal interesting distinct traits in the interactions found among each player type in response to more directly competitive play. There is also potential to explore how social interaction changes among larger groups of players.

Voida, A, S Carpendale, and S. Greenberg. "The Individual and the Group in Console Gaming." CSCW '10 Proceedings of the 2010 ACM conference on Computer supported cooperative work, 2010