Opinion: What can we learn from that tone-deaf 'Slave Tetris' minigame?

After a few days of deserved social media furor the now infamous “slave Tetris” minigame has been removed from Serious Games’ Playing History 2 - Slave Trade, and not a moment too soon. The whole game is a dismal, tone deaf failure at education that highlights something critical about the power of video games: they can either deepen our understanding of difficult subjects or trivialize them. The slave Tetris minigame was merely the most glaringly obvious failure here.

“Travel back in time and witness the horror of the slave trade first hand,” promises the description on the game’s Steam page, a pledge that seems oddly disjointed against the bright colors, wide smiles, and cartoon characters populating the game. The gameplay itself features bizarrely jaunty dialogue that feels like a nightmarish episode of Sesame Street, puppet-like slavemasters chirpily describing to your character, a young slave, how you were stolen away from your home.

It is worth taking a deep dive into some gaming theory to understand what’s going wrong here and what causes the nameless revulsion this clash of themes doubtlessly summons up.

Critic Lana Polansky spoke recently about the concept of “incoherence,” as a substitute for the mouthful “ludonarrative dissonance,” which might have been used to describe the odd nature Playing History 2 - Slave Trade, with its serious theme clashing against its pastel renderings.  Dissonance, she argued, can be used deliberately and well to create an additional channel of communication between the game and the player; sometimes dissonance could be a good thing, and a game could be dissonant and logically coherent.


“Poorly-applied film edits, instruments which are badly out of tune, or experimental grammar in a poem which renders is illegible, are all ways where 'dissonance' can fall flat. However, a piece of aleatory music can create incredibly dissonant sounds, clashing non-harmonies, a mess of competing rhythms, and so on. But if the conditions of the piece are set to create exactly that kind of experience with purpose, then the dissonance can’t really be said to be an unconscious accident or inherent flaw. (Although dissonance can be both deliberate and badly done!) This is just as true for punk rock, tone poetry, the painting of Francis Bacon, the music of Death Grips, and so on.” 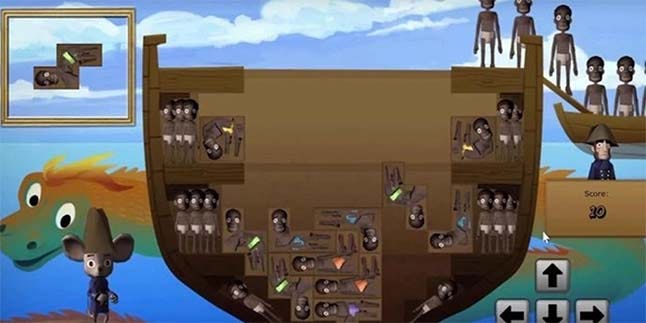 For Polansky the distinction she draws between dissonance and incoherence is crucial because it gives us language to describe the difference between a game that consciously uses dissonance to achieve certain effects, and an utterly inchoate logic that causes a game to fundamentally fail as an act of communication and an immersive experience. Playing History 2 - Slave Trade falls squarely into the latter category. Her thoughts on Bioshock: Infinite could easily apply here: “The issue is not so much that these problems clash particularly noticeably in the moment of play in such a way that jars and therefore leaves an impression on the player. It’s that, under scrutiny, they don’t make any sense to what the game and its various elements are trying to accomplish,” (emphasis mine).

Educational games (often grouped under the noxious portmanteau “edutainment”) have been a white whale for decades, embroiled in a struggle to sprinkle “boring” schoolwork with the faerie dust of video games. Though many of us may fondly remember games like Math Blaster, Where in Time is Carmen Sandiego? and, of course, The Oregon Trail, it has been a struggle for developers to make an educational game that is both fun and genuinely informative, at least deliberately. I think, like most gamers, I can claim to have learned quite a lot from putatively non-educational video games simply because they were not, often, condescending to me with neverending anxiety about the inherent attractiveness of their subject matter.

"The problems mount dramatically when one gets to teaching about the many periods of human history that make even the hardest stomach turn. How do you teach children about war, slavery, oppression, and devastation in a video game?"

The problems mount dramatically when one gets to teaching about the many periods of human history that make even the hardest stomach turn. How do you teach children about war, slavery, oppression, and devastation in a video game? There are a number of ways to go about this, of course, and the way is shown by adventure games and the much-maligned “walking simulator” genre. Imagine a game about a young 21st century woman who is a scholar and researcher; she is charged with researching the origins of a particular family; over the course of her investigations, she uncovers letters, documents, woodcarvings, drawings, pictures, and so on that piece together a complex and terrifying history.

Games give us immersive tools, allowing us to craft worlds where objects are tactile and tell their own story. Even the spectacularly well-crafted Tomb Raider reboot managed this, with Lara coming across numerous artifacts and letters that told stories stretching back centuries about Yamatai, the island she was trapped on. You as the player could look all the way around an object in three dimensions, and were rewarded for doing so. Tantalizing hints were sometimes hidden out of the default view. In every case, this plethora of artifacts not only reinforced the conceit of the Tomb Raider franchise (i.e. Lara being a skilled archeologist who recovers treasures), but also provided an avenue for characterization and story in an action-packed game.

In short, the equipment is there to tell this story, and the backlash against Playing History 2 - Slave Trade should not be interpreted as a call to avoid frightening parts of our history in playing video games. No doubt this backlash will be interpreted by some as “proof” that developers should avoid sensitive topics because one can supposedly do nothing right--certainly Serious Games’ CEO Simon Egenfeldt-Nielsen feels this way. “I have reached the conclusion that no matter what we had done it would have been wrong,” he told Kotaku. Egenfeldt-Nielsen also lashed out at what he saw as the sensitivity of his critics  calling them “sheep,” and, naturally, blamed differences between American and Danish culture for what he saw as a misunderstanding:


“[A] lot of the tweeters say a stupid white Dane like me don’t know anything, and shouldn’t be allowed to say a single word about the story of African-Americans.”

But it would be a shame if such a staggeringly bad example as Slave Trade was used in this way, as a scapegoat for avoiding hard topics in the future.

The game was, at bottom, terribly incoherent. It mixed a serious topic with a sunny atmosphere and gamey elements that trivialized that topic rather than illuminated it. The Tetris minigame, further, has the stunning side effect of rendering the player complicit in creating one of the signature atrocities of the slave trade: heinously overcrowded ships. All as a smiling sea dragon looks on. Egenfeldt-Nielsen strained to point out that the protagonist, the young slave you play as throughout the game, liberates himself over the course of the story; this is, undoubtedly, a good story to tell, but we return to the incoherence issue: the game’s portrayal of slavery is at war with its lesson about slavery’s unbearable atrociousness.

Truth be told, such tone-deafness should be easy to avoid. But we should remember that games also have plenty of ways to tell a coherent and interesting story about even the ugliest parts of our shared history, and in ways that schoolchildren might find interesting if only we did not condescend to them by thinking bright colors, smiles, and homages to 80s games were needed to engage them.