Opinion: Prejudice as a game mechanic

The label 'empathy games' is associated with indie titles like Dys4ia to Cibele. But it may also apply to AAA titles like Dragon Age: Inquisition and the forthcoming Mafia III.
Game Developer
Staff
February 02, 2016

One of the most intriguing (and timely) features of Hangar 13’s forthcoming Mafia III, a sprawling open world crime game set in a 1968 New Orleans-stand in, is that it promises to accurately represent the experience of being a black man in the 1960s South through the game’s protagonist, the biracial veteran Lincoln Clay.

Studio head and creative director Haden Blackman said this on the matter in an interview with Game Informer’s Ben Reeves in November:

“Our end goal is to tell an authentic story and put you in a role that maybe you haven't been before,” Blackman says. “That's the beauty of games, right? Games can immerse you in these roles and identities that you would never be able to experience in real life, in ways that movies and novels can't because you are making decisions and you are that character. You are inhabiting that character. We wanted to take advantage of that and put you in a role of a character that very few of us will have been or will be able to be. Being someone who is viewed as black in 1968 in the South is unique.”

It’s an admirable sentiment. The game, which features GTA style police-avoidance mechanics, has amped them up to reflect the real terror of being black in America while interacting with the police. Officers shoot to kill, will harass Clay if he’s walking through wealthier, white neighborhoods, and profile him. It not only adds an interesting layer of complexity and challenge to the experience of play but (depending on how successful its execution is) could be a landmark for creating a AAA-level ludic experience of racism in the United States.

It’s encouraging to see developers thinking about this in the first place because, as Blackman suggests, it opens up a wealth of experience through gameplay and poses new and unfamiliar challenges to players of all backgrounds. 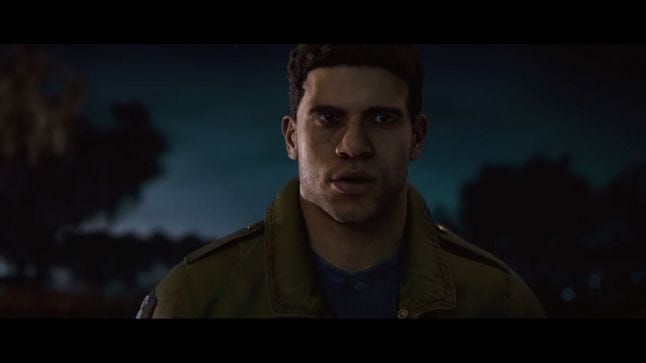 So-called “empathy games,” games which allow a player to experience the subjectivity of a marginalized identity, are better known in the indie scene (even if the term is increasingly scorned there for how it ghettoizes such games). From Mattie Brice’s Mainichi to Anna Anthropy’s Dys4ia to Star Maid Games’ Cibele, we have plenty of examples of games that immerse you in the subjectified character of someone whose identity is not usually explored in depth by games. In the process, its mechanics--how the games compel you to interact with the ludic environment--surface a lived reality that players may otherwise not have access to; they render through gameplay what it feels like to be a black transgender woman, or a teenage girl in an online game, for instance.

As ever, such games point the way to undiscovered countries in game design, and it’s encouraging to see more mainstream developers begin to explore that territory with their more lavish tools.

Mafia III is yet to be released, but Bioware’s Dragon Age: Inquisition contains a chapter that provides an interesting proof of concept for AAA developers who want to try their hand at modeling structural prejudice.

Lest the jargon scare you off, what do I mean by “structural prejudice”? For our purposes, it stands in contrast to individual prejudice; for instance, calling someone by a slur. Structural prejudice creates a system in which a marginalized person’s behavior is hemmed in by narrowed choices and, to use a popular gaming metaphor, a higher overall difficulty-setting. It isn’t just comprised of individuals saying cruel things to you, but rather an entire environment where such beliefs hinder one’s very life in material, definable ways.

In Dragon Age: Inquisition about two thirds of the way through the story you take on a mostly non-combat quest, “Wicked Eyes and Wicked Hearts,” which sees your party attend a grand masquerade ball at the Orlesian Empress’ Winter Palace in order to stop a mysterious assassination plot against her.

Any effort to simply charge in and tell her she’s in danger--a fact she is already aware of--is rebuffed forcefully. Retreat from this party, which is also hosting a vital peace conference in the long-running Orlesian Civil War, is impossible. Instead, you must more delicately explore the high society gala for clues as to what’s really going on here. You contend, then, with a “Court Approval” meter for the duration of this lengthy quest, which models your overall acceptance among Orlais’ gathered elite; it goes up and down based on your behaviors throughout the quest, but also as a result of your very identity. It is through this relatively simple mechanic that Bioware manages to express a great deal about both its lore and the nature of prejudice.

If your Inquisitor is a human warrior or rogue, you begin with the highest possible court approval level. But if you are a mage--a member of a class held in great suspicion and fear in Thedas--you start with a lower level. Even moreso if you play as an Elf or Dwarf, and you lose the most points right off if you play as one of the tall, horned Qunari. As the quest starts, then, racial discrimination becomes palpable in the mechanics.

In my last game I played as an Elf, a member of a race that primarily lives in segregated slums throughout the human world and who mostly occupy the role of servants and working class and I felt a great deal of pressure to overcome the Approval deficit that I did not have on my human noblewoman warrior, who better fit the Orlesian nobility’s expectation of who the Inquisitor should be.

There are many opportunities to increase your approval, of course, and so long as you know where they all are and what dialogue options or actions to undertake to acquire them, even a Qunari can end the quest with 100 approval with relative ease. But that’s the point. As a non-Mage human, you have more flexibility to make mistakes or skirt past approval-gain opportunities. You don’t need to get everything right in order to have enough approval to get an ideal ending for this quest--which, among other things determines whether you are believed when you ultimately accuse the would-be assassin in front of the entire Court. 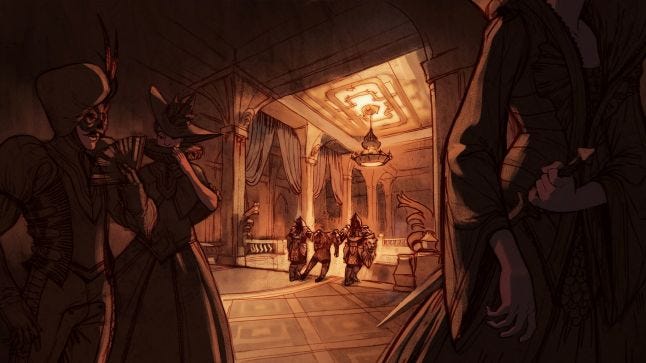 As an Elf, I felt I was living the maxim of “you have to work twice as hard to be seen as half as good.” That deficit at the start of the quest meant I had less room for error. My character had to perform perfectly in the eyes of the nobility, a mirror of expectations I felt growing up working class and Latina and being suddenly thrust into an environment of privilege; nothing less than perfectly mastering this world of unfamiliar social cues and excelling at everything I did would have prevented me from being immediately pegged as a stereotype and an “affirmative action” student.

Bioware’s system is imperfect, very simple and relatively easy to game if you have the Wiki to hand. But the masquerade ball demonstrated very clearly what it meant to be an Elf in Thedas; in addition to the approval hits, many guests treat you like you’re part of the wait staff for instance, a common enough experience for blacks and Latinos in parallel real world scenarios.

It’s a start, and despite its relative simplicity, Bioware’s Court Approval mechanic helped make for one of the most interesting and unique quests in the game, modeling a non-combat challenge to boot. While there are a few moments throughout the long quest where fighting is inevitable, the vast majority of it is non-combat, pseudo-stealth and exploration, with dialogue being your primary weapon. Knowing what to say and when to say it is key to surviving the quest, which also nicely models all the lore Bioware built up around the courtly Orlesian nobility.

“Wicked Eyes and Wicked Hearts” presents you with a quest that you can theoretically fail if you don’t combat and adjust yourself to prejudice against your character’s race, ultimately costing the Empress her life. Even as you’re on a mission to literally save the world, you have to contend with the petty and irrational hatreds of those around you, and it can have a real impact on your goals if you don’t properly engage with it. That is what I mean by “structural prejudice.”

When you try to model such social challenges, doors are opened to that elusive property of games known as “originality” and everyone benefits. It might be worth a try in your next game.