Instruction manuals for video games are seen as less of a necessity these days, but they still can give a game a bit more soul, even today. Katherine Cross explains.
Game Developer
Staff
May 14, 2015

Instruction manuals for video games are seen as less of a necessity these days, but they still can give a game a bit more soul, even today. Katherine Cross explains.

Nostalgia over the contents of once-bountiful video game boxes and jewel cases is nothing new. One of my favorite gaming memories involves The Elder Scrolls III: Morrowind’s beautifully detailed map of Vvardenfell (pictured above) spread out beside me to help me navigate every enchanted path of this world.

It was as if this bit of Tamrielic errata had magically materialized in real life; a bit of the world I could actually hold and use.

The instruction manual was nothing to write home about, but that wasn’t true for other games I grew up with--consider Homeworld, recently re-released in a remastered special edition, whose manual was mostly written in-universe as a historical, political, and tactical guide for the future commander of the Mothership (i.e. you).

Replete with detailed descriptions of the ships at your command, the histories of every clan on your planet, and even a debate between two fleet officers (which taught me the useful insult “Your Kiith Matron!”) it’s a master class of instruction manual design. I’d pore over it even when I wasn’t actively playing, reading for fun, as surely as I would my Star Wars novels.

It’s something of a miracle that my copy of the manual, entitled “Historical and Technical Briefing,” is so pristine considering how well-loved it was. But as I unearthed it from my piles of game manuals and D&D books, I got to thinking about the connections between the two and how there’s something more to our love for these lovingly-written manuals than mere nostalgia; rather, they may be a game mechanic unto themselves.

The basic purpose of an instruction manual--to teach players the basic controls of the game--is increasingly being fulfilled by ever more sophisticated tutorials in modern games that attempt to teach the player by doing, surely a more durable instruction method. Even Collector's Edition game boxes, that last bastion of stuff-laden video game packaging, usually don’t include manuals.

But there was always more to it than teaching you which buttons to press when in these older manuals. They bridge the gap between the player and the game environment, and provide developers with numerous ways to enrich their narrative and setting without impinging on the elegance of certain parts of their game--especially important when you’re making something besides an RPG where space for narrative is at a much greater premium.

Some manuals, however, truly rise to the level of my old Morrowind map. A piece of the world sprung to life. The instruction manual for Wing Commander was an on-board magazine entitled Claw Marks, filled with set-dressings for the game’s universe--and it should be no surprise that its 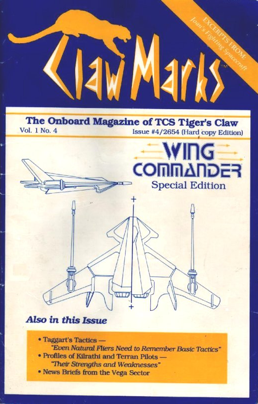 author, the late Aaron Allston, was a roleplaying game designer in addition to a sci-fi writer.

The Claw Marks magazine, still much beloved among fans, was rich with lore. From the news briefs about a USO-style show, to a guide that actually teaches useful tactics for the game in an in-character/in-universe voice, to the profile of ‘by the book’ Captain Jeannette “Angel” Devereaux (who I suspect would’ve been my role model had I played this game as a child), it all lends meaning to what happens in the game, investing the player in the events and actions on-screen.

The original Fallout’s 50’s-ish nuclear fallout survival guide [PDF here], which treated some game instructions as if they were teaching an in-universe reader how to play through a simulation, is another classic in this vein, but so too are more recent entries. Halo 2’s twin manuals, one each for the regular and special editions, provided players with tactical guides written from the perspective of the humans and the Covenant, respectively, the latter elevating the series villains above mere plot-necessity [PDF].

Manuals of this nature seem to wear the powerful influence of pen-and-paper roleplaying games, which helped shape early video gaming in a number of ways; they are the inheritance of PnP RPGs’ tomes of in-universe data that, in spite of their intimidating length, draw you in as surely as a finely crafted novel.

The “authoritative voice” of the tabletop roleplaying sourcebook has featured prominently in my academic writing as a wellspring of inspiration for players. In spite of the proliferation of home-brewed rules, the books set a tone that retains an indelible influence on almost every gaming table. They provide the inspiration that makes meaning of play.

The sourcebooks’ content stimulates creativity and investment; it is often the dark matter of what makes a game more than “just a game,” and instruction manuals are quite capable of doing the same.

One of the issues with Civilization: Beyond Earth, the spiritual successor to Alpha Centauri, was that its lore felt disjointed for want of a corral of wider significance that could motivate emotional investment. There were flashes of hope buried deep on the Civilization website, however, in the form of interviews with each of the major faction leaders that lent them desperately needed personality and emotion. Yet that material would have been better suited to, at the very least, a PDF that came with the game as a free download.

This would not have fixed all the problems with Beyond Earth’s presentation of its lore, but it would’ve helped give players more of a reason to care about the factions they chose.

The best instruction manuals, past and present, are themselves part of the game, to be revisited again and again. Taggart’s Tactical Guide in the middle of Claw Marks would definitely be an on-hand reference, even in the midst of intense play. They turned pixels into majestic ships and striking characters, adding narrative in a way that would have been ponderous had it been integrated into the full game.

They are also an expressive mechanic that seamlessly conveys the game’s spirit, its ideas, and the feelings it is meant to inspire through a narrative exploration of the world and-- sometimes-- the controls. 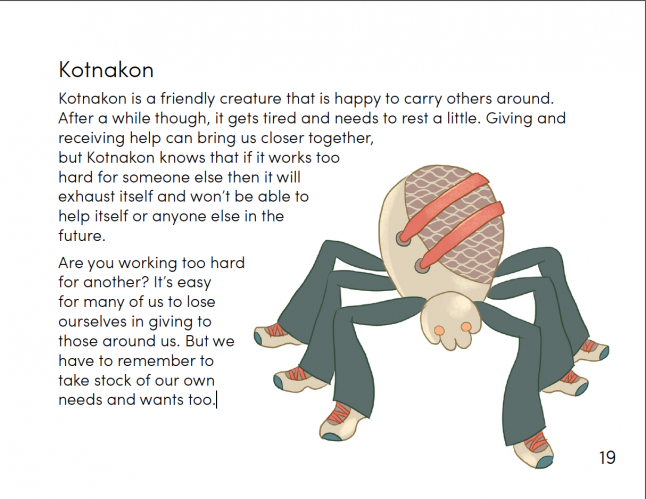 A sneaker spider of sorts, from Minkomora

A prime example of this can be found in Kikopa Games’* Minkomora instruction manual, teaching you to play its serene exploration game. Through its warm writing and art you are introduced to the basic controls of the game and to its cast of Yellow Submarine-style creatures. One of them is the Kotnakon, a sneaker spider of sorts that can act as a mount for your character; the manual explains that it will need to rest after carrying you for a while. Simple enough data for the player. But the manual goes on to say:

“Are you working too hard for another? It’s easy for many of us to lose ourselves in giving to those around us. But we have to remember to take stock of our own needs and wants too.”

Each creature’s blurb seems to reach across the divide between game and life.

The manual becomes, here, another vector for expressing Minkomora’s aesthetics and sensibilities, conveying the game to you as you read it. Simple though it may be, lacking my beloved appendices and subsections, it still effectively conveys a strong sense of what Minkomora is and means, lending character and colour to the game world before you even set foot in it. Minkomora's contemplative embrace, embodied by its denizens who teach you something about yourself, is expressed through the manual.

It also shows a path to digital distribution for cost-conscious developers; you no longer need to expensively print copies of a manual in order for it to perform these functions.

Digital distribution may not quite replace the wonderful tactility of our older manuals, maps, and books, but they still can still do their job quite ably. The Wii U’s digital manuals, integrated into the console’s home screen also provide fertile ground for experimentation here; if we have to have digital manuals, developers can find a way to make them do something a physical manual couldn’t. Video clips, simple mini-games, spoken-character bios or other voice overs. Imagine, for example, a cyberpunk themed game where the manual was a digital newspaper that the player could flip through at will, setting the stage for their game.

Civilization’s Civilopedia provides another model here, as does the late Warhammer Online’s Tome of Knowledge which was a brilliant in-universe way of tracking achievements, collectibles, and organising tutorial data along with a host of other features. If one’s company has an allergy to printed matter, there’s plenty of possible avenues to explore. 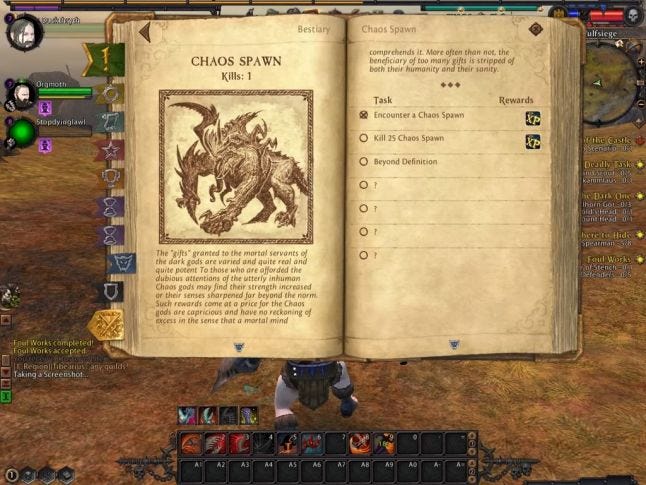 We should remember why this is worth doing in the first place.

Manuals can do more than instruct; in games, they express. They begin the process of surrounding the player with the game world and making it mean something. There are countless ways to do this, but the role played by manuals has been unique because they often reached out into the world outside the game--giving players something to psychically or even physically hold on to. They provide a way to extend the game’s universe of meaning in a way that makes few if any demands on the content of the game itself.

It may be time for the game industry as a whole to revisit the concept of the manual, even as game developers find other innovative ways to teach players how to play. If games need a bit more of that ever elusive quality known as “soul,” this is surely one place to begin.

*I recently appeared in a book edited by Merritt Kopas, one of the devs behind Minkomora.