Games are defined by their interactivity. You touch, move, see, and hear various aspects of the gameplay which all serve to immerse you in the experience.

But another sense has yet to be taken seriously in gaming: taste. Game designer Jenn Sandercock, who I interviewed in this space about her work on the adventure game Thimbleweed Park, has been developing her own line of edible games. They offer a simple, charming pleasure, but also point the way to another frontier of interactivity for games to explore.

They offer a way of thinking through the purpose of game design, but also raise a variety of new challenges for anyone looking to take it on. To wit: I couldn’t eat most of Sandercock’s offerings due to dietary restrictions. But there was still plenty to savour.

At OrcaCon 2018, I watched Sandercock demo her Order of the Oven Mitt, a tasty mix of chess and Connect Four, for a quartet of curious players. She took on the role of the Grand Knight, a kind of game master who referees the event and reads out the various and sundry “sacred rituals” (more on that in a moment).

The game is played on a chess-style board and in the same duelling manner. The players were split between two boards. Each player controls a uniquely shaped piece that moves like a chess Knight with its L-shaped manouevre. One player chose an edible piece carved in the shape of a mouse, while the other chose a rather amusing tripod which looked like a chocolatey War of the Worlds character.

Unlike a chessboard, however, the field was fully populated with a variety of edible pieces. If you landed on one, you, naturally, ate it. But you also had to perform a ritual when you did so, according to the Sacred Tome of the Order of the Oven Mitt. Each consumable piece had a different ritual; for instance, landing on a piece with a gummy-bear base meant you had to do the following: Apologise to the Gummi Bear -> Bite the head off the Gummi Bear -> Say thank you to the Grand Knight.

There are also white squares which “sully” you if you land on them, and should be avoided. (Edible pieces sit atop chocolate-like crackers). Thus there’s a bit of strategy to movement, further enhanced by the fact that your arrival on a square shifts the other pieces down a given row. Pushing white squares off the board is to your advantage. 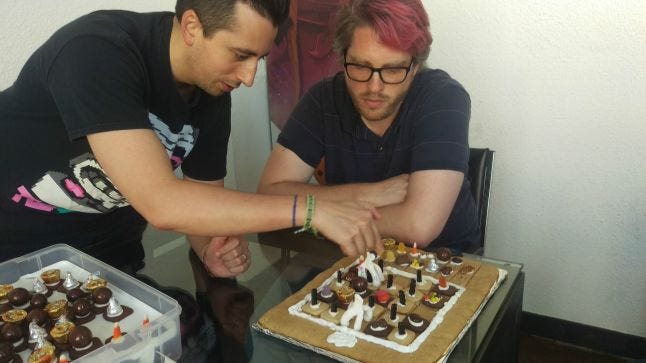 A version of the game in action

Sandercock wanted to create a cute icebreaker of a party game and succeeded. What I found especially charming was how the game glories in its ability to induce vulnerability. It’s hard to be nervous around others when you’re all acting equally ridiculous because you ate a smore. I was certainly taken with it.

As I said, however, I couldn’t really partake because of dietary needs. And I know this is heresy, but I’m also not especially wild about sweets. As I watched the Order of the Oven Mitt play out I was fantasising about what such a game might look like with sushi, dumplings, or savoury hors d'oeuvres. And as I considered what such a game might look like if it were tasty to me, I found myself getting into the spirit of things even if I wasn’t able to try Sandercock’s doubtlessly delicious confectionaries. The players certainly seemed happy enough.

It’s hard to imagine a mass market version of such games--even if, by their very nature, they might offer a lucrative market in subscriptions to replenish consumed pieces. A few food-based variants of popular games have been made over the years, but they’re hardly the norm.

More plausible is the idea that they could be folded into the lives of cooking and baking hobbyists who would be eager to try a way to both cook and create games for their families. Games might come with a recipe book, relying on the player/game-master to make the relevant pieces or rewards.

But beyond retail possibilities, I’m more intrigued by how it empowers the individual would-be gamedev. Lots of people enjoy baking. Sandercock’s games show them how they could, feasibly, make an entire game all on their own with the same materials they’d use to bake the snacks they’re already making.

It’s an intriguing example of how games can benefit from a thoughtful integration of avocations that are seen as traditionally “feminine,” which, besides some of its unique challenges, may account for why so little work has been done here. But Sandercock’s example shows it may be worth pursuing and experimenting with.

At worst, you’ll at least have yourself a bite to eat.

Katherine Cross is a Ph.D student in sociology who researches anti-social behavior online, and a gaming critic whose work has appeared in numerous publications.
Get daily news, dev blogs, and stories from Game Developer straight to your inbox
Subscribe