Mixing mind control and stealth in Tidal Affair: Before the Storm

Vancouver studio Overcurfew discuss how they designed and balanced a stealth game in which the hero can manipulate enemies with her mind.
Phill Cameron
Blogger
January 15, 2016

Tidal Affair: Before the Storm (Tidal Affair) by Vancouver studio Overcurfew didn't initially set out to be a stealth game.

"The mind control came first; the stealth was second," says director Kevin dela Cruz. He was interested in a certain style of mechanic, one where the player could take control of enemies. Adding stealth felt like a natural progression, and in the end, the stealth genre and the mind control mechanic played off of each other to create something unique.

Manisha, the protagonist of Tidal Affair, is a thief who the magical ability to control minds in her vicinity. To counteract this ability, Manisha herself is quite weak, and will die after just a few shots from enemies. As such, players have to carefully utilize her powers to turn enemies against each other while keeping Manisha out of harm's way. 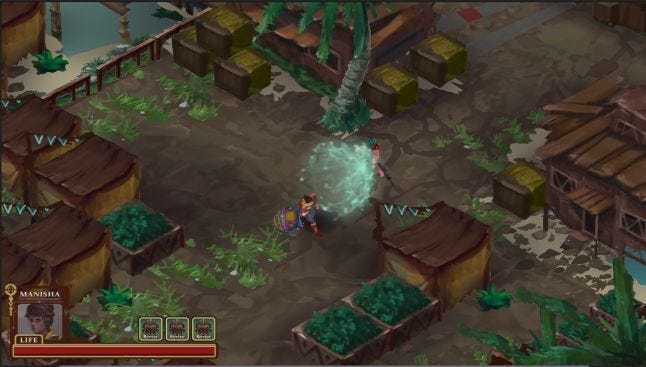 "Stealth just seemed right for the feeling we wanted to convey when you use your mind control power." says Cruz. After all, the stealth genre is all about using tools and your brain to get through a situation where you're outnumbered and overpowered by better equipped enemies.

Most of Cruz's work was in setting boundaries for Manisha's powers. If she could control enemies at will, not only would the game not be challenging, but it would render the stealth elements of the game irrelevant. Why hide when you can rush in and take control of people?

Overcurfew created a limited radius where Manisha could use her powers. "The placement of the radius was thought out carefully," says Cruz. This would force the player to sneak up on opponents to control them. 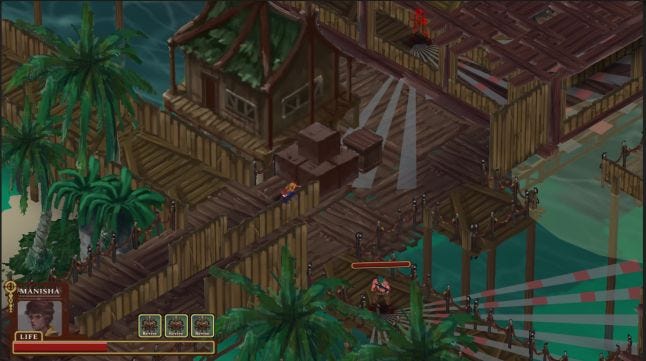 A magic bar was another important limitation to keep that sense of weakness in place. The bar steadily drains as players manipulate one of the enemies. The bar does refill quickly once it's emptied, but it does leave the player vulnerable for a period of time with little to fight back with. The bar will also empty completely the moment the enemy you're controlling dies, and has the added effect of leaving Manisha stunned and immobile until the bar refills.

This means that not only is the range of mind control power limited, but so is the ability to use the power. In some ways, using it poorly can be more dangerous than not using it at all. Mindlessly taking control of foes and making them shoot each other to death would leave Manisha paralyzed and in a bad position with enemies closing in.

Getting this all to balance was the difficult part. "There were some points during developments where things felt like they weren't coherent. At times, it felt like Manisha was either too fragile, or she ruled the world," says Cruz. One vital tweak is that when players release a controlled enemy to keep from running out magic, that enemy will be stunned for a few precious seconds--enough time to find a new hiding spot. 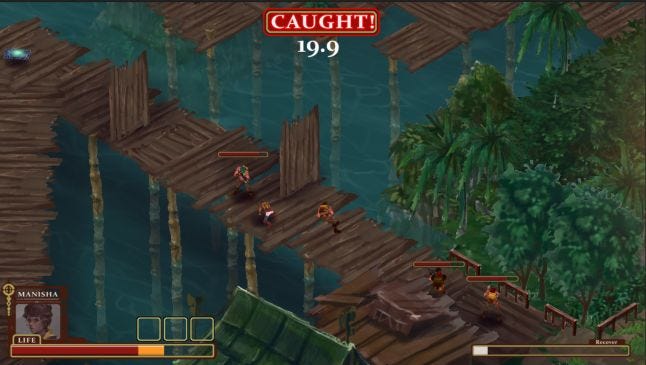 "We really wanted to push the genre into a different direction. We wanted to stay away from old traditions and offer something new to players." says Cruz. It started with giving the player great powers, and then asking how limiting those abilities could make the game more interesting in how it plays, what its story would be, and how the player can see the world. By keeping his initial idea firmly in-mind, Cruz saw ways to build onto it and bring something new to the stealth genre, working hard to balance it while also letting it evolve naturally.

Cruz's mechanic and genre choice fed off and necessitated each other, each filling in gameplay gaps and needs of the other to flow into a single, cohesive game. It took some work and testing, but it was the limitations of stealth and the great powers of mind control that shaped each other, each contributing to create that unique, challenging game that Cruz was striving to make with Tidal Affair: Before the Storm.