Mechanics and characterization: A Remember Me boss fight analysis

Solid characterization can elevate a game. But as Capcom's Remember Me proves, a poorly conceived villain can undermine a great boss battle.
Game Developer
Staff
August 26, 2015

“Don’t fight your desire to worship me!”

Madame, the Bastille’s dapper prison warden from Capcom and Dontnod's Remember Me, proclaims this from a digital throne of trauma that makes for one of the single most expressive boss fights I’ve ever played.

Your character, Nilin, fights against the woman who had once incarcerated and tortured her, someone who breaks her prisoners through psychological torment that leaves them well and truly in the thrall of Stockholm Syndrome; it is altogether fitting that Nilin should battle her on a glitch ridden, perilously storming mindscape.

The geometric nightmare—the words MEMORY and TRAUMA emblazoned over parts of the polygon-scape as if the visual metaphor were not expressing Nilin’s own inner demons violently enough—is also the best possible expression for Madame’s power and her particular brand of evil.

Madame’s unique form of control was always psychological, an all-too-fitting theme in this game about memory and its often terrifying power. It is what makes her boss fight so singular. You battle her spectral minions—in the form of prison guards—until you can build up a powerful enough attack to draw the distantly hovering Madame back onto the battlefield for a few rounds of direct combat. 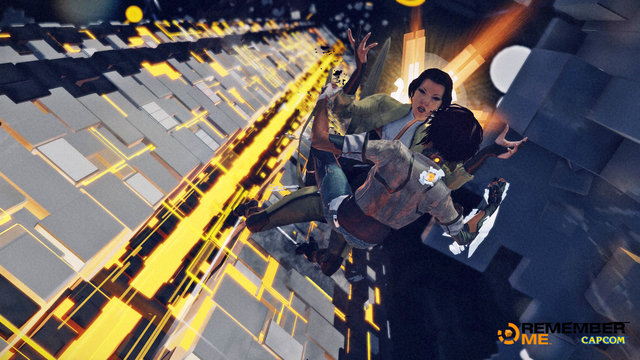 She is always at a remove, as if behind a one way mirror, or, in another phase of the fight, hidden amongst illusory copies of herself. These are not new mechanics in boss fights, mind, but they are so well-suited to her because they do not feel like cut-and-pasted design tricks; they feel like fighting Madame herself. The terrifying maze of mirrors she expresses through her mechanics is about who she is as a psychological torture artist, a mistress of memory who deals in distances and illusions, power and seduction.

But there is a dark side to this and, indeed, the entire game.

Like a poorly conceived connect-the-dots puzzle in a children’s book, failed characters can provide clear hints of what a full picture would look like. Remember Me is replete with such characters, and even Madame is no exception, although the expressive mechanics of her boss fight manage to go some ways to filling the gaps left behind by the game’s writing. It's not enough to overcome the fact that, as if it were an opera flowing from a badly written libretto, the game’s “music” (in this case, the mechanics and events) is given very little heft and texture by the narrative.

"Narrative is not a luxury, it is a skeletal framework that can make or break even the most mechanics-intensive boss fights."

Both Madame and another villain, the CEO of the antagonist corporation Memorize, Scylla Cartier-Wells, are thus left as sketches waiting for color and shadow. The game’s characterization is a series of breathless absences across the board, for men and women alike, and so their weaknesses should not be attributed to sexism alone. But they do also fail in distinctly gendered ways that suck the limited narrative oxygen out of every room they stand in. Madame is consumed by a Freudian sexualization, while Cartier-Wells’s grand, nefarious plans are undone by a maternal emotional outburst. But we’d do a disservice to both women if we left the analysis there. What both were lacking was that neither made me want to root for them.

You see, I did not want to worship Madame.

For all the beauty of the design that went into her—from her elegant suit and coiffure to her cane, to her narrative situation as a psychiatric warden who lorded over a memory-wiping machine of terror known as the Panopticon—nothing about her dialogue or back story was particularly memorable. The ingredients were all there, but never came to a boil. What was left was Madame’s visual language: seductive, sexual, the psychologist-as-fucktoy, a surrogate mother there to consume you with an annihilating love. Madame comes off as a Freudian mother goddess waiting to drown you in an oceanic, lobotomized bliss—so many of her one liners during her boss fight are sexual after all.

But why Warden of the Bastille?

There was precious little behind her, no conviction, no grand sense of ideology, scientific or political, that seemed to drive this indisputably powerful woman. You know who she is, where she is, but not why she is. She is sketched in such a way that should leave her far more compelling than a mere Gallic neo-Eichmann, pulling her assigned lever in this corporatist republic’s machinery of terror.

What most of the best villains elaborate or express in their characterization is a roadmap of thought that allows you to see how they became who they are. This need not be expressed in a tedious dump of expository back story, but rather simply showing (if not always telling) why these characters do what they do.

With Oh Eun-a, a villainess from Christine Love’s peerless Hate Plus, I disagree thoroughly with her ideology but, in the words of The Big Lebowski’s Walter, “at least it’s an ethos.” Oh Eun-a ‘shows her work,’ so to speak, in how she arrived at her bone-chilling philosophical conclusions. I can follow the shadowed paths she walked well enough that her thoughts follow a logical order, each premise leading to a new conclusion until dystopia is birthed. I feel that spine-tingle that whispers “there but for the grace of God go I,” because I see how it is possible for someone, a nominally good person, to become Queen Consort Eun-a.

Not so with Madame, and for that matter, not with Scylla Cartier-Wells, either. We do not really have a sense of what they believe or why. Both women are committing an action that must be stopped for obvious reasons—Madame’s torture, Cartier-Wells’ heinous genetic experiments—but little else is said, reducing them to mission objectives rather than full characters.

It renders Madame’s boss fight an incomplete gesture. The mechanics are saying something profound, but the game furnishes us with too little language to decipher it with. In the process, its brush with genius is just that, a brush, and most likely, it will be remembered by players as an overly long, ultimately tedious boss fight (if you look up the various let’s plays of it, most are over ten minutes in length).

Narrative is not a luxury-- it is a skeletal framework that can make or break even the most mechanics-intensive boss fights.