The developers of Frostpunk drop by to discuss how to properly manage tone when making a game with explicit social commentary.
Alex Wawro
Blogger
April 30, 2018

"It's really easy to just grab the most edgy and hardcore decisions and make it as grim as you can, and as violent, and as sad. It gets comic really quickly, and doesn't have emotional impact if you push and push for the sake of...cruelty."

Last week developer 11bit Studios released Frostpunk, a Victorian-era city simulator that imagines a world driven to the brink by an apocalyptic arctic event. The Polish developer says it's already sold 250,000 copies, showing that players have taken an interest in the game's mix of Industrial Era city simulation and social commentary.

As we've asked time and time again, how do developers inject this kind of commentary in their games without alienating players? During a stream of Frostpunk on the Gamasutra Twitch channel, we got some commentary on this subject from senior game designer Marta Fijak.

Fijak described her work on the game as focusing on the law and narrative systems to casually introduce authoritarian policies to the player, trying to let them explore the "boiling frog" theory of creeping authoritarianism, and how they might slowly tighten their grip on a society when faced with what seem like dire decisions.

But according to Fijak, nailing the right tone to get that message across wasn't easy, especially when drawing from an era that seems so inconceivably cruel by today's living standards. Per Fijak, the game was at first "too subtle, and our testers and first focus players didn't know what we wanted to convey."


"Finding the middle ground between those two points was the biggest challenge [in] building the society of Frostpunk."

Then, when 11bit pushed the game's moral quandaries to further extremes, Fijak said the problem was that the conundrums were almost too comic in nature.

"It was just not enough, then we put it on the other side of the spectrum. And it was too harsh, too graphic, too much, and the players said they couldn't take it seriously," she said. "Finding the middle ground between those two points was the biggest challenge [in] building the society of Frostpunk."

Since Fijak specifically discussed wanting players to take stock of how societies slowly shift to dictatorships, we did ask if any recent world events had inspired her and her colleagues during development. While Fijak did confirm 11bit was "paying attention" to events in politics, she deferred from mentioning any specific instances of what countries or leaders she might have been referring to.

Though Frostpunk takes a literal top-down view of this Victorian society, players are still able to click on individual citizens for a quick look at where they live, where they work, who their family is, and how healthy they are at a given moment. Altogether those citizens help drive the discontent and hope systems, which inform what events the player will encounter throughout the game. 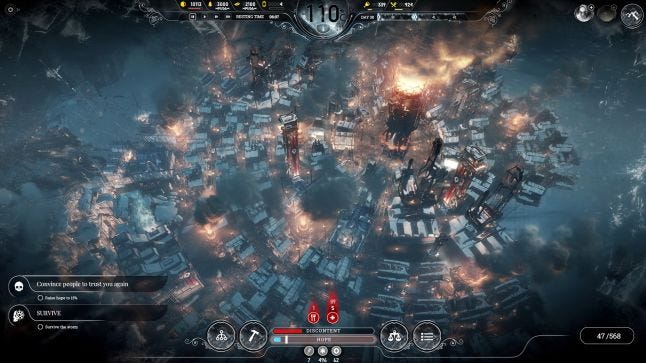 Though Fijak gives a lot of credit to the AI programmers for wrangling Frostpunk's ant-like workers, she says there were important design considerations to make when incorporating them into the broader scheme of play. "From my perspective, every character is described by a set of needs...there are about 13-14 of them...including classic ones like Maslow's [Hiearchy] of Needs, the basic ones, sleep, eating, feeling safe, then needing something greater, that was inspiration for the design of our people."

"We have the needs system for every citizen, and that system communicates directly with the AI. Every citizen and every not-citizen...is a separate agent with separate desires, and they are deciding on their own every few minutes," she said. "'Maybe I should eat, maybe I should go to pub, maybe I'll do something.' Then we aggregate the average result of citizen needs, and some other factors, and this is how you get the discontent bar in the bottom, because this is an average of all citizens, with some other variables. And the hope system is similar."

Tomasz Kisilewicz, who worked on the world art and UI art for Frostpunk, added that part of the appeal of the tiny citizens was that the animation team tried to make sure each citizen was viewable when doing a given task, helping translate those needs into actions that the player can zoom in on.

A definable aesthetic for a dark past

Sadly for this writer, it's fair to say that the steampunk aesthetic has not only been slightly overplayed in game art, it's also been stripped of it "punkish" origins that emerged shortly after cyberpunk. This may not be familiar to some of our readers, but like cyberpunk, a lot of early steampunk literature was concerned with class differences and the damage dealt on society by the noble elite (or at least, this is something author Jess Nevins has argued). 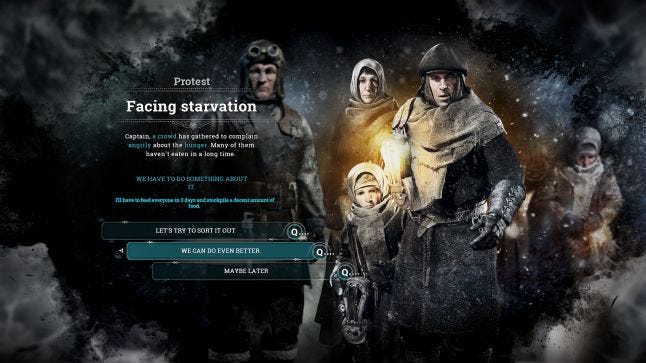 Frostpunk then, with its steampunk art mixed with a frozen apocalyptic setting, helps revisit the class-inflicted pain of the Industrial Age, with its child labor and extended working hours (both helpfully manifested in the game in mechanical form. To combat some of the visual business this aesthetic can create Kisilewicz explains that from the art perspective, it was important to give individual buildings shape and color codes to help players understand just what kind of hell they were going to subject citizens to.

Of course, when one of your defining aesthetics in a game is the horror of snow, you need to find ways to create variety so it's not just a sea of white. Here, Kisilewicz says the weather and time changes were what helped drive diverse looks for this frozen society, helping maintain that tone that Fijak and her colleagues worked so hard to build. "With every change of weather, the color theme is changing a little bit. We have different tones, so we can realize that it's getting colder, and sometimes (though it doesn't happen often), that it's getting warmer."

"We also have camera effects that might be melting or freezing due to the weather change. From the perspective of the Frostlands, we wanted to make sure all of that is reflected there as well."

For more insight on the development of Frostpunk, be sure to watch our full interview up at the top of the story, and follow the Gamasutra Twitch channel for other developer interviews.