Lights in the dark: How Ashen's design sets it apart from other 'Soulslikes'

Creative director Derek Bradley opens up about the design of A44's remarkable Soulslike Ashen, and discusses how subtle art and design choices set it apart from the bleak worlds of From Software.
Phill Cameron
Blogger
April 18, 2019

A low fantasy world, plunged into darkness and plagued by beasts. Cooperation is refreshing and jolly, competition fierce and unforgiving.

In order to survive, you’ll need to learn every nook and cranny in your environment inside out, and exploit the hidden weaknesses of vehemently ferocious bosses.

This stock description likely makes you think of Dark Souls. Perpetually ingrained in academic discourse, the impact FromSoftware’s poster game has had on video games since its 2011 debut is insurmountable, However, it has also led to the coining of the term “Soulslike,” which is problematic at best and demoralizing at worst.

The term itself implies derivation, which complicates identity. It immediately associates a game with a single, irreducible ideal -- in this case Dark Souls -- and attaches a suffixed “like” to its composition, creating a compound word that defines it in a way that seems to say “almost, but not quite.”

In film, you could call Interstellar a 2001-like. In fantasy literature, almost everything modern is at least in part a Tolkien-like. And in games we’re cursed with this undying term: the Soulslike.

Exploring stamina-based combat as a genre

The game I was really describing in the first paragraph is Ashen. The reason that passage can be applied to so many other games is because it’s deliberately ambiguous. Dark Souls is an essential game for so many reasons: its boss-run structure, its intricately-designed environments, and its fragmentary storytelling, to name but a few. But heralding it as the original anguish-laden world teeming with a somnolent sense of melancholy isn’t helpful. When obscure blanket descriptions begin to envelop everything, words stop meaning anything.

That’s why Ashen was such an important game last year. “We never outright tried to be Dark Souls,” creative director Derek Bradley tells me. “We certainly love FromSoftware's games, but Ashen needed to be something that stood out as its own, and that came down to respecting the world which we had built, and treating stamina-based combat as a genre itself.” 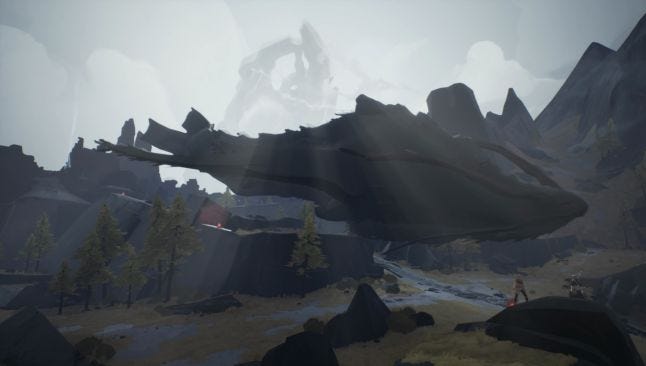 Despite its earthy palette and melancholic hues, the world the team at Wellington-based A44 built for Ashen is radically different to the bleak, twisted worlds of Dark Souls and Bloodborne.

“The art style of Ashen took a long time to develop, and continued maturing throughout development,” Derek adds. “We wanted to create a world that was beautiful and optimistic, yet dark and mysterious.” Perhaps the most marked aspect of Ashen’s design is how it manages light; it’s emphatically dark and mysterious, but more so in mood than in color.

“Ashen is a bleak world,” explains Derek. “But it’s a world with a glimmer of hope, and we wanted to carry that through to the combat. The multiplayer (or AI buddy) makes the biggest difference in this regard. When you have someone with you, you immediately feel that glimmer of hope shine through and it makes for a refreshing experience.” 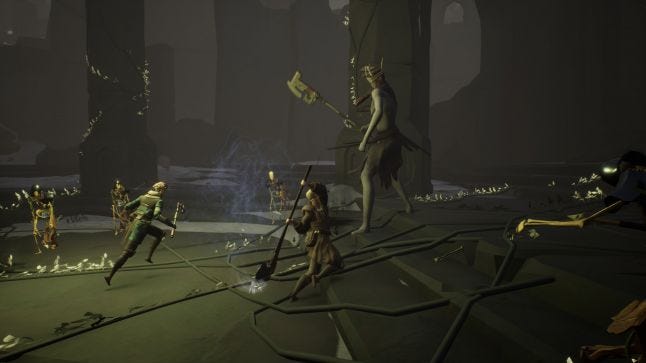 You can catch glimmers of hope in Dark Souls that are on the brink of burning out, but still flickering. However, hope is never truly alive. The world is plagued by despair, haunted by the cyclical nature of doom and destruction.

Ashen doesn’t feel that way. You may be traversing a sunless world, desperately searching for a place to call home, but even at its darkest, Ashen retains a sense of faith and purpose. As Derek puts it, “The world itself is harsh, so our multiplayer is purely positive and cooperative. The challenging world makes the connections you form all the more meaningful, and feeds back to town progression with the Townsfolk you journey with.”

“We wanted to create an organic-feeling world where you can experience a variety of interactions with people,” Derek tells me. “Some may be fleeting, which is meaningful in itself, and some will hopefully be very memorable for people.” The idea of finding meaning in the fleeting nature of life feeds into one of Ashen’s most important influences: The Road.

For those unacquainted with the work of Cormac McCarthy, The Road is a 2007 Pulitzer Prize-winning novel set in a post-apocalyptic world. It tells the story of a man and his son, wandering across the wastes of an imagined America, destroyed by a mysterious cataclysmic event. None of the characters are named, and none of the bleakness is contained. It’s an utterly brilliant work of fiction that will make you feel broken inside by the time you’re through with it. 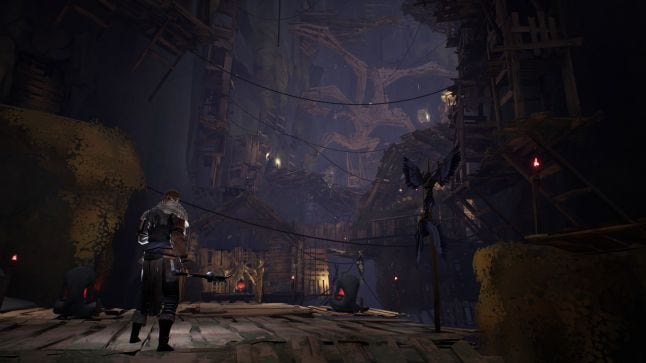 “The Road was a deep influence for us when Ashen was in its formative stages,” Derek explains. “It helped us make sense of a bleak, ash-choked world and the relationships that might make sense in a world like this.” To reiterate the importance of fleeting encounters, The Road sees its protagonistic duo meet all kinds of people. Some are benevolent, trying to get by as best as possible. Some aren’t so much.

“Imagining the story of The Road helped us craft the look of Ashen, the meaningful multiplayer interactions, and the importance of sticking together and helping each other through tough situations,” Derek tells me.

Although the novel is largely recognized for its cold nihilism, the relationship shared between father and son is a marvel of humanity in a world mostly without it. In a way, the absolute obfuscation of identities creates a sort of eerie familiarity, where nobody knowing anybody makes everybody a curiosity. People approach each other with slow skepticism, creating an uncanny pre-linguistic style of interaction.

The same idea is mirrored in Ashen’s faceless characters, stripped of what marks them as human in order to see them as something else entirely. It’s quite a disturbing thing to see that it’s only when we’re utterly raw and humanless that the thing called “human being” becomes an all-encompassing collective as opposed to a concept we clutch at with butterfingers. 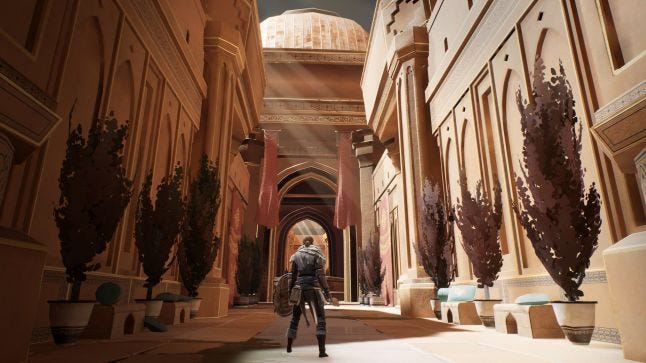 “An interesting anecdotal influence is that the song ‘Names and Races’ by Foreign Fields, of which e.hillman (the composer of Ashen’s soundtrack) is a member, was also heavily influenced by The Road,” Derek explains.

“Hearing ‘Names and Races’ was brought us to contacting them, and ultimately working with e.hillman on the music for Ashen.” e.hillman’s atmospheric soundtrack channels that same energy, allowing for the formation of a sobering sense of self. It serves as a reminder that the world’s quiet sigh betrays its majesty, that we’re all completely and utterly insignificant specks just floating, existing. Except it isn’t harrowing or defeating; instead, it invites a kind of nihilistic optimism, a meditation on how insignificance doesn’t synonymize with a lack of purpose.

When Ashen launched, it got the Soulslike treatment. It was a game inspired by a game, a fresh take on a tried-and-tested model. But Ashen is different. It has an identity of its own and an unwaveringly confident sense of self.

It’s a world filled with a plethora of curiosities, a world designed to be simultaneously bright and dark. Most of all though, it’s a world that subverts familiarity; so much so that if you go in expecting to be acquainted with the familiar embrace of a Soulslike, you’ll be sorely disappointed, and then graciously impressed.

It’s a study of humanity in vivid color, clever in its composition, magnificent in its singularity. As Derek puts it, “Essentially, we wanted to make the game we wanted to play. We took inspiration from all around, from games and books we love, even to New Zealand itself. Everything we enjoy we tried to infuse into Ashen.”

Perhaps that accounts for how affecting and arresting the world of Ashen is.