Giving a few reasons why I think Level Design is just another form of Game Design.
Martin Nerurkar
Blogger
August 28, 2009

Level Design is Game Design!
Have I got your attention? Alright, so I admit the two are not perfectly the same but I am convinced that Level Design is nothing but a specialized application of Game Design. And I can prove it! First let’s start by looking at a pretty okay definition of Level Design:

Sounds simple enough, right? Of course if we were scientific about this we’d have to take a closer look at what digital spaces are. However that’s beyond the scope of this article and will be something I’ll talk about another time. For now let’s look at board games. Why? Because they’re quite similar to video games and because it makes it a lot easier to understand the topic. 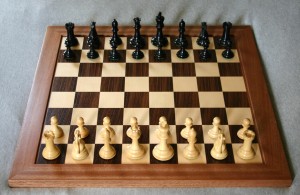 Now with board games, you have the rules of the game, which encompass how pieces can move, how a turn plays out and what the victory conditions are.

The other half of that puzzle is the design of the actual board, which could be seen as the level design of the game. It’s evident that when the board is changed, the entire game changes with it.

Imagine a game of chess, where the board is not 8×8 fields but instead 8×12 or maybe something more outlandish like an L shape. This will drastically change how the game is played. The same is true when a level is changed. 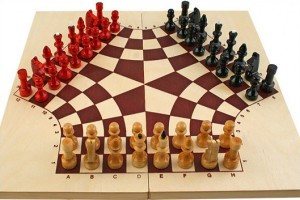 So if you think about it, the game space is nothing but another set of rules. They’re just visualized as a space to make it easier for us.

Instead of rolling a die and tracking the movement pieces on a board, we could simply use numbers to denote a token’s position. Say if you’re on field “3″ and roll a 5, you wouldn’t move your piece 5 spaces, you’d write down “8″ instead.

And then if there’s “special fields” you’d have a table where you could look up the number and see if there are any special rules for it. It’s obvious that this is a lot more complicated than moving a piece on the board, which is why we use spaces for a lot of our board games.

So if game spaces are just rules why is there a split between game and level design? There is no such thing in board game design, right? Well the answer’s simple: In the early days of game development there was no seperation: there often was just one person making the entire game, designing the rules, the spaces, the graphics and the sounds.

But because the increasing amount of content and complexity required specialization we now have different people doing different parts of the same job.

So with all that said, let’s look at that definition again:

And let’s look at Wikipedia’s definition of Game Design

I rest my case.