Integrating 'the nobility of work' into Hardspace: Shipbreaker

To its developers, Hardspace: Shipbreaker is more than a sci-fi shipcutting sim, it's a chance to explore the value of work while tearing spaceships apart with your bare hands.
Bryant Francis
Senior Editor
July 07, 2020

"Cutter, you've got five minutes left in your shift." Weaver's voice cuts softly into my ear while I'm carefully extracting a reactor from the heart of a massive passenger ship. Five minutes--that's enough time to salvage this reactor, and tear away more of the ship's hull for a few extra credits. That is, if the reactor doesn't blow up on me first. I'm only working on it because a meltdown started while I was trying to extract the ship's thrusters, and time is running the heck out.

That's the mood and vibe of Hardspace: Shipbreaker, a new Early Access, space job simulator from the team at Blackbird Interactive. It's an elegant mix of systems-driven gameplay with a blue collar vibe, a game where you're trying to pay off a debt incurred just by taking the danger-ridden job of tearing apart derelict spaceships. There's a fundamental contrast between the sheer awe-inducing nature of what you're doing, and the banal evil of a job that sucks away the value of your work before you have a chance to pocket any of it away for yourself.

Not many games can scratch that particular itch, but when they do, it's something special. Here's some insight from Blackbird Interactive game director Trey Smith and chief creative officer Rory McGuire about the making of Hardspace: Shipbreaker.

The value of blue-collar work

While showing off Hardspace Shipbreaker at PAX, Smith said one player yanked his headphones off and started sharing a story about being hired as a line cook. "He goes 'I remember I got this job in a kitchen, and they made me spend $150 on steel-toe boots before I could even show up. I haven't even gotten a paycheck yet and you're already taking money out of my pocket.'"

It's a story that one, is a disheartening reminder of how American companies will treat laborers, but two, is also the exact kind of experience Smith and McGuire wanted to invoke even as they took players to the sci-fi world of an orbital shipbreaking yard. "There's a nobility to blue-collar work that we never wanted to lose," Smith explained. "It's those construction workers sitting on the girders of [The Rockefeller Center], eating lunch. It was dangerous work, but they were doing something great for humankind." 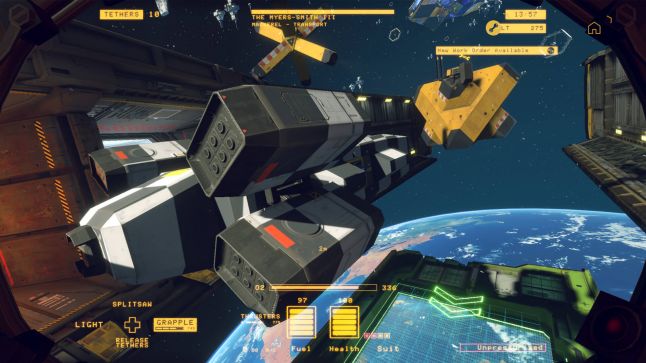 Great, dangerous work, that as Mcguire added, wasn't often done for fair wages or fair conditions. He said that as the game's development went on, the game's fiction took inspiration from The Gilded Age, a post-Civil War period in America where advancements in industry and chemistry led to incredible new developments, but a fundamental inequality meant many who created the new world rarely got to live in it.

"It was called the Gilded Age because on the surface, it was golden. But there were people that were working...six, seven days a week. It's where the five-day workweek came from, where child labor laws came from. There was this amazing thing happening at a civilizational level, but it was at a human cost."

Real-life shipbreaking still often demonstrates that cost. Smith described reference video of ships being hauled in to the beaches of Alaska, titantic steel behemoths that crashed with a massive "boom" when they hit the shore. Awe-inspiring, but fundamentally dangerous work for the steel cutters who have to go in and salvage it for parts. In space, that danger becomes a driving force even as players chase every dollar they can in scrapping it to bits.

"One of our early pillars was '1,000 ways to die,'" Smith said. It's a list of death options that are driven by the 'work order' system that drives player progress. Players are rewarded for salvaging particular ship parts in a certain timeframe, but many of these parts come with an inherent risk. As mentioned before, the reactor might blow them out of orbit. A loose object may slam into them if the ship is improperly depressurized. A fuel tank rupture might light their suit on fire.

Those deaths become part of the "flavor" that McGuire described when describing objectives for players to focus on. "The way that you approach pressurization is radically different than the way you approach reactors, which is also quite different from how you approach fuel lines, cryo lines and then some of the other elemental systems we have coming up." 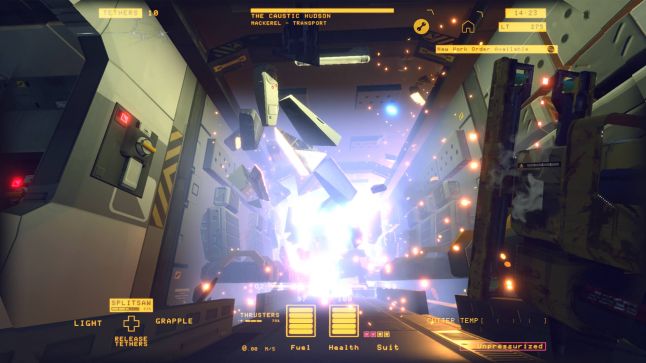 The different work order tasks, and the dangers they encompass, create that problem-solving space for players as they work across an entire ship. Early ships--which currently take the form of small cargo haulers--have fairly linear routes to fulfilling work orders. But as the ships progress in size, their systems become more interconnected. A reactor's stability is tied to the fuel line, which sits dangerously close to the cryo line. If the player is tasked with salvaging the power generator, they might sabotage their efforts if they do it before accessing any computer systems that make other tasks safer.

And all the while, the player is solving these puzzles while navigating a limited oxygen and fuel supply that can only be replenished by canisters bought from the company, or salvaged from the bowels of the spaceships they're tearing apart.

It might be amusing if Blackbird Interactive ever designed a game where players BUILT the ships disassembled in Hardspace: Shipbreaker. But for now, the ships come by way of a procedurally generated algorithm mixed with some pre-fabricated work done by the folks at Blackbird. For their part, Smith and McGuire say building these ships, and making sure they were 'fun' to tear apart, meant throwing out some usual ways of building spaces in games.

For one, it was impossible to just "whitebox" ships on the level design side, and have game designers come in and fill them out with objectives. McGuire described the company as having a "standard" of "Blackbird-worthy" starships. Some of the team members are industrial designers who are focused on creating ships that feel as practical as possible. "We wanted to do this design work where the fuel lines through the ship are creating design dilemmas, where the engine is placed is creating a design dilemma," he explained. "We basically put everybody together and they they solve the problem together."

Smith pointed out that any time feature were "silo'd" (built by one team without input from the other teams), it didn't tend to line up. From concept art through the finished ship, all of Blackbird's developers had to be hands-on at the same time. 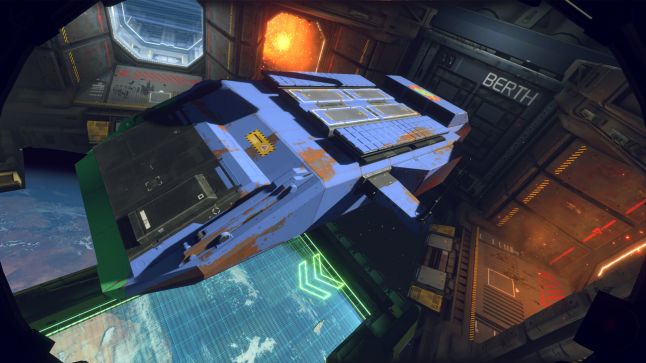 There's a chance that process could sound a bit fetishistic of a kind of sci-fi fidelity that can suck the fun out of a game. Plenty of other titles have shown that you don't need realistic spaces to leave a lasting impression on the player, but McGuire had a key point about the result of this process. "If you create a gameplay pattern where you've got fuel lines running through an area, the player is going to look at [ask] 'why are there fuel lines here?'"

There's a real sense of concern for player investment that described a lot of what Smith and McGuire discussed about Blackbird's design process, but it also intersects with what the game is about: the value of labor. While charting the game's development (which originated with a game jam that led to the zero-g maneuvering), they described a point at the two-and-a-half year mark of development where a vertical slice they'd produced FELT great, but only resulted in two hours of heavily scripted gameplay.

At the time, Blackbird Interactive was a 10-person team, and Smith says there was worry that even while the team was proud of the scripted level they'd built there would be a disconnect between that labor-intensive, low-yield effort, especially for sustaining a small company. Once the team began pushing down the procedural route, they discovered a unique blend of how all their work could expand into hours and hours of gameplay. The ships became technically feasible, the design space created a sense of fun, and the aforementioned industrial designers could use gameplay components to create a sense of authenticity to these creations.

When our conversation began, Smith and McGuire mentioned that they felt their game got a small marketing boost because the concept of shipbreaking has slipped into the consciousness of their target audience by other works. Star Wars Jedi: Fallen Order opens with the player character navigating a shipbreaking yard, and the sci-fi series The Expanse kicked its third season off with one major character becoming a shipbreaker after being shuffled out of the military.

But there may be an even larger phenomenon that makes Hardspace: Shipbreaker feel so relevant: in the United States, and in game development, the value of labor and the rights of workers are being reevaluated at a rapid pace, for better and for worse. No, much of that labor is not standing in the bowels of metal behemoths, laden with risk of injury or death. But with the spread of COVID-19, the service, soft skills, and other kinds of labor that eluded worker organization before are now faced with new kinds of risk that only exacerbate the struggles workers faced before March of 2020. 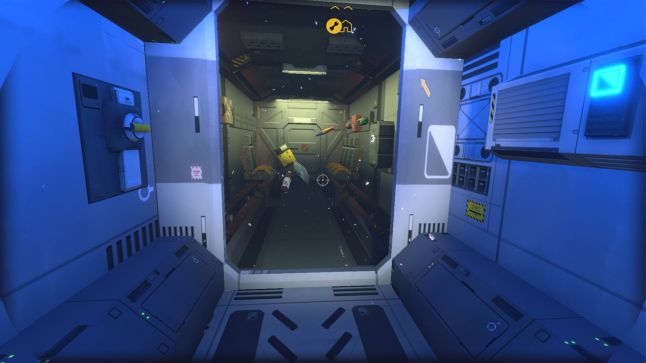 There was the former line cook that Smith mentioned before, but as I was salvaging chairs and computers from the comfort of my PC, I remembered doing almost the exact same job in the real world while working a temp job in college. With the help of a coworker who sexually harassed me on the job, and a manager who demanded we work extra time to cover for our lunch break, I moved server stacks, rifled through employees' desks, and helped disassemble an office that had once been the lifeblood for a small group of people.

It wasn't a job done while surrounded by the thundering mass of metal, or scored by the sound of a welder assembling the bones of a skyscraper, it was a kind of quiet funeral for something that once was, but now isn't. To the staffing agency, it was a contract that funneled money into their pockets. To the company that hired the agency, it was an efficient way to salvage resources it could use for some other high-investment workspace.

At the time, I thought it was just an easy paycheck between semesters, with the experience of Hardspace: Shipbreaker in the back of my mind, I feel empowered to look closer at the work I did, and what dangers, both psychological and physical, I faced on the job. Maybe we're all making that reevaluation these days, and maybe that's why tearing ships apart can feel so fulfilling.