Indie Games: The Importance of Being New and Different

With Steam's increasing popularity among PC gamers, and Steam Direct on its way, indie developers need to be confident that their games will rise above the rest. Those games will be the ones that bring something new to the table, or something different.
Owen Meier
Blogger
April 05, 2017

With the rise of Steam and PC gaming in recent years, it has become easier than ever before for indie studios to get their games out on the market for thousands, if not millions, of gamers to see. However, this easy access to consumers has also brought about the rise of indie studios themselves, causing many new games to become lost in the constant flood of releases.

The graph below shows the number of active Steam users from year to year: 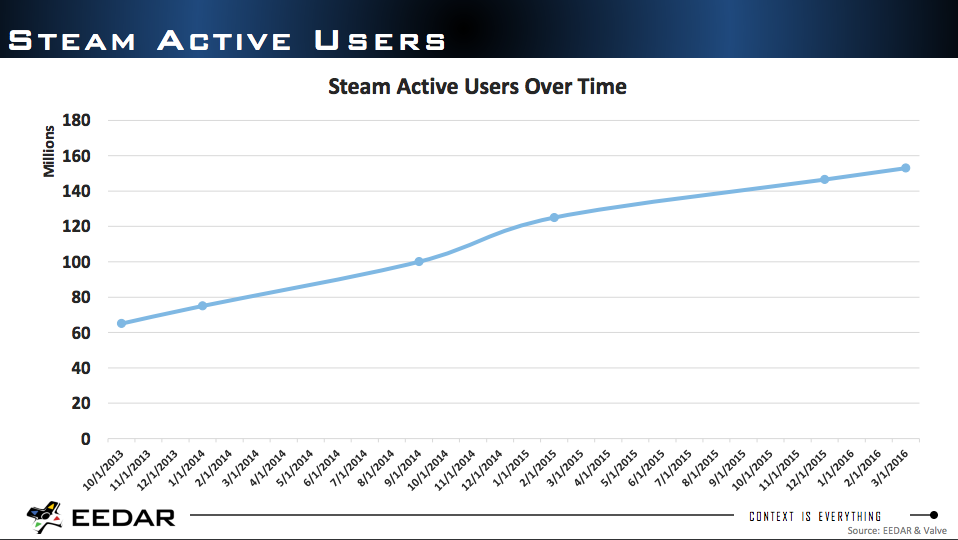 At the end of 2013, there were approximately 76 million active users on Steam, and by the end of 2015, there were almost 150 million. In only two years, the number of users on Steam has practically doubled, which is great news for games that are able to gain enough traction to earn brand recognition. However, not every game gets to reap the benefits of the increased number of users. As you can see from the following graph, the number of games released on Steam has also increased:

In the same period from 2013-2015, while the number of active users on Steam doubled, the number of games released on Steam per year increased sevenfold, from just over 500 to almost 3500. That means that twice as many people had to choose from seven times as many games as they did just two years before. This disparity has likely only grown larger since, making it even harder for your game to be noticed. With the coming arrival of Steam Direct the confidence that your game will be successful is imperative. So how can you make sure that your game rises to the top over all the others? Well, while there are no guarantees in the marketing world, you can definitely give yourself a better chance.

As an indie studio, you can’t realistically expect to sit down and create a clone of a popular AAA game with a slightly different look to it and make tons of money. Chances are, they have a bigger team and a lot more resources, so why would players choose your game over theirs?  You will probably end up starting with something simple, however, there are tons of studios doing that exact same thing. You have to do something no one else has, something different, or something new.

The easier of these two options, in my opinion, is to make something different. This raises an important question: What exactly do I mean by “make something different”? I mean take a basic type of game, like a platformer or an RPG, and add something to it, change the formula, break player expectations and preconceptions. Many popular indie games in the past, like Braid, employ this technique to differentiate themselves. At the most basic level, Braid is a platformer where you travel from point A to point B without dying in order to win. However, unlike a basic platformer, Braid has a twist, as the developers gave the player the ability to reverse time and incorporated it into the game as a puzzle-solving mechanic. Without this unique mechanic, Braid would have been indistinguishable from any other basic platformer, and probably would not have been anywhere near as successful as it was. Another great example of adding something different is a game everyone has probably heard of by this point, Undertale. Someone’s first look at Undertale would probably reveal what a lot of people consider to be fairly poor art, and a simple 2D adventure RPG where the player collects some items along the way and fights enemies. However, if you’ve played or watched the game in depth, you know that Undertale is anything but a simple 2D adventure RPG. Each fight in the game can be settled without the player attacking the enemy. The story and dialogue transition from silly and childish, to dark and serious, and the game has multiple endings dependent on the choices the player makes. These differences are what drew in so many players and drove word-of-mouth advertising for the game. Adding something different can be the nudge your game needs to be successful, but that unique quality must be a key priority of development. Focus on what makes your game different when you are designing it, make sure it feels right, and that it is fun for the player.

The second, and more difficult option that I have seen, is to make something entirely new, but be cautious with this approach. Just because it’s new doesn’t mean it will be fun. In theory, you could make a game about a character that dies in the main menu and can never be played again, and it would be new, but not fun for the player. Once again, popular indie games are a perfect place to find successful applications of this idea. Games like The Stanley Parable feel like entirely new experiences; rather than building upon an existing formula, these games often defy categorization by genre. In making a game that feels completely new, you gain the advantage of having very few similar competitors, and as long as the game is fun, people will want to buy it. One of the best examples of this concept is Rocket League, a game completely different from any previous game (excepting Supersonic Acrobatic Rocket Powered Battle-Cars, which was made by the developers of Rocket League and is essentially an alpha version of the game). Without any similar competitors existing in the market, everyone who wanted to try the experience had only a single choice. In comparison, if a player felt like trying out a new first person shooter, they would have countless options to choose from. It is important to note that, while being the only game of its type gave Rocket League an advantage, it still had to be polished and fun. The act of being new in itself does not guarantee the success of a game.

At the end of the day, I would say there are a few key things to remember. Firstly, your game doesn’t have to be completely new in order to stand out, just making it feel different is enough. Secondly, make sure you focus on the aspect of your game that makes it stand out and ensure it feels right for players. Thirdly, remember that even if your game has outstanding design, and a revolutionary mechanic, good visuals and sound are still important to its success. Lastly, and regardless of whatever else you do, make sure the game is fun.