How to make a Rapture

The latest game from The Chinese Room, developer of acclaimed first-person exploration game Dear Esther, is Everybody's Gone to the Rapture [trailer] -- a meditative experience set in a sleepy village in the English countryside.

Sounds lovely, except it's "sleepy" because nobody seems to be alive anymore. But their traces remain.

That's what I've gathered from first playable press demo, which studio manager Tom Turner brought to Sony's Bay Area HQ this week: Everybody's pretty much dead. Or missing. Or both. The title of the game implies a religious ecstasy; other clues suggest disease, or maybe even an extraterrestrial holocaust.

That ambiguity is "what makes the whole thing interesting," says Turner.

"If you stick to your guns and convictions creatively ... I think then you stand a chance of creating something unique that does capture imaginations, maybe beyond what you'd intended." 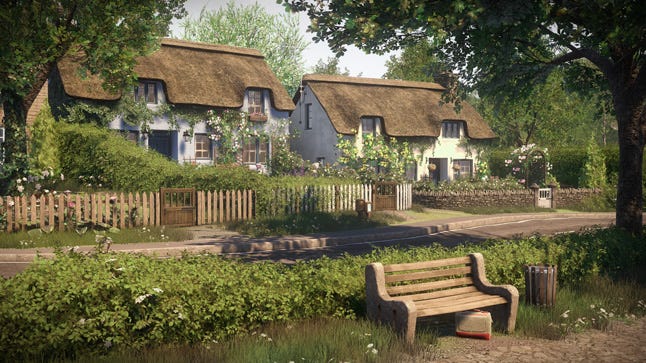 The game is steeped in CryEngine-powered verisimilitude, as you can see in the images accompanying this story. Turner says that realism is a product of the team's intimate knowledge of its early '80s setting as much as the technology in play: An English team makes an English game.

As you wander through Yaughton, listening to swirling, sparkling golden spirits relive the days (and in some cases, the actual seconds) prior to the disappearance of their acquaintences, friends, families -- and even themselves -- you'll gradually imbibe the game's story and mood, which is boosted not just by the visuals but also The Chinese Room co-founder Jess Curry's score, which Turner says is as integral a part of the experience as any other element.

"It's definitely been a backwards and forwards between game, story, game, and music, but I know they feel very strong convictions about their vision for what the story should be and what the music should be delivering. So yeah, you could say the game is a vehicle for delivering those two key things," Turner says.

"They" are Curry and co-founder and creative director Dan Pinchbeck, who is responsible for the narrative. 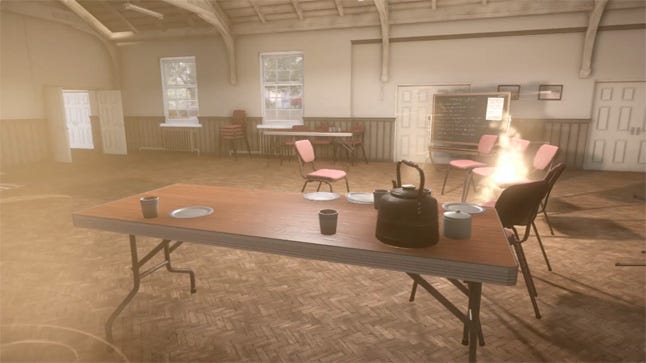 The fact that you can't see the townspeople as anything but a golden haze lends both deftly sidesteps the issue of the challenge of leaping the uncanny valley -- a very tough gap for triple-A teams to cross, let alone smaller developers -- while also letting the team avoid the massive cost of modeling and animating realistic humans.

Realism is clearly key to the experience The Chinese Room intends to deliver. A misstep with the visuals would be fatal to its mood. This experience is grounded in the real world -- so even if the stakes implied in the premise are huge, the stories themselves are small and human-scale.

In a medium known for the directness of its storytelling -- where so much of it is meant to impart merely mood, or even gameplay instructions -- the need to actually tease apart and interpret events is welcome.

"I think a lot of storytelling can come second-place to spectacle and effects and scenarios. That's become almost a bit of a crutch for immersing players rather than really, really super-strong narrative," Turner says.

"The thing is, for us, we believe that games enable us to tell stories like no other medium. But for us, the story has always been the starting point. It's always been the launchpad for everything that you're doing in the game, not the reverse."

Every developer by now knows the mantra to get mechanics into the game engine as fast as possible so iteration can begin. "The only way you're going to know if it works is to get it into the game and start playing around with it, definitely," Turner says.

But here, Turner is not talking about prototyping combat mechanics, like most developers might. The game affords only very simple interactions. He's discussing story, the core of the Everybody's Gone to the Rapture experience. "We were using very, very basic building blocks to prove out the scenarios, get the narrative in there as roughly as we could, and see if it worked."

"What we wanted to be able to deliver is not only story beats, but also space for you to contemplate and reflect on the story you'd experienced," says Turner. "And that really informs the actual, the practical development process. We laid out scenarios; we had them put in with temp dialogue. You go round and play it." 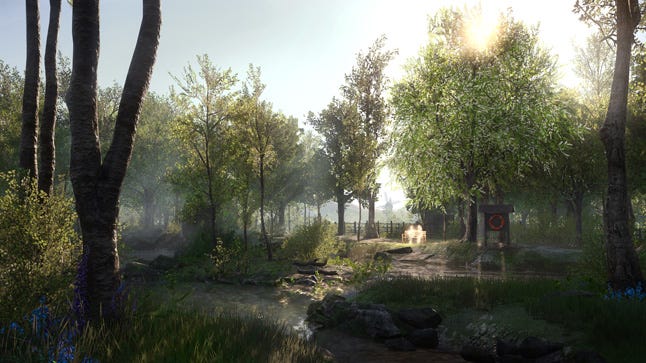 It turns out "time to think" is crucial to the creative ethos of Everybody's Gone to the Rapture.

In the demo, there's a particularly disquieting event in one of the houses. In the living room, two spirits are talking. Balled-up, crusty, bloody tissues litter the carpet. A mother is telling her husband about her children suddenly, and for no reason, beginning to bleed, and shortly after falling asleep and being unable to wake up -- and then finally, quite likely, utterly disappearing. She can't face checking to see if they're still there.

After a moment like that, says Turner, "you're like, 'God, there's not enough space for us to be able to think about that, because there's the next one there.' So you're like, 'We need to expand the environment. We need to give the player a couple of minutes, maybe, to really let that sink in.'"

The team recently removed a quick-run button from the game's debug mode so testers would be forced to test for the intended creative experience, too.

"It's obviously a very iterative process," he notes. "The game's been in development for coming up to like two and a quarter years, so the story has changed an awful lot, but the environment has molded around that story, and around that philosophy of delivering story and then contemplating and reflecting on it."

"I know that's been stressful for the art team. You tell them, 'All right, we have to go back into the height map now,' when they think it's locked, and we need to go and tweak it."

The town may be realistic, but it's a controlled realism -- one that supports the story in more than one way: Atmospherically, sure, but also mechanically: "The thing is, we've deliberately crafted a game that's mechanics-light. The story is the gameplay, and the uncovering of the story and the way you go about that is what we're hoping players will ultimately find rewarding about the game."

According to Turner, Pinchbeck "is quoted as to have said, 'The only fail state for the game is if players don't care about the story.' That's quite a high bar to set for yourself." And it's one many games would never consider setting.