How machination can help you improve your system design creation workflow

This post is about machinations and the importance of tools in game design. During this article, i will not talk about gameplay design (mechanics and gameplay creation) but mainly about system and internal economy design
Eddy NJIKI
Blogger
September 23, 2019

As they say in the front page of https://machinations.io/, Machinations is a browser-based platform to  design, balance and simulate game systems.

Machinations allows you to map any game system as an interactive diagram, set parameters that define the relationship between them, and visualize the way in which these systems work. Based on that, you can simulate different outcomes, plot results and balance your game's economy.

I first heard  about machinations in this great gdc conference “Game Design Tools: For When Spreadsheets and Flowcharts Aren't Enough”  by Katharine NEIL. However, in the first place this tools don’t really looks useful for me, until, during my internship, I had to work on the internal economy on an idle and management mobile game. As we had a very short production time, i understand rapidly that I had to find a way to design and simulate as fast as possible the game system in order to balance it.

Different options were offered to me:

Paper prototyping:  fast and easy to modify but you have to simulate the system by yourself, by moving coin or card, which can quickly start to be tedious. This can make the job … but i needed something more effective.

Computer prototyping: Too much time to have the result i want, i don’t have necessarily the skill to do it and programmers had other things to do.

Flowchart and Spreadsheet: I use it at first, that was working but i needed more control, the possibility to simulate an entire playthrough and more clarity. In fact,  the programmers needed to understand the game system, the relation between elements and how the resources transits between the different pools. Unfortunately, they don’t want and they don’t have the time to interpret complex concept map and read lengthy documentations. (I understand that every game production is not like this but if we can simplify the life of programmer, why not?)

(lengthy documentations who can be replace by one tool)

So I decided to learn more about machinations with the help of  “Game Mechanics: advanced game design” a book by Ernest Adams.

To learn machinations, you just need basic knowledge of internal economy in games.

The next picture shows the most simplified version of the system loop of the game I was working on during my internship, I’ve chosen to represent only some game aspects to keep it simple. 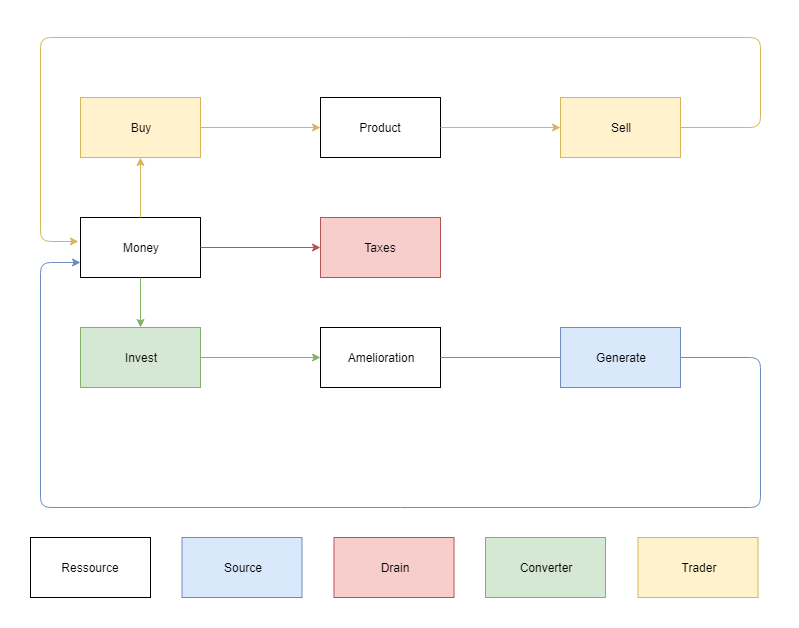 We will see how to represent and simulate effectively a little operation with machinations.

This is a simple trading operation, we trade money for product. If we say that a product cost 15 unit of money and if the character has the money, he can choose whenever he wants to buy the product. That takes me a couple of seconds to create and simulate this with machinations. I just have to create entities, name it, configure the equivalence between money and product, put the trader node in interactive mode so I choose when I want to buy the product and it’s finish.

Now imagine that the supplier has 2 type of product and the second one cost 30 units of money, i just need a couple of seconds to update my machinations system.

This is just a little preview of how fast you can create, iterate and simulate game system with these tools. Machinations help me a lot for create and balance the internal economy of the game I was working on during my internship.

III-Why i think Machinations is important for game designer nowadays

The fact that machinations allows system designer to work more easily on really complex system is not the only reason why machinations is important.

One of the problem in game design is that our work is too abstract, there are part of game design that can’t be formalized, especially when we talk about game feel, sensation and emotion.Also another problem is about documentation: it’s always with diagrams or spreadsheet that most of the time, only a game designer understand. Furthermore, the lack of formalization in game design have on one hand, consequences inside teams (mainly communication issue) and have an impact on the capacities to recruit good game or system designer. You can easily recognize a good artist by seeing is work, but for a game designer who have created the internal economy of a management game for example, you can have an idea of the operationality of the system he has created by playing is game  a couple of hours, but how can you be sure that the game economy is relevant in any case, with any outcome and balance in every aspect.

On the other hand, the lack of formalization makes it hard for a game designer to go work in another studio, in regards to the adaptation time or the studio’s way of working.

This problem is also relevant in matter of education: how can we train future game designers and say to them in school that they will have to adapt in studio because every studio have a different way to formalize, or even to design system.

Don’t get me wrong, i don’t say that every studio have to work the same way, i say that we need standardized tools in  the game design field.