How indies add flavor to monster combat 25 years after Pokemon

Catch, train, battle, repeat. After 25 years, the core aspects of Pokémon’s combat system have remained mostly unchanged. Although new features such as Mega Evolution and Max Raid Battles have been added to spice things up, mainline Pokémon RPGs still feature the same familiar gameplay that they always have.

With a saga that now spans multiple sequels and console generations, it’s impressive to see just how similar current-day Pokémon titles are to their predecessors. On top of that, Pokémon has inspired an entire generation of game creators to craft their own monster-taming RPGs.

As such, players now have limitless options when it comes to games about catching, training, and battling unique monsters. While each of these titles stands on their own, much of their DNA can be traced to the tried-and-true formula that Pokémon pioneered in 1996. We spoke to game developers who've put their own mark on monster-catching game design inspired by Pokémon.

The popular early access massively multiplayer online monster battling game Temtem draws clear influence from the Pokémon franchise (unashamedly so). Daniel Barba, lead programmer at Madrid-based Temtem developer Crema, said “The most important things are our differences [from Pokémon]." He noted how Temtem has two-vs-two battles, a stamina system, a hold system in which monsters can’t use certain techniques until a certain amount of turns pass, elimination of randomness, and decidedly different AI. 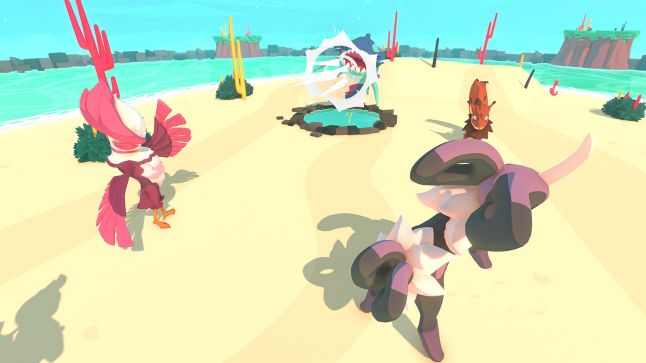 Temtem provides a space for the player to think more critically about combat by doubling down on two-vs-two battles. Although Pokémon originally implemented this feature in 2003 for Generation 3, it was never anything more than a larger Pokémon battle. On the other hand, Temtem crafts its entire combat around this structure.

Two-on-two battles increase the opportunity to introduce more strategy in combat, Barba said. “When you are two-vs-two, you suddenly have twice the options, and your rival [has] twice the options” which results in four times the possible outcomes compared to one-one-one battles.

Barba said on its surface, designing one-vs-one and two-vs-two battles is similar, “but it is in the design and balance of all the Temtem where the stakes really are.” An example of the variation that a Temtem battle can offer is a mechanic called Synergy. If a Temtem’s partner in battle has a specific type, the technique’s Synergy will boost its power. Although they’re subtle, features such as this can significantly shift the flow of a battle.

Similar to Pokémon’s passive Abilities, which grant perks in battle, Temtem features Traits. However, Temtem’s Traits are much more emphasized. Barba said, “The most challenging (and exciting) part of the battle system is the Trait system, which we have worked a lot in. It adds a lot of different combinations in the battles, being able to change the result of a battle even before it starts with a good or bad decision.”

Each variable that Barba and his team apply to Temtem is being thoughtfully considered. While Pokémon has heavily inspired Crema on their game’s growth, Temtem is evolving into a game of its own.

Monster Sanctuary is another collect ‘em all, developed by Germany’s Moi Rai Games. Its hook is that it’s a side-scrolling Medtroidvania with turn-based monster battling.

The monster collection and elemental aspects are where the similarities with Pokémon essentially stop, says Denis Sinner, founder of Moi Rai. “Besides the classical focus on Weaknesses and Resistances, we didn’t actually take much out of the Pokémon combat.

“Monster Sanctuary is more similar to classic JRPGs, plus some of our own ideas. Especially as there are three monsters fighting on each side," he said. "I think Pokémon’s combat is kind of a weakness for me, and it doesn’t offer much for strategic depth, being limited to a single monster on the field (for most of the time).”

Monster Sanctuary offers a combat approach similar to that found in more complex JRPGs. Monsters can be given gear that modifies their stats, and their growth is dependent on a branching skill tree.

Though more complex, Sinner feels this adds some much-needed depth. “We wanted to give the players more ways to customize their monster and add more strategy to the game,” he said. “You can come up with a lot of crazy synergies with all the skills available. This also adds difficulty to the game, as it requires you to understand those interactions. The downside of this is that you can easily make bad builds, making the game feel unreasonably difficult.”

Although some players may shy away from such challenges, Monster Sanctuary provides an experience that many of Pokémon’s older fans may be ready to face. Given Pokémon’s younger target audience, the series’ difficulty will sometimes be kept in check.

Sinner elaborated on the appeal of Pokémon: “I think the main draw to Pokémon is the part about collecting monsters. It is that you can get obtain all those monsters you fight and use them as your own.” With that, Monster Sanctuary honors the age-agnostic appeal of training your very own team of monsters. The game simply does so on its own terms, putting a fresh spin on the genre.

Monster Sanctuary is an excellent example of what happens when a genre grows outside of the games that helped establish it. When asked what traits define the monster-taming RPG genre, Sinner said, “monster-collecting, turn-based combat, adventure [and] exploration.”

Coromon is a sharp-looking monster-taming game from Dutch game developer TRAGsoft (i.e. “Two Ridiculously Ambitious Guys”). Due for release later this year, Coromon’s Pokémon influence is a little more than obvious, with nostalgic 2D art and animations that hearken back to classic Pokémon games on Game Boy Advance.

Jochem Pouwels, CEO of TRAGsoft and programmer on Coromon, noted, “the world-building, pacing of the battles, and discovering interesting new creatures are all part of what has made [Pokémon] successful for so long.” 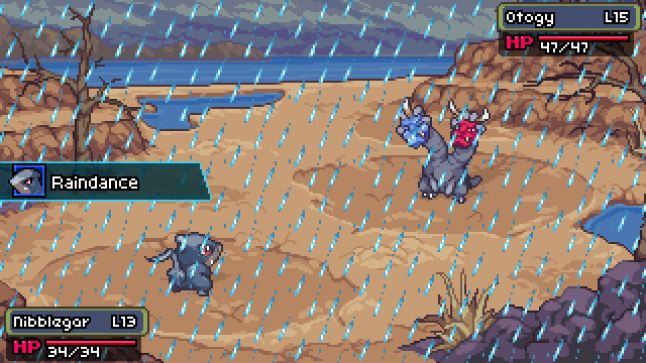 But while Coromon similarities with Pokémon games are fairly clear in both aesthetics and gameplay, there are differences under the hood. Pouwels said TRAGsoft has “closely studied every decision Pokémon has made along the way,” and questioned every aspect. That translates to new takes on familiar concepts, with Coromon introducing difficulty modifiers, transparent stat allocation for the monsters, multi-phased boss battles, and a new narrative.

On their journey to create Coromon, TRAGsoft was careful in how they studied Pokémon’s combat. “There are tons of things affecting each other in battles, and there are specific rules in the order things are handled. Analyzing how Pokémon achieved [its] game feel was challenging, rewarding, and interesting,” Pouwels said. “This resulted in us building a very flexible core battle implementation which can be extended with all kinds of rules, making it easy to plug in new mechanics and to make ourselves stand out from Pokémon.”

“The old rules didn’t really get in the way because these rules are what defines [Pokémon’s] unique game feel,” he said. “But the rules can be built upon to develop new and interesting twists like our Skill-only types and Stamina system, or we can include non-Coromon opponents, like a fusebox.”

Temtem, Monster Sanctuary, and Coromon each employ various aspects of Pokémon’s combat mechanics. Each of these games are examples of how flexible those core mechanics can be, offering a sense of familiarity while also introducing new ideas. This demonstrates that the monster-taming RPG genre is becoming much bigger than the Pokémon games themselves.