Jonny Hughes, one of theÂ developersÂ behind comedic ski lift-building game When Ski Lifts Go Wrong, talks with Gamsutra about the design and development of this silly physics puzzler.
Phill Cameron
Blogger
April 04, 2019

Wacky physics-based puzzlers are often super fun to not only play but watch, and Hugecalf Studios' When Ski Lifts Go Wrong is no exception.

This construction puzzler sees you making various ski lifts and then watching what unfolds. From bloody deaths to smooth rides, When Ski Lifts Go Wrong is a fun, yet challenging game.

Your goal is to build a good ski lift that brings every passenger to their final destination. Once you have your lift created in the build mode, you can watch the rides make their way to the slopes! If they all make it, you can become them, leading your riders into dangers or to the finish line. With the option to make perfect tracks yet so many chance to kill the skiers, When Ski Lifts Go Wrong is a game that’s sure to make you laugh.

In an email interview with Gamasutra (an edited version of which appears below) Jonny Hughes, one of the developers behind When Ski Lifts Go Wrong, talked in-depth about the design and development of this silly game.

Being able to build

When Ski Lifts Go Wrong is inspired by the bridge-building genre of games that came before it. We knew from the start that we wanted to take that well-used building mechanic, and to do something totally new with it. So that’s where we started. We looked at other great games such as Poly Bridge and World of Goo as starting points, but we wanted to create something that was better.

We wanted to create something that would allow the user to quickly and accurately get their designs from their mind in to the game, then easily modify them if they weren’t correct the first time around. It went through many iterations, and many rounds of testing with family and friends for both mouse and keyboard input and touchscreen. 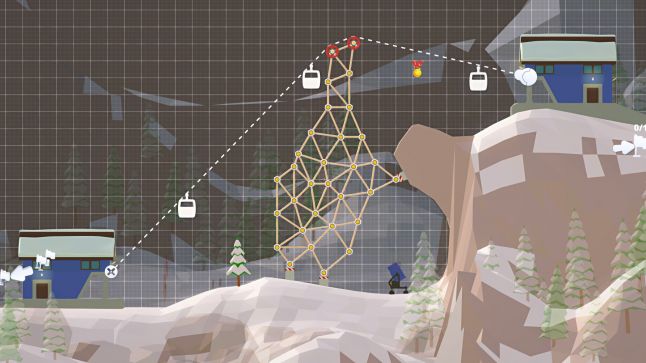 We are very happy with the end product; it has a lot more features included than we had originally planned! That being said, we still have a backlog of funny physics-based items that we would loved to have included for the release. In addition, it would have been great to spend some time creating an improved ski map. We would try to create better visual representation of completion and progress to create a journey throughout each world and to make each level feel more connected.

Finally, we would have loved to support level sharing on Nintendo Switch, but with the technical complications that surround it we do not think it was possible with such a small team.

Physics can sometimes cause things to explode

There were many things that we had to consider when designing the physical elements of When Ski Lifts Go Wrong that we weren’t aware of when we began the project! These include performance, balance, the limitations of PhysX, determinism, as well as some design choices such as realism vs. stylized puzzles.

We had to wrestle with the physics engine to bring the chairlift cable under control so that it behaved in a satisfactory and predictable manner. The cable is made up of hundreds of connected rigid bodies, something that PhysX doesn’t handle all that well. We discovered early on that the chairlift cable would very easily snap when we tried to add even the smallest amount of tension, causing an explosion that sent pieces of rope flying. 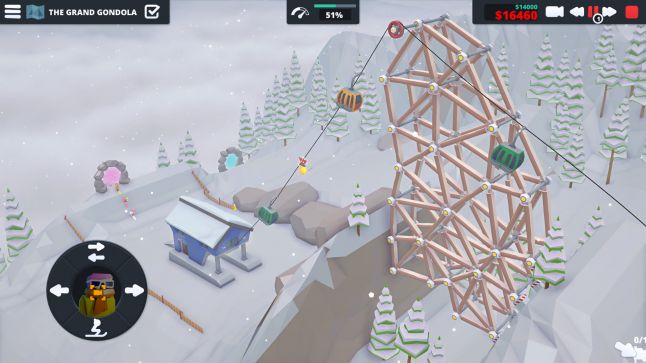 We set out on a journey of discovery and found that as we increased the number of physics calculations, the rope strength increased.

This was great, except it reduced the performance, and when you’re dealing with hundreds of rigid bodies this started to become an issue quickly. Another of the ways we were able to make the rope more stable was to significantly increase the mass of each rope piece. However, the additional mass caused the rope to droop more, which meant we had to add even more tension which meant the rope would again… sometimes explode! The result was more stable than previously, but still not satisfactory.

Eventually, we managed to find a solution that we were happy with that was a combination of lots of small changes that each had an impact. However, when we were finished creating something strong and stable, we ended up with a rope that was extremely heavy. This meant the initial bounce of the rope was far greater than anything that was experienced during the rest of the simulation, enough to break the structures that you had built, and far greater than the additional weight of the skiers that would ride the chairlifts… so we added in a time scale that would give the chairlift a moment to settle at the time of the simulation.

The ultimate goal was to find the right balance that would lead to the skier being the ‘final straw’ in a lot of scenarios. Ultimately, we wanted the chairlift to break while the skier was on it, rather than in the first few seconds of simulation. We managed this in the end, but we had to add additional rules to allow for this. 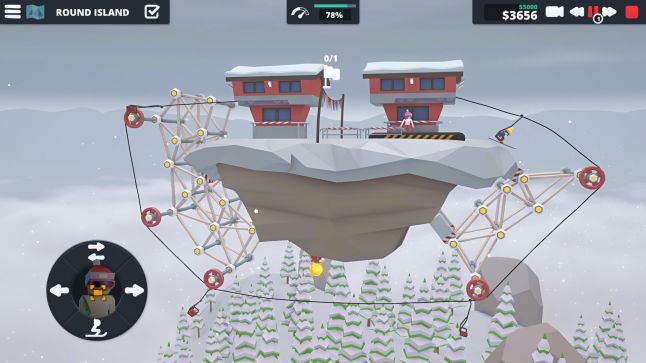 The biggest struggle was coming to terms with the fact that the game would not have deterministic physics unless we built our own physics engine. Deterministic physics is where there will be exactly the same out come every single time, no matter how many times you ran the simulation. We felt like this was an important factor for a puzzle game. A solution that works one time, should work the next right?

We did what we could to increase the likelihood that outcomes would be the same, but without totally eliminating variance. Instead, we chose to focus on the things that we could affect. We added in the ability to control the skiers, we felt like this gave the player the ability to impact the outcome once the simulation has started, putting some control back in the hands of the player, and away from the non-deterministic physics engine!

People have been very complimentary of the building tools within the game, saying that they are easy to use and intuitive… however, the thing people have been responding to more than anything else is the comedy that can arise at the most unexpected times.

There are many games out there that you can intentionally inflict pain and suffering to the characters, however, when it happens totally by accident, or is triggered by something as small as clipping skis on top of a snow covered tree, we have found that it triggers a pretty genuine response from a lot people. 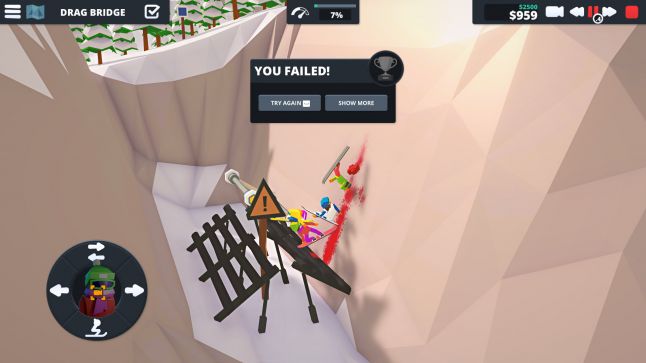 It's difficult to say if this brought more players in to the game. Most playthroughs on YouTube and with streamers were focused around the campaign levels. A lot of the players were potentially not aware of the sandbox until they had bought the game. However, when players did make their own levels, it provided a purpose to share their in game creations and experience with friends, which brought new players.

We always knew it was a funny concept, but never realized how entertaining it would be killing skiers. It was only really when we were making our first trailer for Steam Greenlight that we realized that we should make the most of the comedy this game can provide. Our most enjoyable moments during the development were when unexpected things happened, and it inspired us to lean in (by adding in blood and bins, for example) to the comedic side of the game.