How Exapunks dev Zachtronics finds the fun in hacking

"I'm kind of uninterested in the kind of hacking games where you just connect to stuff," says Zachtronics' Zach Barth. "I kind of think that hacking, maybe, is just like entirely about being cool."
Phill Cameron
Blogger
September 20, 2018

When Zach Barth was in eighth or ninth grade, he gave himself a hacker handle.

He had no idea how to actually be a hacker, but he'd seen the movie Hackers and he aspired to be like the people he saw there. With a cool hacker handle like "thekrispykremlin" — a name he plucked out of nowhere — he could at least pretend.

Nearly two decades later, he doesn't need hacker handles to pretend. He has games to do that. His studio Zachtronics makes games about optimizing systems, programming, and now, with its newest title Exapunks, being a hacker in an alternate-reality version of 1997.

I spoke to Barth recently about hacking and how it manifests — or doesn't — in Exapunks and Zachtronics' other games.

From aspirations to (not) reality

"I would say my hacker phase — when I wanted to be a hacker, not when I was one — would be like about when I was in high school," says Barth. He already knew how to code before that, but it was only in BASIC, so his hacker aspirations drove him to learn C++ and the basics of networking and web technologies.

In college his hacker aspirations morphed into game developer aspirations, and these he initially funneled into making a mix of "weird artsy game shit" and freeware engineering games that repurposed the computer theory he learned in class. (One of these, Infiniminer, notably became a key inspiration for Minecraft.) 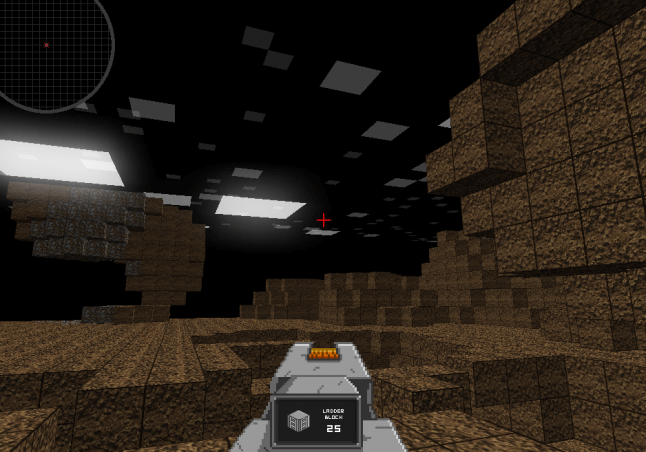 "I got out of college and started getting jobs not in the games industry because for some reason I thought that would be, you know, like, 'Oh, you don't need to work at a company that makes games,'" recalls Barth. "So I worked in an office but then I kept making games and so there was sort of a transition that then led me into making games [professionally]."

The game that kicked off his career as an indie developer was, fittingly, a game about hacking electronics. Ruckingenur II got covered on Hackaday, drawing in thousands of technically-minded fans who would then form his core audience for his (and later his studio's) commercial efforts — none of which, prior to Exapunks, are about hacking, but all of which inadvertently capture some of the old hacker ethic.

Just like the hackers from the mainframe and early personal computing era, Zachtronics fans love to not only solve technical puzzles but also to optimize these solutions, over and over again, each time shaving a few more cycles from a program or state machine. And the ingenuity encouraged by their games emboldens some fans to go even further — to take control of the systems presented to them and do what they want with them.

"I'm kind of uninterested in the kind of hacking games where you just connect to stuff. It's the same complaint people make about our games, I guess — I use the command line on a daily basis. It loses some of its allure."

Barth mentions that one guy hacked into the SpaceChem binary and figured out how to make patches to add new features, for instance. "Our players build really cool things," he says. "A lot of the coolest things I have nothing to do with — like somebody built a simulator for TIS-100, which is one of our games, in Infinifactory, which is another one of our games. So you could like play TIS-100 in Infinifactory and it's like, wow! Like I didn't even know you could do that."

With Exapunks, Barth wanted to draw more deeply on hacker culture as an influence. But not in the way you might expect. "I'm kind of uninterested in the kind of hacking games where you just connect to stuff," he says. "It's the same complaint people make about our games, I guess — I use the command line on a daily basis. It loses some of its allure."

Where most hacking games embrace Hollywood-style hacking, full-bore, with some whimsical puzzle solving to break-in to a system, whereupon magic happens with barely any additional effort, Zachtronics took a different direction.

At the root of this difference lies a change in focus from authenticity to emotions and aesthetics, and specifically to the emotional resonance, aesthetic style, and general weirdness of 1990s cyberpunk.

The core gameplay loops of Exapunks may revolve around programming robots to do stuff, but Barth says Exapunks was not conceived as a programming game. The idea, rather, was to capture "the holistic emotions of wanting to be a hacker" in the late 1990s.

"I didn't even imagine the fantasy well enough," he admits, "because I wasn't that imaginative. But with the power of five people, we've been able to imagine this thing that's — I don't know, it's like hyper-real." 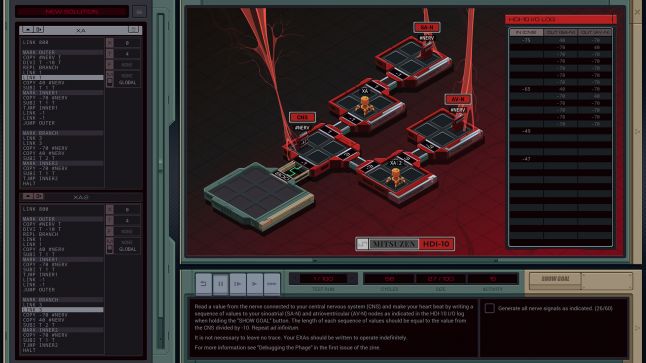 Exapunks plays into '90s cyberpunk exaggerations of hacker culture as portrayed in magazines like Wired, in comics like Transmetropolitan, and in edgy teen sci-fi novels — I've long-forgotten the names of the books I read at the time that it reminds me of, but Barth cites Tom Clancy's Net Force Explorers as one such series that inspired them. "I think ours is very much like the mundane version of a lot of that because a lot of people writing that stuff didn't show a lot of restraint," he says.

Exapunks is about capturing the exuberant vibe of '90s hacker fantasies, and it does this not only through its mechanics and in-game story and art style but also through its pseudo-manual, the hacker zines that players can print out themselves and read — complete with tutorials, ads, op-eds, features, and the mix of conspiracy theories and idealist proclamations you'd expect from an underground computing magazine. 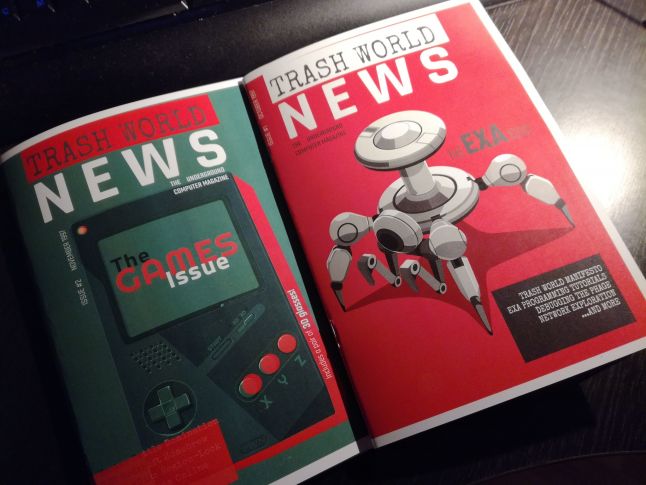 The basic concept for the zines draws on a hacker magazine Barth read in high school called 2600. "I used to head down to the bookstore and buy it every couple of months," he recalls.

"It felt kind of transgressive to be buying this magazine filled with like dangerous hacker information or whatever, and like weird opinions, and it was the first time I ever encountered the '9/11 was an inside job' meme because it was filled with like paranoid ramblings and stuff."

All about the payload

Despite their detailed recreation of the emotions and aesthetics of this 90s hacker fantasy, however, Barth is quick to point out that Exapunks is a long way from the reality of hacking — then or now.

"I'm afraid the gameplay in Exapunks is no one's idea of hacking, including hackers," says Barth. He actually went to the long-running hacker conference DEF CON last year as research for the game, to learn more about real hacker culture, he explains, "as opposed to stuff that I imagined when I was in high school."

While there, he pitched Exapunks to some Zachtronics fans he met. They thought he was insane. Real hacking is about finding an exploit — a vulnerability — in a system and then figuring out how to leverage it to do something it wasn't designed for. The main challenge, and the appeal, lies in finding a way in. "But Exapunks notably omits that entirely," notes Barth. 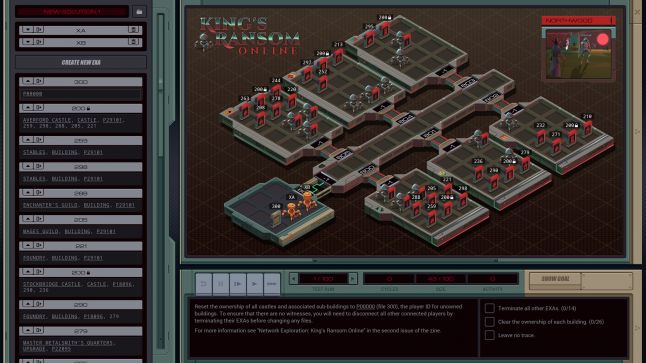 "Like you just have access. You fire up a puzzle, you have access, and you have to write the payload and make it do something. And I pitched this to actual hackers at DEF CON and they're just like, 'Why would I play a game about just writing a payload? Like that's not the interesting part.'"

"Use mechanics to tell players how things are — that's like my style of design."

"It's like really like intense spy shit," says Barth. "I thought that was super cool — the idea of, you know, it's not just about the exploits but that once they have the exploits, they were able to use these exploits to unfold almost like a sort of like reverse origami. It just unfolds from this little compact form into something that fits into a specific network and makes the network do something that it was never intended to do."

And so it is in Exapunks, where players write instruction sets for robots called EXAs (short for Execution Agents) to propagate across networks, trash server files, and hijack computer systems in its alternate-reality 1997. And battle against other human players' EXAs in bouts of robot war, and turn into the objects in homebrew games the player writes for a knock-off Game Boy system. And just generally do things that sound cool.

"I kind of think that hacking, maybe, is just like entirely about being cool," suggests Barth. "Like that if you put hacking in a game — I'm thinking like System Shock. If you get your hacking skill up, you can hack your gun and side-grade it or hack a vending machine and instead of paying for stuff that gives you health, you can just get it out for free again."

"But like meanwhile you wasted all your skill points on hacking. So you probably could have put them into something that actually made you more effective at the game and actually made you more powerful," he continues. "But instead you choose to put all your skill points into hacking because it's fucking awesome and it's kind of just a cool thing." 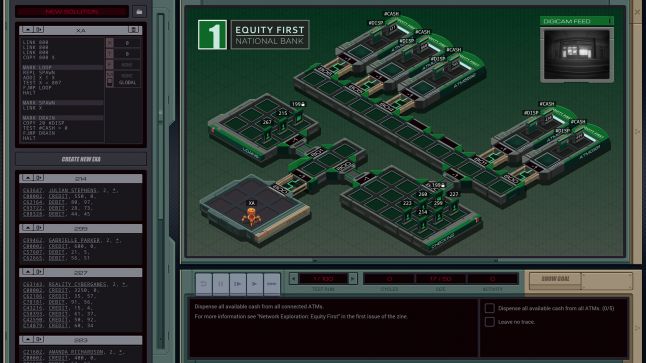 With Exapunks, Zachtronics tried to take that coolness of hacking and turn it into actual game mechanics. "I'm a very like mechanics-driven designer," says Barth, "and so for me one of the best ways to add flavor to a game environment is to add mechanics that create that flavor. Rather than just saying like, 'Oh, hacking exists,' let somebody hack, and even if it's not mechanically powerful, have it tap into the mechanical systems so that you change the stats of the weapons by hacking it or something."

"Use mechanics to tell players how things are — that's like my style of design. And I think hacking really works well with that. So even if it's not a thing where you're hacking to make your character more powerful, it manipulates and it takes place inside the mechanical aspect of the game, which I think for a certain kind of game player is very cool."