Novarama director Dani SÃ¡nchez-Crespo tells us about Killsquad, a co-op action RPG that jumped to the top of the Steam charts in recent weeks.
Phill Cameron
Blogger
August 02, 2019

It turns out that if you cleverly combine major elements of Diablo and Left 4 Dead, you may attract some attention.

Novarama's Killsquad is a Steam Early Access action RPG that debuted at the top of the Steam charts last month and got major traction on Twitch as well. The game combines ultra-fast shooting and slashing with RPG tropes like character progression, within a co-op framework.

Novarama director (and one-time Gamasutra contributor) Dani Sánchez-Crespo told us, "The key idea for Killsquad was, can we do something that feels similar to an RPG, but that you can really enjoy in shorter bursts? What started like an intellectual design challenge turned into a game where we blend techniques we have learned through the years, and channels influences from Heroes of the Storm to Left 4 Dead or Diablo."

Sánchez-Crespo answered more our design and development questions about the action-packed Killsquad.

On its surface, the basic twin-stick action gameplay of Killsquad harkens back to other RPG/action games like Diablo, and ultimately to Robotron: 2084. Where does Killsquad improve upon its now-ancient forebears? 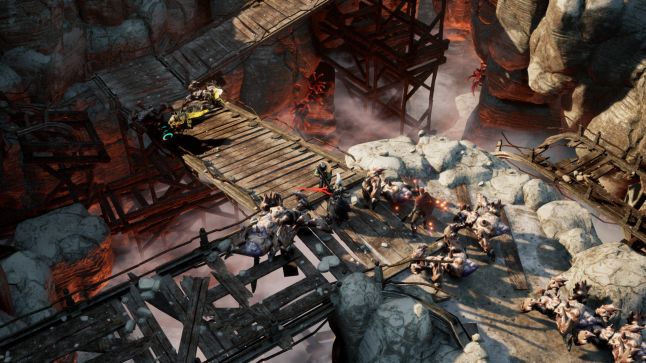 I’m old enough (45) to have played Robotron, Smash TV…so many classics paved the way to us. We feel in the end there were two “routes” designers generally followed to do these kinds of games: on one hand, the classic RPG genre, with examples such as Diablo, Fallout, Baldur’s Gate, where you invest long periods of time to see your heroes slowly evolve.

On the other end, you have the frantic twin stick shooters such as Smash TV, which feel more like an arcade experience. What no one had thought before is, there’s a space in between those two, of games where you can enjoy fast paced action like in a Twin Stick Shooter, with RPG-style progression (similar to Heroes of the Storm, for example). That’s Killsquad. We like to say it’s the RPG you can enjoy in 30 minutes.

Part of the core tension in the design of all action RPGs is the line between skill and stats. How far can a level 1 character get? Is a max-level character invulnerable? Are there statistic-based miss chances, or skill-based critical hits? Where does Killsquad draw that line?

Killsquad, being an action game, is first and foremost skill based, in terms of animations, timing, windows of opportunity, dodging mechanics, etc. So our battle system is less D&D and more Doom, so to say. Then on top of that we layer a classic RPG class and progression system, so those skill-based actions are unlocked as in an RPG. We reached this formula via heavy playtesting, and so far we are very happy with the reception so far.

Killsquad evolves with the player. We’d say that, as a starting player, you’ll encounter the skill-oriented layer first. In your initial missions, being good with controls is what is going to make a difference. Then, as you progress into the game, you’re going to unlock permanent benefits through an upgradeable weapon and gear system, which is more like in a classic RPG: here, specific weapons give you specific benefits which do not rely on skill so much. So configuring your equipment, and investing into improving it, is going to make a huge success on your chances of success.

Killsquad has some interesting and welcome player aids: some enemy attacks have red fields on the ground showing where their damage range is, projectiles are shown brightly in a way that sticks out, and walkable terrain is, for the most part, easy to pick out. What prompted these easily-readable tells? Was there any fear that they'd make the game too easy?

Here at Novarama we playtest a lot, and the red threat areas are part of that process. Every top-down game is in the end an exercise of spatial patterns: the way your hero moves causes spatial changes, different enemies occupy space in very different ways, and the arena changes at a certain velocity, so your goal as the player is to know where to place yourself at all times. So, in that respect, Killsquad has a lot of Capcom’s classic 1942: forecasting where each game object will move in very little time, and reacting accordingly under pressure.

We felt that, especially at the pacing of our game, the red areas were very useful. They do make the game more accessible, but on the higher difficulty settings the game is still very challenging as you need to be controlling more elements at once.

In fact, on higher levels of difficulty the red areas can be used as a design weapon to make the game harder: if they weren’t there, we would be concerned about putting too many enemies or too much pressure on the players. As we do have red areas, we can always rely on players seeing those, and avoiding them. And, because of that, we can spawn even more enemies. 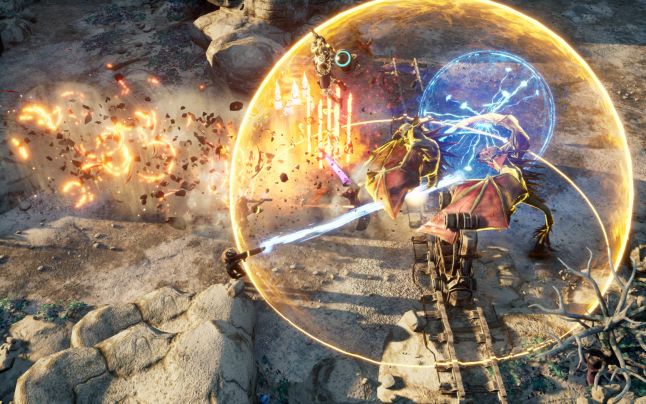 It appears to me that Killsquad attempts to meld MOBA-style, each-map-is-a-game concepts (fewer maps, intense action, starting from level 1 with each map) with a more traditional PvE action RPGs like Diablo (advancing through terrain over the course of a map, skill trees, bosses, equipment as progression). How accurate would you say this is?

You are spot on. The reference we use, and few people see, is Left4Dead. I know the camera is different, but that was a game we discussed a lot while designing Killsquad, from the procedural map generator, to the AI Director that is analyzing the player behavior to generate interesting challenges to the party of heroes.

In that respect, we are now working on the concept of “career paths,” so we can offer persistent progression to each hero as you do more missions with him. So the heroes will still have in-session progression as currently implemented, but that will have a second layer of complexity in the form of a career which you will slowly unfold as you play more and more with each one of your heroes.

Characters start each map at level 1 and advancing through to level 10 throughout, letting players explore different branches of the skill tree each time and customizing their abilities for the mission they're on. Was there any fear that this would be repetitive? How do characters advance between missions?

Well, being an Early Access, we wanted to get the core experience spot on, and grow from there. We feel we have succeeded in that respect. We’re now expanding the game to make it bigger and more varied.

I’m 45 now, having spent 20 years in this industry (starting as a writer for Gamasutra!). Many times I see games which are big, but badly planned. We wanted to go small but well executed, and grow from there once the concept is proven.

For example, we’re now analyzing the skills people choose the most, to re-balance the game and make sure the decision of which skills you use is as meaningful as possible, and also is more tied to specific types of contracts: maybe a contract favors a skill tree progression, while a different contract needs a whole different choice of skills. 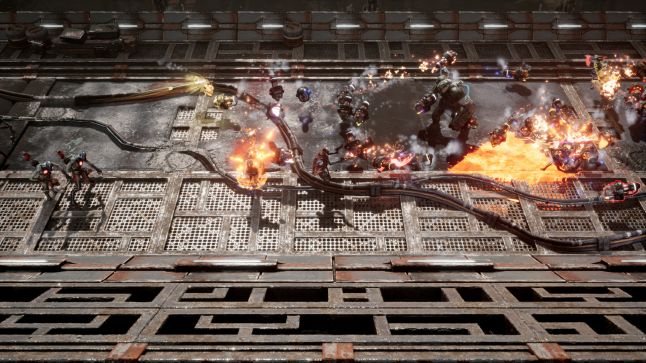 Some players have complained that play rewards come more in the form of getting crafting materials and currency than explicit randomized loot, even though it means the can buy and/or make what they want rather than sell a ton of what they don't. What is your design thinking behind this?

You are absolutely right: we prefer the player to choose what they will be spending their reward on. Choice is something you can never take away from the player. As Sid Meier used to say, “a game is a series of interesting choices,” and spending your loot in whatever way you see fit is one of them.

I feel what our audience really wants is more types of rewards, so the game feels bigger, deeper, broader. You look at games like Path of Exile or Diablo and their inventories are immense. I’m happy to say that, thanks to our initial success, we’re now producing a ton of more art, from collectible character portraits, weapons, hero skins…you name it. RPGs have always been about amassing cool treasures, and Killsquad is going to get those soon.

Killsquad has been worked on for a couple of years, and is now in early access; where does the game go from here?

We did publish our roadmap, which you can see here. As you can see, we’re going to do four major updates this year, to make the game much larger. New heroes, new game areas…I think we now have over 280 pieces of art in production. That is the benefit of a strong first week: it makes wind blow strongly in our sails and it pushes us harder to create the game our fans deserve.