How 1979 Revolution: Black Friday drops players into a real crisis

Navid Khonsari was a child in Tehran during the Iranian revolution. Now, he's turned that tumultuous chapter in history into a game that puts players in the midst of the chaos, rivalries, and bloodshed.
Phill Cameron
Blogger
April 11, 2016

Navid Khonsari was a 10 year-old in Tehran during the Iranian Revolution. The country’s pro-Western Shah was overthrown and replaced by a fundamentalist Ayatollah, who declared Iran to be the world’s first Islamic state.

It was a time of rapid change that at first seemed promising to many. But it quickly turned into something tumultuous and terrifying.

“My mom would scream to get down, because the soldiers are shooting into the air,” Khonsari recalls. “There was fear in her voice. Any hope for change had dramatically shifted.”

Khonsari is the developer of 1979 Revolution: Black Friday, out now on Steam, which is set in the midst of this revolution. Players control Reza, a young Iranian photojournalist who’s spent the last year abroad in Germany. He comes home to Tehran, only to see his homeland being ripped apart by a scary—and at times, bloody—upheaval.

Players quickly get the sense that Reza has no good options. And every choice he makes in this turbulent city affects his friends and family, as well as his own safety.

As Reza, which side do you take? Do you join the opposition or not? What role do you, as a young Iranian familiar with the outside world, play in your home country’s revolution? A passive one, or a violent one? 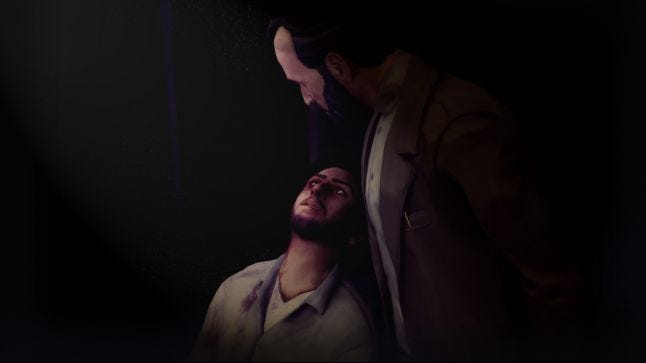 Moment-to-moment gameplay is somewhat like a Telltale episodic adventure filtered through a very dark chapter in history. Early on, Reza is captured and interrogated by an anti-Shah prison warden (who is based on a real person). He offers Reza a cup of tea. Players can accept it, or refuse—but to refuse is a cultural indiscretion in Iran. If Reza refuses and knocks the cup on the floor, text in the corner of screen flashes. The warden won’t forget this.

At another point, a group of anti-Ayatollah youths try to start a fight with Reza and his childhood friend Babak, who is decidedly pacifistic. The gang calls Reza “a punk with a camera.” You can fight them or not. If you don't, the game tells you: “Babak won’t forget this.”

Later, Reza’s in the midst of a heated conversation between Babak and Reza’s cousin, Ali, a committed revolutionary who thinks the time has come to turn to violence. Do you side with your flesh and blood? If you do, your new radical agenda will distance your from several key characters in the game. 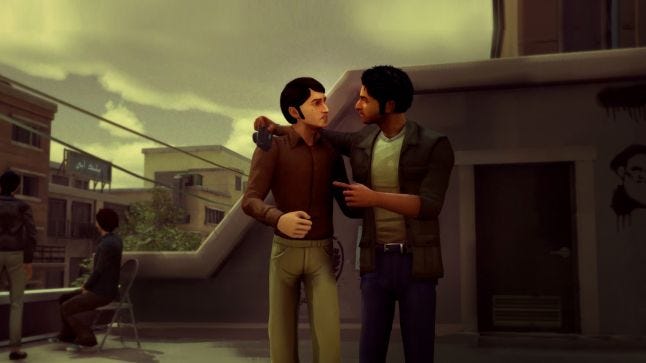 Khonsari wants players to wrestle with the gray areas, just as real Iranians were forced to do during the revolution.

His game started as a Kickstarter back in 2013, but donations gave out around $90,000 short of its $395,000 funding goal. Khonsari and his team eventually found backers that got the project off the ground.

Khonsari spent several years with Rockstar Games, directing motion capture and writing dialogue on games like Alan Wake, Max Payne, and the Grand Theft Auto series. But he is a filmmaker by trade. His studio Ink Stories is also working on documentaries, graphic novels, and narrative feature films. So why did he want to create a game about the Iranian Revolution, and not a movie?

Khonsari says that while film can definitely brings stories to life, they’re more of a passive, fleeting experience; you watch the movie, and you may talk about it with your friends the next day, but then you’re done. He believes that 1979’s audience will be given far more responsibility—and feel far more empathy—as they’re put in the shoes of Iranians on the ground. 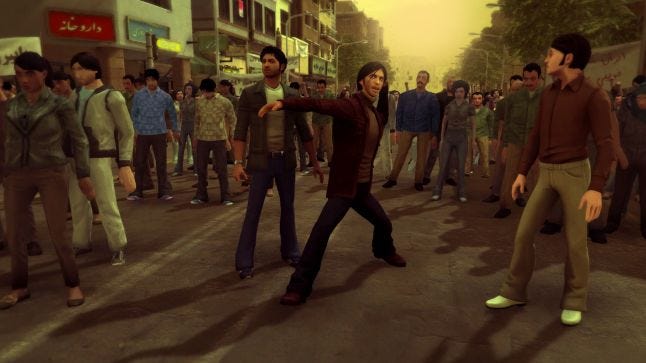 The game incorporates other people's memories as well as Khonsari’s. The 1979 team interviewed a group of 40 Iranians of all ages and social classes who were actually living in Tehran during the revolution.

The look of the game is literally made up of real snapshots of the era. At one moment, players see actual family photos in a room that the they're exploring. Other settings pull from indelible images taken of massive protests or group prayers that were taken by real photojournalists, or from graffiti that actually existed on the streets of Tehran during the revolution.

Khonsari thinks video games are the perfect way to put players in those sort of challenging situations that have no clear, conventionally heroic decision. And he aims to show that games can make history come alive, too.

“You’ll understand how your choices have an emotional impact on those around you,” Khonsari says. “At the core of the most popular games or AAA titles, there’s an element of overcoming: Get to the next stage of level. It’s great, but we can expand beyond that, and navigate reality and choices and characters that are neither good nor bad.” 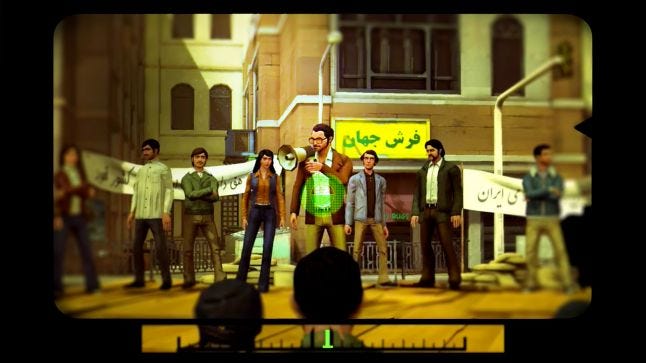 “Games are, hands down, the hardest experience to try to create,” he says. “I’d love to see more developers go down this path. But I really think the core of it is putting yourself into the experience.”