Here's a deep dive on the first 30 minutes of Marvel's Spider-Man: Miles Morales

You never get a second chance to make a first impression. Here's how Insomniac Games made sure their take on Miles Morales landed with a smash.
Bryant Francis
Senior Editor
July 21, 2021

But with the character already having a moment in the limelight with the film Spider-Man: Into the Spider-Verse, it was going to take a heck of an introduction to make sure players connected with this version of Miles Morales, especially after spending hours with Peter Parker in Marvel’s Spider-Man.

In their GDC 2021 talk, Insomniac Games’ Ben Arfmann and Shane McCloskey offered a deep dive into the opening 30 minutes of Marvel’s Spider-Man: Miles Morales, to explain how the narrative and designed teams worked together to introduce both a new character and new mechanics, and make sure they’d walk away thrilled and wanting more.

“Opening missions are pretty tough,” McCloskey explained. “The first thirty minutes of a game are important to see if players are going to stick around for the next five, 10, or 50 hours.”

He explained that this narrow slice of time has two important roles: laying the narrative groundwork for the rest of the story-driven adventure, and introducing core gameplay mechanics that will lay the foundation for the next 40 hours of play. “It’s really easy to get lost in the weeds of things,”

The version of Miles Morales’ opening that shipped differed drastically from an earlier prototype. In both versions, Miles is chasing down classic Spider-Man villain The Rhino after he escapes a prison convoy.

Here’s some of the key examples the pair gave about how the sequence evolved from beginning to end.

New York, I Love You

Arfmann began by laying out his first challenge: explaining Miles Morales’ initial characterization. A lot of Spider-Man: Miles Morales is anchored on the character’s relationship with the residents of his new neighborhood: Harlem.

“We often refer to this as a love story,” he said. “Miles and Harlem start at odds, gradually discover things they loved in each other, and by the end of the game, they’re thick as thieves.”

Playtesters apparently were attached to this arc, but didn’t like where it started. A first pass on the opening mission had Miles wandering through Harlem like he does in the shipped game, but in this prototype, his relationship with Harlem is far more antagonistic. He’s clashing with the locals, almost getting hit by a car, and complaining about how is old home in Brooklyn was better. 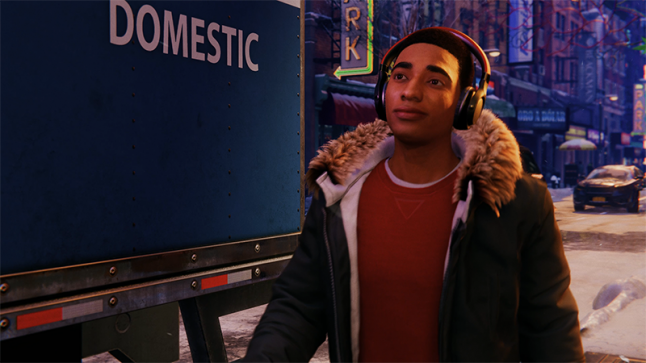 “It left us with a pretty big problem,” Arfmann said. “Miles wasn’t very heroic, and his neighbors in Harlem all seem like jerks. If Miles didn’t like Harlem, why should we?”

The solution? “Friends you haven’t met yet.” The team kept Miles’ opening walk-and-talk through Harlem, but instead of giving him the “I’m walkin here” experience, they dropped questgiver NPCs in as strangers who just don’t know Miles yet. Miles is gracious, helps with some small chores, and his neighbors respond in kind.

After Arfmann wrapped up with a quick breakdown of clearing out an excess of exposition in the intro, McClsokey took over to explain the gameplay pacing struggles the team faced.

The setpiece was always fairly locked in place: Miles would chase The Rhino through the city streets and clash with him at a Roxxon power plant that would knock out power to all of Manhattan.

Part of Rhino’s rampage would take him through an indoor shopping mall, taking players off the streets briefly as they ride him like a bucking bronco. It was dubbed “Rhino Rodeo.”

“The problem being, while everyone was focusing on Rhino Rodeo in the mall, the core chase out in the city really fell by the wayside.”

McCloskey said outside the mall, Rhino was just pounding down empty city streets and occasionally clipping a building, not showing off his character or Miles’ abilities. The first attempt at a fix was expanding the Rodeo setpiece to the open city streets. 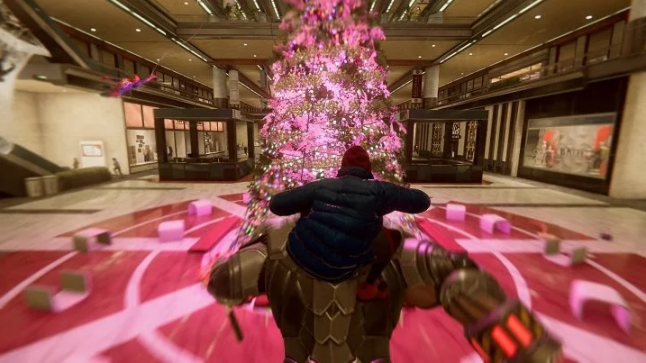 In a video of this prototype, McCloskey pointed out that by leaving this sequence in the dynamic open world, players would just skip key setpieces because they could just swing around them without losing speed.

“This all actually just made the chase worse,” McCloskey said. “Miles riding Rhino was overstaying its welcome, and it spoiled the mall sequence.”

He took a minute to call out how the design team needed to have some long conversations about this decision, and how it went somewhat against the grain of many designer instincts. Rhino Rodeo was cool, so more Rodeo had to be cool too, under some kinds of design thinking.

But Spider-Man isn’t a rodeo game, it’s a traversal game with a chase setpiece—a small flavor bit was at risk of outshining the rest of the game’s strengths.

McCloskey later called out that the Rodeo mechanic even got too much attention in the Mall setpiece. It wasn’t supposed to be a mechanic players needed to master, it was a quick moment meant to feel intense and filled with danger, more for the civilians than Miles himself. Scaling it back here helped retain that feel and kept the chase’s energy up.

Rhino Rodeo was yanked from the open streets, and the overall chase path was shortened. Setpieces like Miles zipping through a building became mandatory, and more dynamic events would show up.

Now, the mall wasn’t the only cool part, and the mission evolved into a fuller, more  dynamic chase.

From bug to boss fight

McCloskey and Arfmann labeled this challenge as one that hit both the design and narrative teams. At the end of the mission, Peter Parker is nearly killed by Rhino, Miles discovers his new lightning-based powers, and steps up to go toe-to-toe with Rhino. The first problem: it was too funny. An early prototype showed Rhino on the verge of destroying a major power plant, Peter Parker on death’s door…and Miles and Pete joking every 5 seconds.

“This was on-brand for Spider-Man, but if Miles and Pete didn’t take the situation seriously, players wouldn’t either,” Arfmann said.

That shook out in playtesting too. Players didn’t think Peter Park was actually in danger. It took a subtle tone adjustment across the whole adjustment, and reigning in Peter Parker’s jokes to begin adjusting player’s moods.

McCloskey said that the original wrap-up for the mission “fell pretty flat.” There initially wasn’t a boss fight, Miles would just discover his powers and zap Rhino in a cinematic, then take on some generic goons. This initial choice was because of a Rhino boss fight being developed for act two, and the team was nervous about spoiling that experience.” 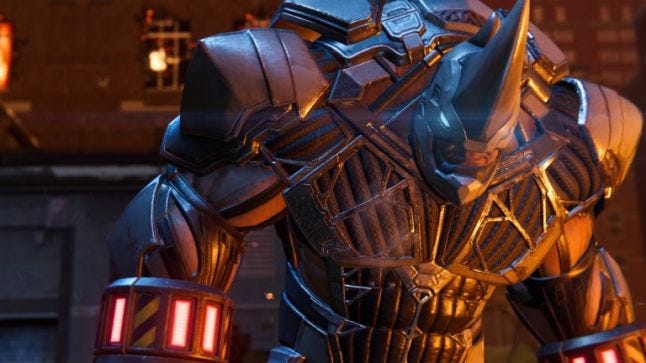 “It took a long time for us to come to terms with this,” McCloskey admitted. The team began to be convinced when animator James Ham encountered a bug. The cinematic the team had made where Miles one-hit KO’d Rhino played out…but then Rhino got up and attacked the player anyway.

It was a normal bug for game development, so much so that McCloskey even went “it’s a bug, mark it and move on,” but Ham pushed back with a simple “is it though?” and the team began realizing the value of an early Rhino boss battle.

It took a lot more work to create the full boss battle (and even involved some redemption for the Rodeo mechanic), but McCloskey said that Ham pointing out the Rhino bug got the ball rolling on designing the fight.

And with players now going tete-a-tete with Rhino, players began to feel like they were actually saving the unconscious Peter Parker, and that the baton had been passed from one hero to another, from game to game.

Afrmann and McCloskey’s excellent talk will be available later on the GDC Vault, but if you’ve got a GDC pass, you can watch the full archive over on the Swapcard platform.