What are the top nine steps to building a great-paced video game? Former EA and THQ design director Lopez details them for Gamasutra in this in-depth design feature.
Mike Lopez
Blogger
November 26, 2008

[Former EA and THQ design director Mike Lopez continues his analytical series by looking at pacing in games versus films and TV, explaining how careful planning can produce a perfect intensity curve for games.

Continuing from his previous installment, Lopez sets out nine fundamental points that will allow you to developing an Intensity & Pacing Plan for your game -- a document that will help you craft a game with consistent, entertaining pacing and reduce wasted work.]

I am continually surprised that many game developers in this day and age still utilize a very old-school, haphazard on-the-fly method of level design. When questioned, they argue they can produce a quality campaign with this technique.

The reality, however, is that the cost of continually reworking levels and missions until a user-appealing structure is realized is extremely prohibitive. Ultimately the end results will always be a rougher progression that falls far short of a riveting experience.

Because both film and TV have the luxury of significant extra film footage, and the flexibility of editing, these linear mediums have the advantage of relatively quick changes to pacing which is quite effective, but these are luxuries that are not available to the interactive nature of games. The only way to get there efficiently is to plan ahead.

I myself have worked on and with many highly experienced and talented teams (Road Rash 3D, Bond, Scarface, Baja, etc.) in the past who, due to a rushed or arbitrarily-ended pre-production, first generation engine/tools woes and/or over-confidence thought their situation was different -- only to end up throwing away almost all of the missions, levels and/or courses deep into production. The level/mission production team then had to start over on a massive body of work with only a fraction of production time remaining.

I only wish those projects could have benefited from these freshly-solidified processes. These talented teams have always regretted the time and cost of throwing away work, and the level/mission production teams have all had to scramble to get the new content built with often too little time left for adequate iteration and tuning, making the quality suffer further.

Even world-class teams with vast resources like the BioShock team (2K Boston/Australia) suffered through the cost and pain of massive throwaway (in their case, I believe all of the missions were entirely redone in the final nine months, and I suspect much of the level layout and content was redone as well).

The cold, hard lesson we must all see is that teams that over-confidently think they can avoid those mistakes using old-school, on-the-fly level design methods are destined to repeat the same highly costly content throwaway mistakes that much of the industry has been making for at least the past 10 years.

For the top high-profile titles of today, that throwaway easily translates into millions of development dollars wasted (enough to probably implement every design feature from your wish list) and often results in large delays and costly ship windows missed. It is time we all stop repeating the same unstructured level process mistakes and learn to utilize pacing and intensity processes like the older, more experienced, and more efficient entertainment industries (film and TV).

As these three bodies will encompass the bulk of design production, they must be led by one of the senior design leaders (ideally the creative director, lead designer, or lead level designer) and also monitored and supported by all the key design leaders.

1. Brainstorming. Assuming the team is not locked into a precise level sequence (e.g. a movie recreation), get the entire development team together ideally for a full day Pre-Production Kickoff off-site to brainstorm (note that with a second day off-site, the team could further work on design/tech/art goals, IP goals, production processes, and pipelines).

2. Prioritization. After the group brainstorming session, consult the team leads for task/time guesstimates to each location and event. It may take the leads a week or so to distill the major tasks, meet with key team personnel, and determine better estimates.

3. Story Framework. Figure out the high-level story and campaign sequences (separating out the cutscenes from gameplay) that will provide the best experience. Skip the details and dialogue, and just do a high-level outline of the plot points and how they pertain to each location, along with a high level of mission objectives.

4. Level & Key Event Sequencing. Using the top bang-for-the-buck action event ideas, have the core creative team do a different rating in terms of perceived intensity (just vote on which concepts seem more intense and rate them on a relative scale of say 1-10), then order the events into a table of increasing intensity.

[Note that your relative scale may need to be wider if you are planning a large number of levels, but this makes it harder to manage. It is always a safer development practice to focus on a smaller number of environments that can be polished to a higher level of quality.] 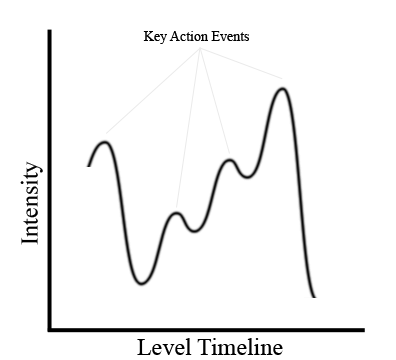 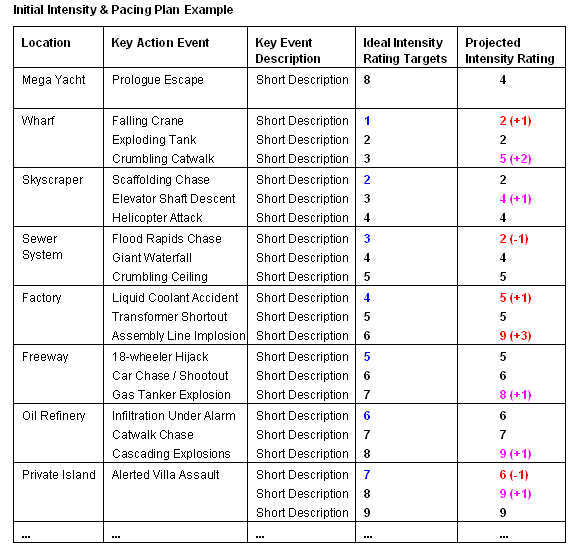 5. Plot-Specific Events & Intensity Lulls. Take the key plot points from the story outline and rate the perceived level of intensity on the same relative scale as the event ratings.

Dialogue-heavy plot events will fall in the low intensity category, and will contrast quite nicely with a scripted action event when placed just before or just after. List the plot-specific event table in chronological order, but initially keep it separate from the generic event table.

6. Time Metrics. In a new column set some time metrics for each level so you know roughly how far apart each action event should be in time. 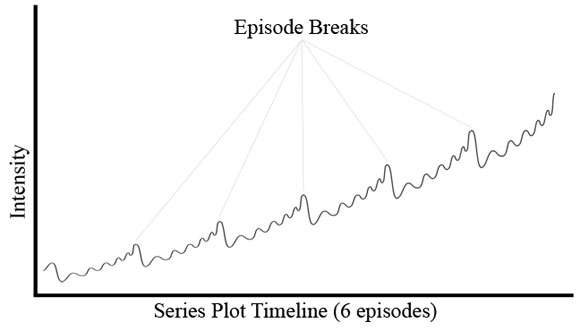 7. Top-Down Trend Evaluation. Step back from the levels and view the distribution of intensity from one level to the next over the entire campaign, both in the Intensity & Pacing Plan table and visually through the graph of the data. 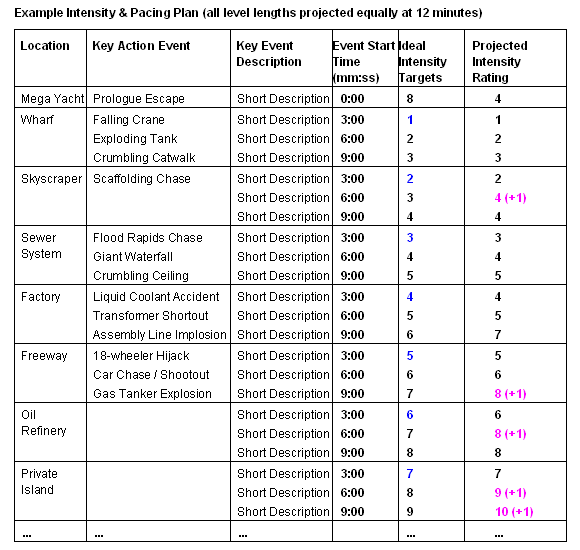 8. Initial Level Construction. Now, the level designers or world builders should proceed with the initial level construction, using the target specifications and framework from the Intensity & Pacing Plan finalized in the previous step.

9. Review & Iterate. Throughout level production, the creative leaders and team leads must review the in-game levels and compare them to the Intensity & Pacing Plan targets and trends. They must then schedule appropriate time for the levels to be iterated on in order to adjust the events to come closer to the targets. These reviews are also the best time support and ensure the accuracy of the Gameplay Progression Plan.

Ultimately, the value of building an up-front structure to the game campaign will always produce a more satisfactory result in significantly less time, with less work thrown away. Once a game team has completed a game using such a structure and realized the quality outcome, there will be zero desire to return to the on-the-fly archaic methods of the past.

With such a structure in place, the quality of the experience will increase significantly. Yet there will still be an ample creative space in which the level designers and/or world builders can operate.

This refutes a common fear among the uninitiated who are resistant to such a process change. The structure imposes high level events and timing only and leaves the bulk of the details up to the level designers and/or mission scripters in both the design and implementation stages.

It is also imperative that all the level designers, world builders, and/or mission scripters who are responsible for building gameplay be a part of the creative team that lays out the Intensity & Pacing Plan