I’m Javi Cepa. I started Pixelatto five years ago as a one-person independent studio in my basement with the goal in mind of becoming a small independent studio. The first few years, it was almost 100 percent freelancing for third parties, but eventually I managed to have enough income to hire some programmers to help me and dedicate part of our resources to start our own products. Every year, we've moved one step forward towards full independence, increasing the income percentage for our own products, and depending less and less on third parties and contract work.

We started creating stuff to help developers and designers make cooler content for their games with different tools, assets, and software apps. And a year ago, we decided to take the leap and develop our first game, Reventure. The launch surpassed all our expectations and has finally turned us into a 100 percent independent studio (no more contract work! yay!).

What: The 100 endings of Reventure

I love game jams. I've been making small games for jam competitions for more than nine years now, and still love to participate whenever I can. I especially love Ludum Dare. The original concept for Reventure was born in one, and scored third place among thousands of entries. That was definitely the push that convinced me to give it a shot as a complete project.

The jam game was a short story with only six endings and people loved it. At that time, I thought "If I could do six endings in 48 hours, I wouldn't have a hard time making 100 different ones and blow everyone’s minds!". Well, I did have some hard times (100 is a really big number) but it was totally worth it.

In the early days of the Reventure alpha, it "only" featured 50 endings and was not even close to the experience it is today.

It was available through Early Access, and we started gathering a great deal of feedback from comments, but the most valuable ones came from watching streamers play it, especially if it was a 100 percent blind run.

While gathering feedback, one of the biggest issues I detected was the disappointment our players felt when getting to an ending and realizing they had to start all over again. Not the lack of "progress" since they unlock achievements and gallery items and stuff, but the lack of "feeling of progress."

I came up with the idea of different introduction texts based on your last ending to connect each run with the next one with some excuse (e.g: "After falling into the pit, the elder brought Tim back home and resurrected him with a spell") and it worked like a charm. Having a few lines explaining to the player what happened between runs not only increased the immersion and engagement, but nearly killed the lack of feeling of progress.

Even while it was very effective, having tons of different endings meant the effect eventually wore off. At some point, it was apparent for the players that it was an artifact we introduced as an excuse to put them back to square one.

To make the story "real," we added what I call "persistent elements", which are just parts of the world that change based on your actions. E.g: Were you crushed by some trap? You'll find some blood there next time. Did you blow something up? You'll find a crater next time.

Most of these were merely aesthetic, but worked incredibly well in giving the player a sense of impact in the world.

We went a step further and built this feature into the player character itself, turning it into a persistent element as well. Did you fall into a pit of spikes? Next run you'll be covered in spikes. Did you just die and had your cat swear to take over your legacy over your grave? You play as the cat now.

All these pieces, glued together by some "everything went (almost) back to normal" design guidelines, shaped Reventure into what is today. We couldn't be prouder about how it turned out.

The game worked handsomely at this point, but we didn't stop there. We added some extra sugar on top with the Twitch integration that enables streamers to roleplay with their audience and a ranking system disguised as the percentage of players that have achieved your number of endings or more between runs. 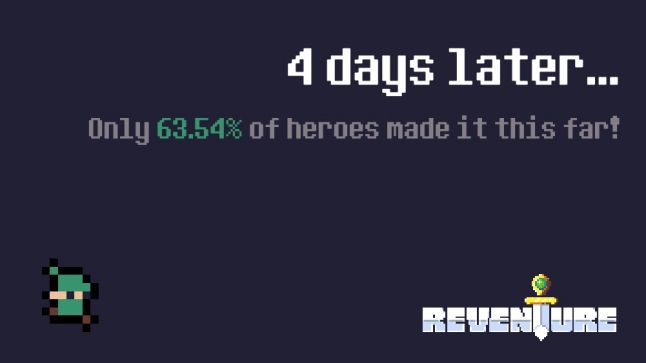 TL;DR: Get your game in front of your players ASAP. They'll show you some things right away that you won't see in months (years?) and they'll indirectly turn the game into all it can be if you know how to listen.