Five (more) books on urbanism, city history, geography, planning, and a bit of burglary for game devs and designers looking to create their very own imaginary and interactive cities.
Konstantinos Dimopoulos
Blogger
October 06, 2016 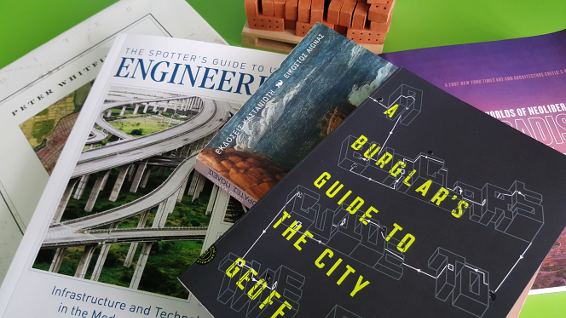 Feeling that five books can never be enough --let alone cover the bare essentials of applied imaginary urbanism-- here is a list of another five books that will hopefully help you further understand cities, and design or tweak the ones about to appear in your game. It is, mind you, a proven list of books that has already assisted me in tackling the game worlds of a variety of projects. So...

Let's start with a classic; none other than Italo Calvino's literary masterpiece Invisible Cities. Though far from a technical handbook, this rather famous work is the darling of each and every urbanist, planner, and/or city geographer I have ever met. It follows Marco Polo as he explores dozens of fantastical, whimsical, and wildly imaginative cities, and describes them to the ageing Kublai Khan. Each city is fundamentally different to the other ones, and over the two or so pages that are dedicated to it, explores a different idea. One city might look like a ship from the desert and a camel from the sea, whereas another one might be hanging over the abyss, or be sitting atop a huge necropolis mirroring it and encompassing its past. Each of said cities could obviously help inspire an entire game world by itself, or even allow us glimpses at the reality of the human condition or, at the very least, its built expressions.

A Burglar's Guide to the City by Geoff Manaugh wasn't what I expected it to be, and though it really does help with providing a vastly different approach to viewing the urban environment --as a burglar and thus as someone not constrained by doors and the accepted use of urban space-- it isn't as thorough and methodical in its approach as I would have liked it to be. Still, the Burglar's Guide is a fine source of inspiration, and, unexpectedly, a very handy tool when it comes to actually approaching level design on the city level. The fact that it made me think of other alternate approaches to the use of urban space --say by a beggar, a dissident, or a prostitute, to name a few-- can only be considered a good thing.

If you are working on a dystopic setting though, what you simply need to read is Evil Paradises (edited by Mike Davis and Daniel Bertrand Monk). It is a provocative, varied, and thought-provoking collection of texts, focusing on the horrible utopias pure capitalism has created for itself in cities, deserts, and even the oceans. A multi-faceted examination of how the (impressively innovative) utopia of the rich is bound to become the dystopia of the poor, the book covers places from Dubai and Orange County, to Kabul and Beijing. It features the words of urbanists, geographers, architects, planners, historians, and even China Miéville.

The Spotter's Guide To Urban Engineering was suggested to me by former PC Gamer US editor Logan Decker, and, despite trusting the man's taste and knowledge, I frankly didn't quite know what to expect. Happily, I ran into an excellent book covering everything regarding the foundations of the modern city. Everything I was taught when studying to become an engineer has been condensed, illustrated, and brilliantly presented in a way that will make sense to all sorts of creative and not-so-creative people. Infrastructure, materials, technology, roads, nuclear plants, communication networks, sewage systems, and all sorts of other mostly ignored crucial bits of the urban tissue get presented in a useful, and, most importantly, implementable way.

Cities of the World - A History In Maps by Peter Whitehead does exactly what it says on the cover. It crams centuries of global urban history into its couple hundred lush 9"x12.2" pages, and shows it off with short texts and some wonderful cartography. Major cities across all continents are showcased, and unique insights into their history as well as the whole of the history of cities are provided. As for the 16th century map of Venice by Ignazio Danti you'll find in this book, well, it's a masterpiece.