The year in video games has been something of an explosive blur that I cannot quite put words to.
Game Developer
Staff
December 18, 2015

Katherine Cross is a contributor to Gamasutra

The year in video games has been something of an explosive blur that I cannot quite put words to. But as a critic I’ve been keeping watch for games that do something different, even if it’s a small but well-placed twist on an established formula, or telling a new kind of story using game mechanics.

I’ve been to several conferences this year, from PAX East, to GDC, to IndieCade and GaymerX, and all have shown me a vibrant indie gaming community that is acting as a laboratory of forgotten dreams. Some of my favorite entries from that community made it into my Games of the Year list; but the triple-A sphere has also lurched forward in fascinating ways this year, telling new stories with new takes on old game mechanics.

Reinvention seems to be a theme of the games I loved the most this year; in so many ways they use existing game design techniques and mechanics to do something dramatically different. What links my choices this year is the way there seemed to be an effortless unity in the games’ mechanical design and the narratives they were putting forward, to the point where one not only helped the other but became the other. Each of these games is a stark reminder that you do not need to reinvent game design in order to do something excitingly original. 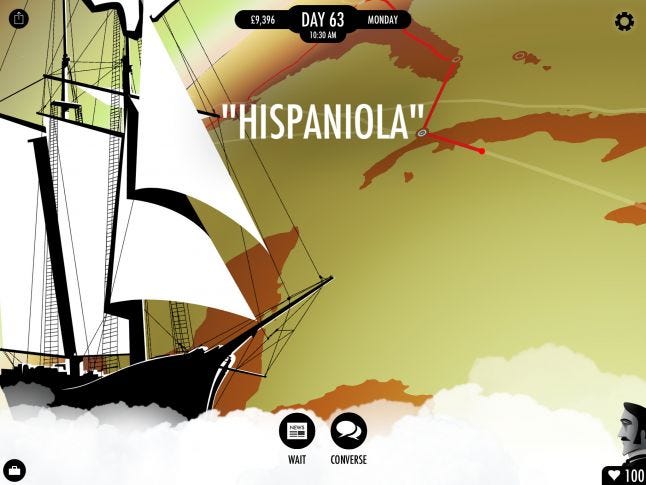 Earlier this year I was jokingly calling my iPad Mini my 80 Days machine because it had become practically the only thing I used the damn thing for. The seemingly simple interactive fiction and inventory management game, based on Jules Verne’s classic Around the World in 80 Days, sees you take on the role of Phileas Fogg’s redoubtable valet Passepartout and manage their globe-circling adventure in a steampunk world gone haywire. The game, first released in 2014, contains multitudes that make a firmament of its myriad locales, dotting the world map in a constellation of possible journeys. An expansion released this year, however, coinciding with the release of the game for PC and Mac on Steam, added a wealth of new content to the game that expanded richly on its core themes and made even more of the world playable.

The peerless writing of Meg Jayanth gives us a colorful world that makes the most of its diverse settings, eschewing the imperialist overtones of the source material and writing vivid, memorable characters in their stead. People of every race and creed make an appearance as complex and compelling characters, many with their own questlines and stories that add to the riotous adventure of Fogg and Passepartout, to say nothing of all the amazing women you can meet along your travels: from muscular airship captains, to the elegant thief The Black Rose, to a cunning Mongol scientist, to princesses and stowaways, to a literal ship, Jayanth’s writing triumphs as a tapestry of humanity that this year’s Americas expansion only enhanced.

New storylines and new lore abound, mostly centered in North and South America; the Black Rose--a creation of inkle founder Jon Ingold--was introduced and given arguably the best storyline in the vast game; Jayanth’s extensive additions to the lore of Native Americans and First Nations people see the creation of railroads, flying cities, and several exciting new characters. It all made a fantastic game even better, just as it introduced it to whole new platforms and audiences. 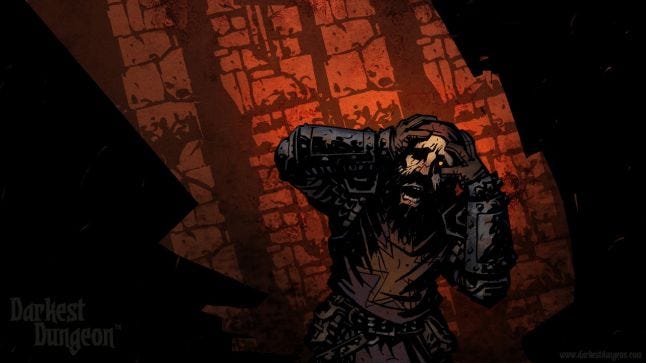 I tend not to be a fan of self-styled “hard” games; one too many of them tend to be onanistic nostalgia for a never-happened era in gaming that is meant solely to flatter the player’s preconceived notions of themselves as“hardcore.” Red Hook Studios’ Darkest Dungeon is a genuinely mature take on the hard game, however, and uses its difficulty as an expressive mechanic to atmospherically represent its grim, Lovecraftian setting.

The world is dark, hope is a dying ember at the campfire, and you the player act as the scion of a fallen house recruiting an endless supply of mercenary adventurers to do your bidding as they attempt to recover your faded glory. It’s beautifully brutal; this 2D roguelike sees you control a party of differently-classed adventurers as they explore your family’s erstwhile grounds, recovering treasures, precious information, and clearing out the malevolent squatters who’ve set up in your absence. The RPG gameplay here is unyielding in its harshness; healing is parceled out in tiny numbers while critical damage can dash your hopes in a hot second.

None of this feels like wank, however. Darkest Dungeon is thematically consistent from start to finish and its unforgiving gameplay is an extension of its setting. Further, the game manages to use its procedural generation in a fascinating way that makes you actually care for your recruits. Throughout the game each adventurer acquires a list of buffs and debuffs that range from religious zealotry to claustrophobia to gambling addictions, and it turns these adventurers into people you can care about, with story arcs that may end buried six feet under. It’s the final, brilliant twist of Red Hook’s knife. This game was worth every aggravating second I played. 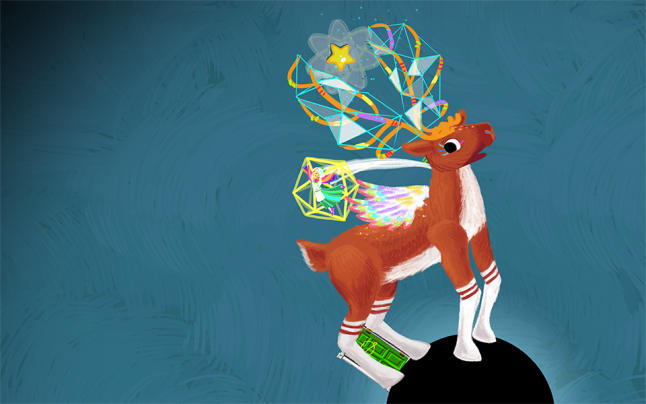 Ivy Games’ Gravity Ghost is that rarest of titles that seems to effortlessly balance challenge with unmitigated joy. As I said earlier with Darkest Dungeon, difficulty for the sake of difficulty tends to be executed poorly in games; but when combined with expressive purpose it can brush the stratosphere of genius. Gravity Ghost has made that stratosphere its playground.

You play as Iona, a ghostly girl flying and ricocheting through a nightsky of beautifully handpainted planets. You use the gravity of celestial objects like planets to slingshot you into the sky, where you capture the stars you need to unlock each new level. Although you learn new and different navigational skills over time, Iona always remains cheerfully in thrall to the pull of those adorable little worlds.

Some of these levels are simple but others require careful planning and strategy; above, all, however, the challenge lies in your willingness to let go. This is a game where fixation on minute details and constant course corrections will ensure you fly aimlessly for eternity. You can’t “die” and there is really no game-over or lose-state, so you’re free to experiment without pressure--save for certain levels which use timed challenges.

But the greatest trick here, which expresses something profound about the game’s story, Iona’s character, and Ivy Games’ whole philosophy is that you have to trust the universe not to hurt you and let it help you achieve your goals. You do not win by mastering precise moves that require hyper-sensitive inputs, you win by learning to trust both your instincts and the gravity of the planets and stars Iona flies around. Instead of seeing Iona as a lone figure battling these impossibly powerful gravity wells, I saw her as kindred with them, playing with friends in the night who would always catch her if she fell.

Without spoiling the game’s enchantingly drawn and acted story, this conceit says a lot about Iona’s personality. A universe where every cosmic animal is a friend is exactly the kind of place Iona deserved, which you come to realize when you learn why she is a gravity ghost in the first place.

I’d never played anything like Gravity Ghost before and I fear I never may again; it polevaults effortlessly into being my Game of the Year, like Iona herself slingshotting around a gas giant. 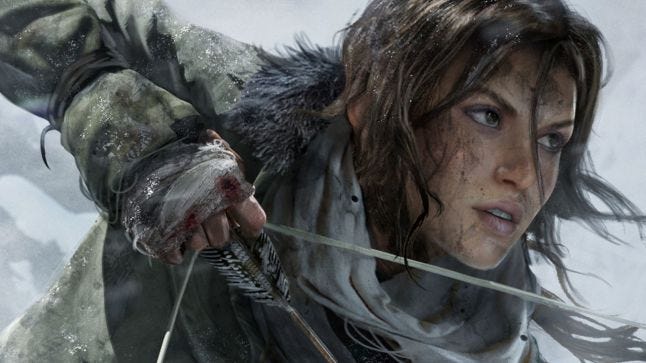 I decided to limit myself to two triple-A titles this year, strong as the temptation was to put Fallout 4 or Witcher 3 here, they will indisputably get their due elsewhere. Rise of the Tomb Raider will too, I suspect, but there are interesting things to say about it that gave me a new gaming experience, unlike the big RPGs which mostly recapitulated fun experiences of the past. While the depths of Lara’s character remain something of a mystery to us, she has been indisputably reborn in dramatic fashion with this reboot and Rise does everything right in both preserving and expanding upon what made its 2013 predecessor so incredible.

The world feels so vast in its grim charisma that it threatens to swallow you up; you’re blessed with a range of destinations and activities that seem to build on Tomb Raider’s Yamatai and its quasi open-world design. In its varied gameplay, Rise seems to veer into action-RPG territory, which I consider a significant positive. In addition, the game further extends its archaeological conceit: there are plenty of ancient letters and artifacts to dig up, but Lara can now get her polyglot on as learning languages becomes increasingly important to understanding the significance of her finds. Whether it’s reading Ancient Greek plinths or understanding faded Soviet propaganda, the language skill adds an intriguing dimension to the game for me. Although it’s a bit transparently gamey, it still expresses a commitment to Lara’s academic pedigree in this reboot that is worth praising.

Oh, and, who doesn’t love firing headshots with a bow and arrow that you built and upgraded from the wilderness? 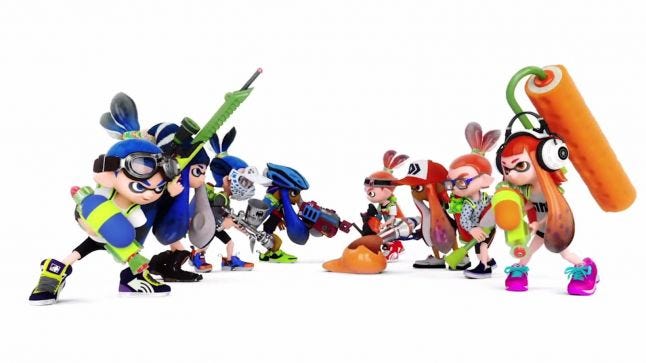 Every once in a while a game comes along that makes a slight change to a popular formula and reinvents ludic reality in the process. By taking the basic structure and gameplay of competitive FPSes and making a small tweak to the conceit, Nintendo’s Splatoon created a fabulous all-ages multiplayer shooter that is surprisingly nonviolent. The adventures of the adorable squid kids who star in the game has produced a bottomless, purple- and orange-colored well of memes and in-jokes, a small sign of the vibrant fan community the game has produced.

In so many ways, it’s the embodiment of the late, great Satoru Iwata’s mantra: “Above all, video games are meant to just be one thing: Fun for everyone.” Splatoon was a risky new IP for Nintendo but one that has paid off spectacularly well and proven that Nintendo’s accessible, games-for-everyone platform remains as vigorous as it was at the dawn of the Wii era.