The top 5 games of 2015 from Gamasutra assignment editor Chris Baker - featuring a long-winded digression on the rise of crowd play, an embarrassed Toys to Life confession, and more.
Kris Graft
Publisher
December 18, 2015

I didn’t have as much time as I’d like to play games this year, so my list is skewed towards shorter, more snack-sized experiences. There are plenty of other games that I played and found to be deeply engaging, but didn't invest enough time in to confidently pass judgment on them. Apologies to Cities Skylines, Bloodborne, Witcher 3, Fallout 4, Pillars of Eternity,et al.

To my mind, the two most interesting game trends of the year were the arrival of VR and the continued rise of crowd play games. The Twitch Plays Pokemon phenomenon did not adequately prepare me for the amazing Twitch Plays Dark Souls. I was very intrigued by Upsilon Circuit. And after spending a lot of time researching and writing about game crowdfunding this year, I've come to see it as inextricably linked to the crowd play phenomenon. Smart designers have managed to turn the fundraising experience into a sort of a game in and of itself. Look at the Kickstarter campaign for Bloodstained: Ritual of the Night! Look at the achievements that backers could collectively earn, and the unlocks that those achievements granted! How was that not a game?

But I digress. Here are my Top 5 picks (in alphabetical order):

Her Story by Sam Barlow 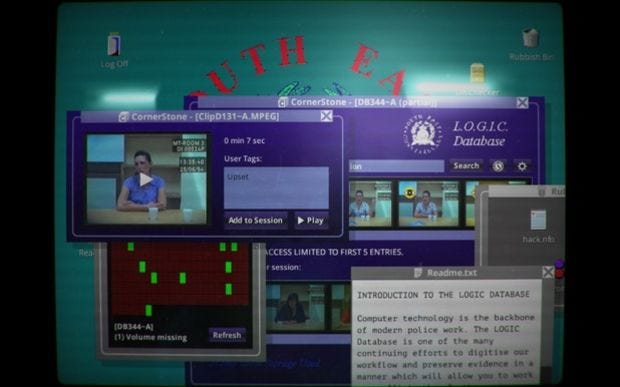 You can find great game design where you least expect it. Case in point: Full-motion-video games, which I associate with Night Trap and Sewer Shark, produced the most compelling couple of hours I spent with a game this year.

I love that Her Story makes an incredibly compelling play mechanic out of something that I do 50 to 100 times a day--typing words into a search field. I love that even though I stumbled upon the central reveal almost immediately, I still felt compelled to play through the rest in one sitting, hoping to uncover every detail of the story. I love Viva Seifert’s brilliantly subtle and nuanced performance. I love how Sam Barlow carefully constrained the story to make it so much more compelling. And I love the song. 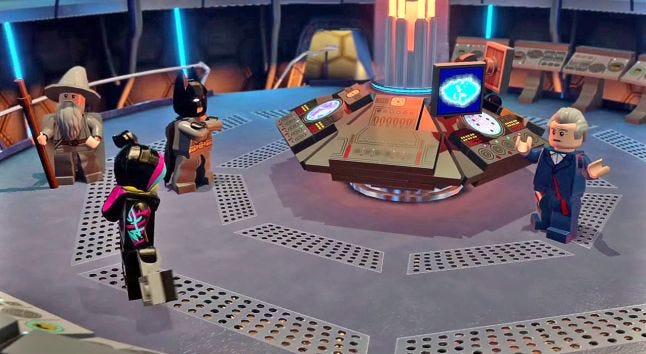 This isn't an endorsement; this is a confession. I have not previously admitted to my Gamasutra colleagues that I'm really enjoying this game [OMG!!! - ed.]. I’ve always been deeply suspicious of--and resistant to--anything related to 'Toys to Life.' I scoffed at people who lined up outside stores to fight over Amiibo and Disney Infinity characters, and I pitied all of the poor saps who scoured eBay for rare Skylanders figurines.

But I was blindsided by Lego Dimensions, and I’ve spent far more time (and money) than I care to admit with it. I’d always enjoyed the wry humor and the deep fan service that Travelers' Tales wrung out of famous properties in their previous LEGO games. (As fans know, the real fun begins after you finish the storyline, and then go back through unlocking the enormous roster of obscure characters.)

Dimensions is a uniquely impressive feat of crossbranding, but it’s also the apotheosis of everything that Travellers' Tales has ever done in brickworld. And while other Toys to Life franchises use the physical toys in a simplistic manner--you scan them into the game as if you are swiping a credit card--in Lego Dimensions, deploying and repositioning toys is an actual play mechanic. The gameplay is varied and interesting, and the deep cut fan service and in-jokes for franchises like Valve's Portal, The Simpsons, Wizard of Oz, and Back to the Future are priceless. (I won't spoil any of it, except to note that when you die repeatedly as Doctor Who, you go through all 12 incarnations, and they each have their own TARDIS interior.) 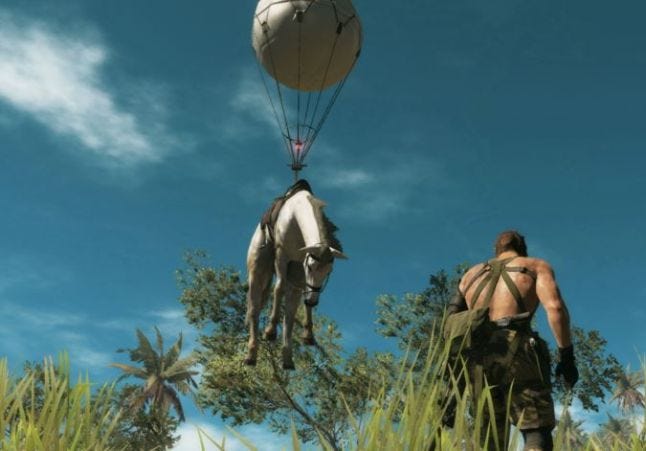 After the mindboggling intro section, this quickly settled into something that felt very reminiscent of Red Dead Redemption to me. I mean, I'm summoning my horse and riding around a scrubby mountainous region, trying to decide whether to do a major mission or a sidequest, pausing to pick plants, etc. About four or five hours in, it stopped feeling like a mashup and started to feel like its own unique experience. It was so much richer and more solid than any other open world game I played this year. This is now my favorite MGS games since the original. (Replacing MGS 3: Subsistence.) I eagerly await the next game from Kojima Productions. I figure it'll probably be out in a few months, right? Have preorders gone up yet? 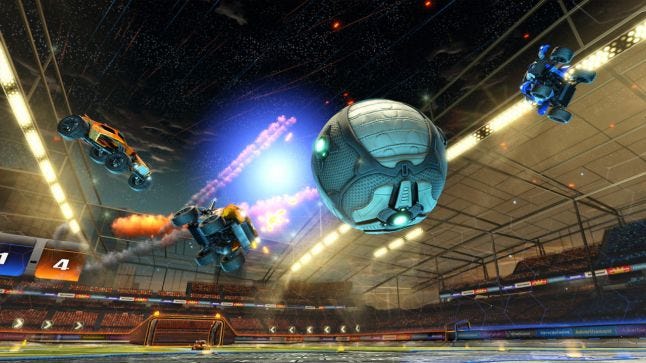 My right index finger was kiling me, and I didn't know why. Had I jammed it? Did I slam it in a door or something? It ached, it twitched, it curled up when I didn’t want it to. I hadn’t experienced this specific sort of discomfort since the year 2000, when some friends and I stayed up all night trying to finish the Crazy Box minigames in Crazy Taxi, and...and I’m so stupid, I didn’t realize until the moment that I made that connection that the pain I was now experiencing was Rocket League-related. I was squeezing the R2 trigger on my DualShock 4 far too hard, just trying to eke out a little bit of extra acceleration as I sped downfield. I was squeezing the damn accelerator to the point that it was having a debilitating effect on my digit. I’d promise myself that I was going to take a few days off so that I didn’t permanently lose the ability to point at things or pick my nose or make that douchey finger-gun gesture...but then I’d backslide immediately. Psyonix did everything right with this game, including not naming it Supersonic Acrobatic Rocket-Powered Battle-Cars 2.