From Bloodborne to Her Story, Gamasutra editor Alex Wawro continues our end-of-the-year series by sharing his thoughts on some of his favorite games of 2015. Brace for opinions.
Alex Wawro
Blogger
December 16, 2015

Gamasutra editor Alex Wawro continues our end-of-the-year series by sharing his thoughts on some of his favorite games of 2015.

This year, like all the years before it, did not bear witness to the release of the Best Game.

Many beloved games were released, certainly, alongside many that were inventive, frustrating, charming and terrifying -- some in equal measure. Incidentally, I still haven't had the courage to pick up Soma.

Partly, that's a practical concern -- this is the time of year I tend to wind up at a lot of parties talking to strangers, so it's good to have a ready answer when someone asks the inevitable: Oh, you work in games? That's cool. What are the good games right now?

Here, then, are some of the good games right now. Some of my favorite games, even. Each of them left a lasting impression on me, for different reasons, and all are worth celebrating as standout examples of game development.

Bloodborne by From Software

Much was written this year about how satisfying it can be to throw yourself against Bloodborne’s arcane systems until you master them, so I’ll try not to belabor the point here. Bloodborne just works for me, in much the same way From’s Souls games do, though with some significant change-ups in its core design that I really appreciated.

By designing smart new systems like the vampiric health-regain mechanic while eliminating (or at least drastically toning down) established safety nets (think: blocking and magic) Bloodborne’s developers made something more approachable than the Souls games that simultaneously forced series fans to master new ways of overcoming challenges within a familiar framework. They drove me out of a comfort zone, and I loved it. 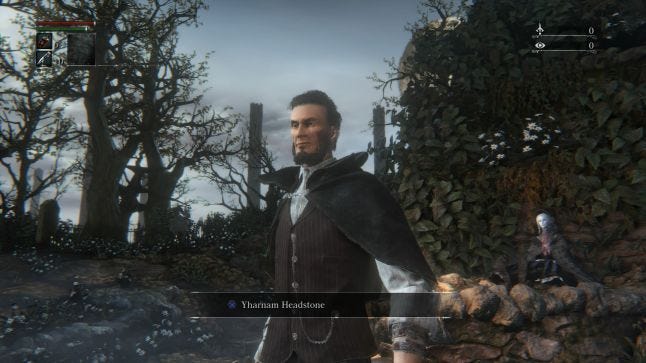 Someone made Abraham Lincoln, Bloodborne hunter, because of course they would

There’s also a welcome tinge of the surreal coloring Bloodborne that I wish was more commonly explored in big-budget game design. Bloodborne reminds me of surreal fiction (think: Murakami novels) in a really good way. As I returned to this game throughout the year there were moments where elements of Bloodborne's design turned in a way that caused me to question my own perceptions of what was (within the game, at least) real and true.

I loved Dark Souls partly because it was designed to feel like a real place, with each area connecting to the rest in a way that seemed believable and real. I love Bloodborne partly because it seems surreal by design, with creatures and paths subtly shifting and changing in a way that made me question whether I’d ever really seen them before.

Her Story by Sam Barlow

Games can be many, many things. Somewhere on that vast spectrum rests “interactive drama”, the sort of ideal video game you can quickly rattle off to acquaintances as an example of where the medium shines. Games can be just as affecting, just as entertaining as a great work of film or television, you say; the only difference is, you get to actually play a part in a great game.

Her Story is like a great TV drama you get to be part of. Sam Barlow’s writing is excellent. Viva Seifert’s performance is sublime. The way the game's design presents both to you in chunks that can typically be pieced together in an hour or two, yet allows plenty of room for brilliant bits of deduction or intuition, is fantastic. 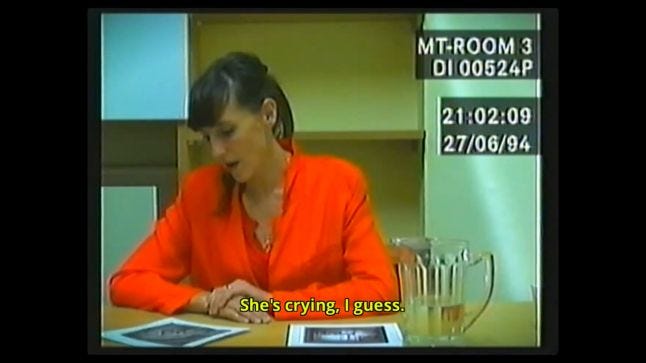 Playing through it, I felt trusted as a player. I felt as though the game was designed with faith that I would find my own reasons for playing through it, and my own conclusions from the story I eventually pieced together. I can’t be sure if that feeling was what Barlow intended, but it was a welcome one.

Klei continues to impress with both the quality and the diversity of the games they create. I love the cyberpunk themes and turn-based tactical stealth systems underpinning Invisible Inc.’s design, and the fact that it's Klei's follow-up to the excellent and totally dissimilar survival game Don’t Starve -- itself a complete departure from its predecessor Mark of the Ninja -- is laudable.

"Choice" and "consequence" have become watchwords of game development, and Invisible, Inc. is a master class in how they can be made meaningful in turn-based game design. The fact that Klei managed to balance Invisible, Inc. well enough that in 20+ hours and many, many procedurally-generated maps I never once felt faced with an insurmountable or even particularly unfair challenge is remarkable. The fact that they pulled it off with such an impeccable sense of style -- from the cutscenes to the dialogue to the in-game item descriptions -- is charming as hell. 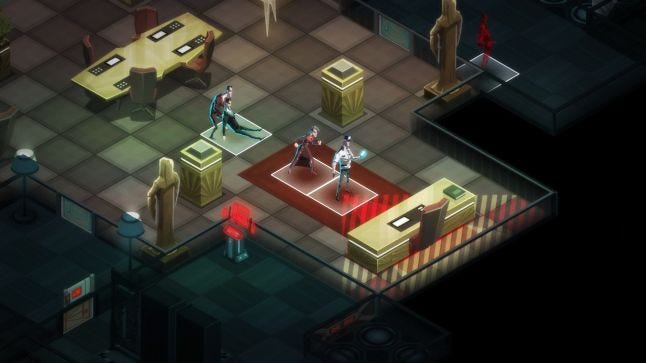 Here's a quick example of what I'm talking about: Invisible, Inc. has great stun design. For the lion's share of the game, your agents' primary means of interacting with their antagonists will be the pointy end of a taser. But whereas in most games a successful stun would knock an enemy out permanently -- rendering the taser as effective as a knife to the ribs -- here Klei has designed a very strict system of stun timers that ensure you have to move very quickly after stunning someone or risk having them wake up and compromise your mission.

But -- but! -- you can effectively "pause" those super-short stun timers by having an agent post up on top of an unconscious guard. Such a choice eliminates that agent's err, agency, in the mission, but it buys the rest of your team valuable time to work. Every turn of every mission in Invisible, Inc. requires you to make these sorts of decisions, and each one feels absolutely mission-critical. It's a brilliant piece of work.

The Magic Circle by Question

I played a few games this year about game development -- The Beginners Guide, The Writer Will Do Something, The Magic Circle -- and all of them offered an interesting take on themes like authorship, creativity and a creator’s relationship with their audience.

You should play them all if you can, but as the year snaps shut around us it’s The Magic Circle that I remember most fondly. Question’s game about game development has some real bumpy bits, but when I played through it earlier this year I walked away with a smile on my face and a passion to make something of my own.

Part of my fondness for the game stems, I think, from how willing its creators are to lampoon themselves and the game industry at large. There’s a whiff of catharsis underlying the comic tragedy of The Magic Circle, as though its creators were itching to let some hot air out of the game industry, but that’s mostly tied up in the narrative; by design, The Magic Circle revels in the joy of creation, encouraging players to experiment with its systems and mechanics in order to fashion their own solutions to problems.

For taking game development down a peg or two, yet leaving me more passionate about its possibilities than ever, I'll remember The Magic Circle as one of my favorite games of the year.

I have a lot of problems with The Phantom Pain. The writing, the character design, the online multiplayer component and the monetization systems leave a lot to be desired. But when I look back over a year that saw a surprising number of great open-world games released, it's still The Phantom Pain that I remember most fondly.

For all its flaws, Kojima Productions' final project under Konami's banner is a fantastic example of how a big team can augment and improve upon an established franchise with contemporary design elements while keeping the core game's unique strengths intact. 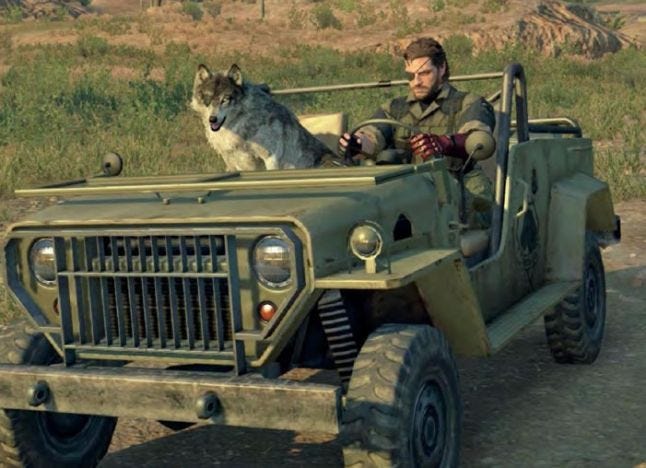 Audio logs. Base-building. Sidequests. Companions. Crafting. Fast travel -- sort of. Name a well-regarded element of modern game design, and there's probably a tailored version of it built into The Phantom Pain. Yet the final product feels of a piece with previous Metal Gear games, building upon their weaknesses without obscuring the idiosyncracies -- from overblown cinematics and hyper-dramatic twists to megalomaniacs piloting giant robots -- that have become the series' calling cards.

It's not quite as systems-rich as I'd like (then, again I was a fan of Snake Eater and its hunger/injury mechanics) but I'm hard-pressed to think of a game this year that better communicates, through mechanics alone, the feel of being a lone soldier in a hostile wilderness.

I've met a few people at parties this year who worried that Japanese game development has become somehow stagnant, outmoded, and too inward-facing to succeed in a global game industry. I don't think that's true: The Phantom Pain is an outstanding example of craftmanship and attention to detail in big-budget game design, and it stands alongside other 2015 releases like Splatoon, Bloodborne, Xenoblade Chronicles X and Downwell as a sterling example of both the scope and skill of modern Japanese game developers.

Honorable Mention: Everyone who shipped a game in 2015. I say this every year, and I mean it: game development is hard work, and it deserves to be recognized.