"We wanted a kind of connection between the player and their surroundings, and this connection reaches its peak during the concertos where the character and the scenery come into harmony."
Chris Kerr
News Editor
July 14, 2021

Symphonia, which received a nomination for Best Student Game, explores a world made from music and musical instruments, platforming through it with a violin and bow.

Gamasutra spoke with the team behind the game to talk about how this concept came to life, how this world of musical instruments affected the design of the platforming, and how this idea would shape the music and sound effects of the entire experience.

Who are you, and what was your role in developing Symphonia?

We are a team of 13 people (1 programmer, 3 gameplay programmers, 1 sound designer, 4 game artists, 3 game designers, and 1 producer) and we now represent the studio Sunny Peak. We won't present ourselves one by one because that would make the article very long, but you can learn more about each member of the team on our website.

We are all from the same school (ISART Digital Paris), but we all have a different background. We all had experience from internships, but our desire to create games goes back much further. It was only when we were in our final year that we started to create Symphonia. 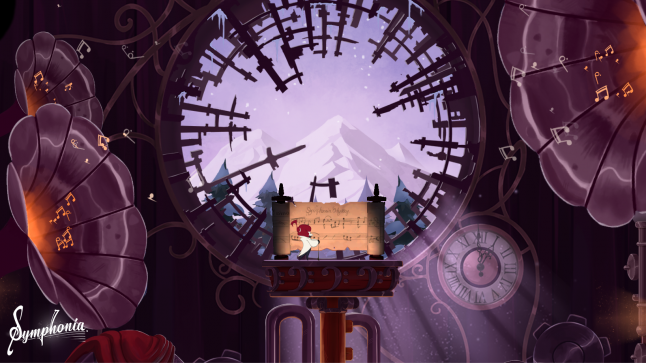 How did you come up with the concept for Symphonia?

The concept of Symphonia came from Quentin Vernet, the lead gameplay programmer. His biggest inspiration on the pitch was a boss fight in Mario Odyssey where you had to use a Pokio to kill a giant robot.

Consequently, we thought of using a spear for the main character to define his moves and action sets. The idea was to renew platformer basics and to put a tool at the center of the core mechanics. Simultaneously, our character was portrayed in a gigantic universe with which he could interact. In the beginning, there was simply no Philemon! We thought of a small warrior or messenger in charge of a great feat to accomplish. Where we have the world of Symphonia now, we used to think about enormous colossi our former character would have had to climb to achieve his goals!

What inspired you to make a platformer that involved using violin skills?

We kept the initial pitch of the game in mind. What appealed to us in the beginning was to center the experience around a tool used to move around and perform various actions. When we realized that our former universe and character were not unique and different enough, we moved to gathering new ideas. And then came the possibility of having a virtuoso using an instrument.

It’s an easy way to give personality to a character, and we wanted to make him really fun to control, similar to a toy. So, an instrument was a good compromise. In addition, when I pitched the game, what really stood out to the jury was that you could interact with the environment, and an instrument seemed the best way to do so. 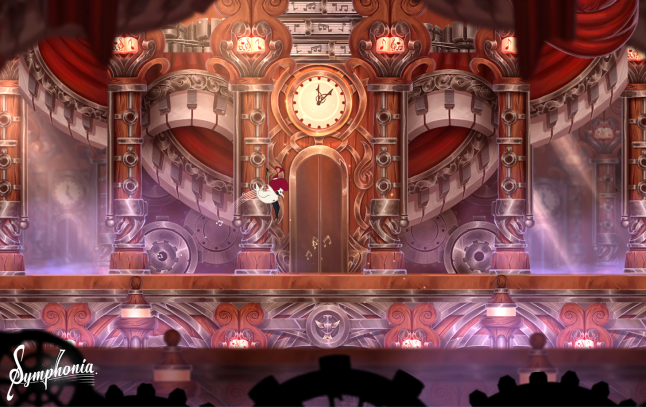 How did you design gameplay activities and situations around those skills? Around music and musical instruments?

The musical part was a challenge because when you use your instrument you don’t move, so we needed the right context when using it. We had really talented environmental artists but fast gameplay, so we thought it was a good idea to alternate platforming and more contemplative segments for the game. You mostly play music in the best looking rooms of the game, having a delightful, relaxing and rewarding moment after completing tight platform challenges.

And quite surprisingly, as soon as we defined the violin and its bow as the sole instrument Philemon would use, many situations and ideas arose. Playing music is the simplest one, but we let our imagination roam free to design imaginary and fun ways to use the instrument. The more unexpected the situation, the more surprising and pleasant for players!

With such a focus on music, what ideas went into the game's audio design? What made it feel right for your game's themes?

Since our character is a violinist, the idea was to put the violin, and therefore the strings, in the spotlight of the music composition and sound design (a lot of UI sound and feedback is made from the instrument, either in a musical or noisy sense). When Philemon took its final form, the idea of using wind instruments came up in order to reflect the look and gestures of the bird. Similarly, the use of musical instruments for sound effects became an obvious choice and guided the sound production throughout the project, providing a beautiful orchestral-like texture.

As for the music, it is inspired by the romantic and modern movement, and features a progressive awakening of the environment through a fantasy that also characterizes the world of Symphonia. It was imagined as an integral part of this world, and is even its source of energy. It is this search for coherence between the music and the sounds produced by the environment that gives this atmosphere its charm, as if we were moving directly into the depths of a giant musical instrument. 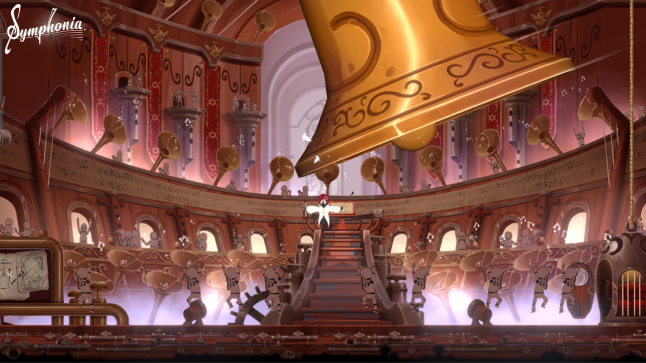 What thoughts went into creating the game's worlds and visual style? Into creating worlds with the inner workings of instruments?

Most of the visual decisions were made by our artists, but when the game was pitched, it was supposed to be a sailor navigating and interacting with a gigantic whale. We scratched that idea, but the gigantism and the interactions stayed.

As for the artistic direction, it naturally came with the game’s universe. We centered our iterations and our work around the word 'interaction'. Our artistic choices logically stemmed from our reflection on character and universe interactions. But we obviously have been influenced by flagships licenses and our respective artistic styles.

What feelings/thoughts did you hope to evoke in the character through the game's story and experiences?

We aimed for a melancholic tone that slowly give way to a more energetic one as the player and the city become more and more carried by the music. The more the player progresses, the more lively and large the environment becomes.The emotions come mainly from the environment. We wanted a kind of connection between the player and their surroundings, and this connection reaches its peak during the concertos where the character and the scenery come into harmony.

We use every aspect of the game to communicate our emotions. Some areas will evoke curiosity through the music and environment, others will evoke perseverance through the gameplay...

We have also deliberately left the narration vague in order to suggest the story rather than overwhelming the player with a lot of dialogue.